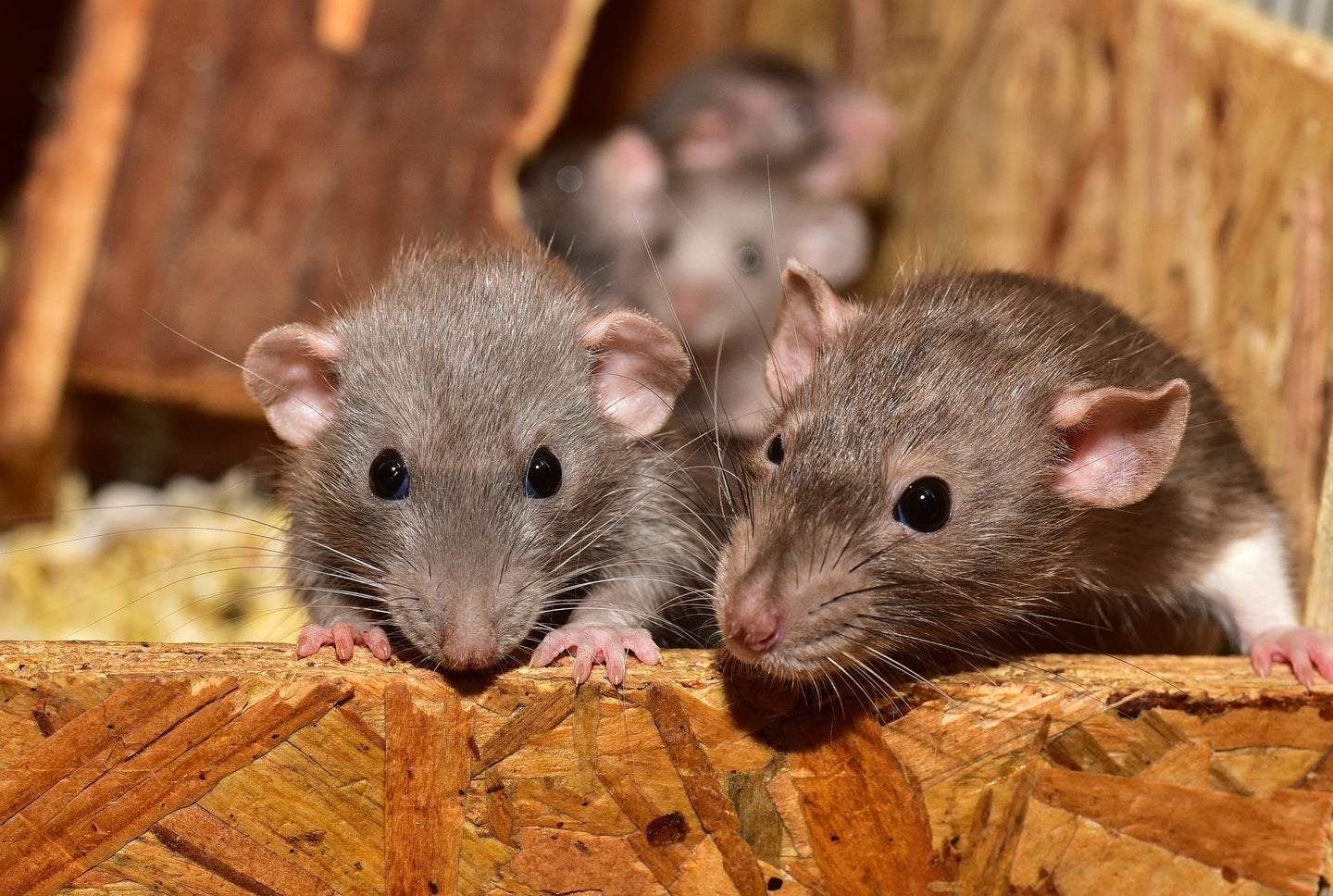 Here’s the thing: Rats can’t vomit. Rodents as a general rule, don’t puke. That’s why most available rat poisons contain chemicals that induce vomiting; the urge to let out a technicolor yawn will save most humans and pets from getting an accidental dose of pesticides, but it doesn’t do diddly squat for a rat.

Vomiting is a super common evolutionary tactic, and it’s one that makes a lot of sense. When toxins get into our bodies, our bodies try to push them out. It’s simple! It’s elegant! It’s gross! It works! And rodents just… don’t do it. Instead, they have a super intense gag reflex. When rodents taste something unfamiliar or otherwise suspicious, they reflexively and definitively spit it right out. Blech!

Now that humans have come to understand this strange biological quirk, we’ve come to use it to our advantage in the lab. Scientists are always trying to get better at studying nausea—just look at the puking robots they’ve designed to hurl chunks on command—because our species’ tendency to vomit can have dire consequences. During chemotherapy, for example, the common inability to keep food down can seriously impact a patient’s chance of recovery. The mechanisms that make us more or less likely to throw up are still pretty mysterious, too: some cannabis users, for example, suffer extreme nausea after smoking, even though cannabinoids are frequently used to make other people less queasy. The fact that rats reliably gag—but never actually vomit—makes them a perfect model organism for studying nausea. Scientists can test different ways of mitigating the urge to purge without having piles of puke all over their labs.

Let’s circle back to the fact that rat poison is designed to use rodents’ evolutionary trick against them. If you’re wondering why rodenticide still shows up in fiction as a tool for doing murder, that’s because we used to make pesticides out of obscenely toxic substances. A century ago, ingesting household pesticide—or even touching it without gloves on, in some cases—could absolutely kill you. While it’s still a good idea to avoid direct contact with pesticides, and it’s very important to keep them away from small children and pets, we’ve fortunately found pest-control compounds that are much less likely to cause us harm in the small doses that kill mice and rats. Plus, now that we know that rats can’t puke, the addition of emetic agents has become a common tactic to make rodenticides safer.

Fact: The James Webb Space Telescope is the most powerful telescope ever created

JWST​is a groundbreaking space observatory that launched on Christmas day last year and is currently orbiting a spot a million miles away from Earth. It’s designed to see deeper into the universe than we’ve ever seen before. Looking out into the cosmos is also a chance to see back in time because light takes so long to reach us — so if we see something a million light-years away, that’s what it looked like a million years ago. JWST, an infrared optimized telescope, is so sensitive it can detect the heat of a bumblebee as far away as the moon. We’re hoping it will be able to see far enough away to detect the first light of the universe after the Big Bang.

Giving birth when you are an octopus is a fate worse than death. After laying her eggs, octopus moms die slowly and dramatically, self-harming until they meet their bitter end. After laying eggs, a female octopus goes from living a normal life and gently caring for the embryos to no longer eating, dropping muscle tone, changing color, and even engaging in acts of self harm (like eating her own body parts).

Generally the timeline after death looks something like starvation or reduced food intake over time, and in an extreme case, deep-sea octopus Graneledone boreopacifica, brooding can take up to four years and basically the octopus mom guards her eggs as her body slowly withers away. Octopus hummelincki, which have been studied before for this mechanism, typically don’t live longer than 9 months in total and don’t have more than 2 months post-eggs.

There have been a lot of questions about why this happens. Is it triggered by the lack of food? Or is some kind of ‘self destruct’ built into female octopuses? Back in the 1970’s, psychologist Jerome Wodinsky started to take a deeper look at what kind of signals in the octopus body could be linked to the whole self-destruct idea. And after a somewhat accidental expiriment of getting female octopuses drunk and removing their sex glands, he discovered that minus sex-glands, octopus moms thrive after birth.

Research from this year broke down the chemicals that the optic gland was producing around the time of the octopus mother’s behavioral break. Researchers found three specific pathways light up: The first produces pregnancy steroids pregnenolone and progesterone; the second produces components for bile acids; and the third produces increased levels of cholesterol-precursor 7-dehydrocholesterol (7-DHC).

Elevated 7-DHC levels are linked directly to a human disorder called Smith-Lemli-Opitz syndrome, which can affect mental development and behavior in children. Kind of like octopus moms, people with this disease often struggle with self-injury and aggression. Research on the dramatic end of life of many octopus moms may actually help us better understand other species, like humans.