These prehistoric rodents were social butterflies

A species of tiny mammals that lived amongst the dinosaurs might have led highly gregarious lives. 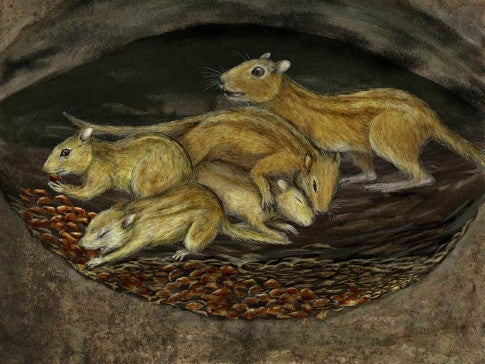 A newly identified small mammal from the Late Cretaceous epoch (about 75.5 million years ago) that resembles today’s rodent might be the earliest example of mammals exhibiting social behavior beyond coming together to mate or raise young. Misaki Ouchida
SHARE

Gatherings have been upended this year, as many of us meet over Zoom or in distanced and masked settings outdoors to avoid the risk of contributing to the spread of COVID-19. But one thing hasn’t changed: Humans are social animals, and we need each other. New research that analyzed the fossil record of Egg Mountain, a paleontology site in Montana, suggests that this gregarious trait may go farther back than scientists previously thought.

Published in Nature Ecology & Evolution this week, the work investigates a newly identified small mammal from the Late Cretaceous epoch (about 75.5 million years ago) that resembles today’s rodent. The researchers named the animal Filikomys primaevus (“youthful, friendly mouse”) because they believe the palm-sized creature lived in groups. The fossilized remains have been found in a number of sites on the mountain, and all of them were found in close proximity to others of the same species.

“They occur in these clusters of either two to five individuals with near-complete skeletons and skulls,” says study author Lucas N. Weaver, a Ph.D candidate in the University of Washington’s department of biology. This placement, along with the fact that multiple individuals of different ages and genders make up these clusters, suggests to Weaver and his colleagues that the animals likely lived together.

They also believe that the animals lived in burrows, much as modern chipmunks do, based on the fact that the skeletons, which were well-preserved, appear to have a strong front end—a feature known to be good for digging.

If true, this would be the earliest example of mammals exhibiting social behavior beyond coming together to mate or raise young. The majority of modern mammals—about 70 percent—aren’t social creatures, Weaver says, and the trait was previously believed to have evolved at the same time as the placental group of mammals, which includes humans and other apes.

Scientists used to believe that the mammals that lived prior to the KT extinction event, which wiped out the dinosaurs, were relatively unsophisticated creatures. In this framing, it took the dinos’ extinction to open up new spaces for mammals to evolve into. But studies in recent years have shown that might not be the case, Weaver says, and this paper is a contribution to that idea. “It’s adding to this growing narrative that Mesozoic mammals were actually very diverse,” he says.

Given the evidence, “The logical inference is that there is some overlapping intergenerational gathering of these animals,” says Jennifer E. Smith, a Mills College professor of biology who studies sociality in mammals. However, she cautions, without a time machine it’s impossible to know for sure what the social lives of the friendly mice of Egg Mountain actually looked like. The fossil record can only say so much about how animals behaved when they were alive.

Smith is particularly intrigued by the fact that these animals all seem to have died together or been placed together in the burrows after death. We know that mammals like humans, elephants, and even honeybees have ritualized ways of disposing of their dead, and that might be what’s happening with these fossils, she says.

This research is the newest finding out of the Egg Mountain site, which contains a wealth of information about the animals of the Cretaceous. But Weaver says more papers are on the way. Personally, he’s working on research to better understand the physiology of the multituberculates, the large and diverse group of mammals to which the friendly mice belong. He also anticipates more work on the evolution of the multituberculates. “Now that we have these skulls and complete dentition and skeletons, we can ask much more detailed questions about their evolutionary relationships.”