It took Ernő Rubik a full month to solve his own puzzle. Now nearly 50 years later, he’s sitting back and reflecting. 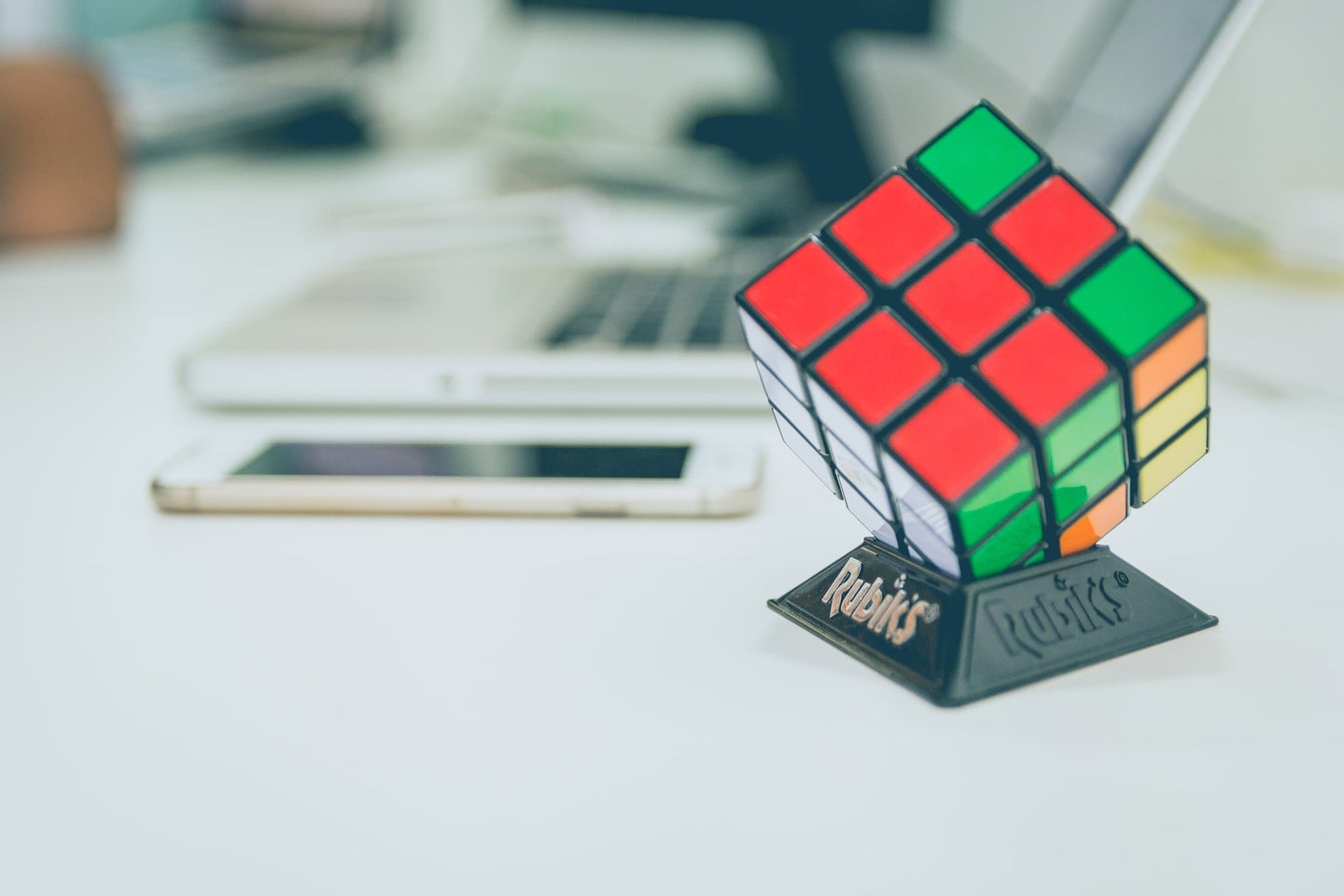 Hope Reese is a writer and editor in Budapest, Hungary. Her writing has appeared in the Atlantic, The Boston Globe, The Chicago Tribune, Playboy, Vox, and other publications. This story originally featured on Undark.

In the spring of 1974, a young Hungarian architect named Ernő Rubik became obsessed with finding a way to model three-dimensional movement to his students. After spending months tinkering with blocks of cubes—made from wood and paper, held by rubber bands, glue, and paper clips—he finally created something he called the “Bűvös kocka,” or Magic Cube.

The invention, eventually renamed the Rubik’s Cube, would become the most popular puzzle toy in the world, with more than 350 million sold as of 2018. The cube also inspired numerous artworks and films, and spawned a competitive sport called speedcubing that fills arenas with teenagers racing to complete the puzzle in the shortest amount of time.

But at the start, no one was more stunned about the runaway success of the cube than its creator, as he explains in his new book, Cubed: The Puzzle of Us All. The impact of the cube has been “much more interesting than the cube itself,” Rubik says in an interview with Undark. The book, he adds, is about trying to understand its popularity and “why people love it.”

At first glance, the cube seems deceptively simple, featuring nine colored squares on each side. In its starting state, each side has a uniform color—red, green, yellow, orange, blue, or white. To solve the puzzle, you must twist the cubes so that eventually each side returns to its original color: The challenge is the astounding number of potential variations—more than 43 quintillion of them.

To master the cube, you must learn a sequence of movements that can be performed in successive order—the subject of several best-selling books as well as online tutorials. And the evolution of the cube—from a three-by-three-by-three shape to larger four-by-four-by-four and five-by-five-by-five ones—offers different complicated mathematical principles of group theory.

Rubik initially believed the cube would appeal to those with science, math, or engineering backgrounds—and was shocked when “it found its way to people whom nobody would ever have thought might be attracted to it,” he writes.

In March 1981, the Cube landed on the cover of Scientific American, where Pulitzer-Prize winning scientist Douglas Hofstadter, author of Gödel, Escher, Bach (1979), called it “one of the most amazing things ever invented for teaching mathematical ideas.”

The cube struck Hofstadter as “paradoxical,” he says in a phone interview, since it can be used as a tool to teach group theory, or the symmetries of objects. “Any twist of any face (clockwise 90 degrees, counterclockwise 90 degrees, or 180 degrees) is a group element, and so are arbitrary sequences of such twists,” he later explained by email.

Sitting on the patio of his home in the hills of Budapest, Rubik, now 76, fiddled with a cube as he recalled its “discovery” and accidental success. (He prefers to use “discovered,” rather than “invented”—as if the existence of the object was somehow pre-ordained).

After creating the cube, he explained, he was faced with a second challenge: how to solve it. At the time, he had no idea if his cube could even be put back into place, let alone how fast—and it took him a full month to solve his own puzzle. It was fiendishly difficult “to find your way back, or to find your target—just to solve it as a combinatorical problem,” he says. “And I was without any background for that, because I was the first who tried.”

Rubik describes “Cubed,” as the product of a hermit who is “coming out of the shadows.” He refers to himself as a “concrete and intuitive thinker” and an amateur inventor, but like his invention, he defies categorization. His resume includes stints as a professor, architect, designer, editor and, now, writer. Rubik takes pride in his ability to self-teach, and bristles at the idea that those in authority are in the best position to impart knowledge.

His application to the Hungarian Patent Office in 1975 called the cube a “spatial logic toy.” At the time, Hungary was behind the Iron Curtain—it would remain a communist-controlled Eastern bloc state until 1989—and as Rubik writes, the country had “no particular affinity for toy production.”

Back then, puzzles were just a small slice of the overall toy market—you could only find them in souvenir and specialty shops—and thinking of a puzzle as a toy was a novel concept. It appeared in Hungarian toy stores in 1977, and was featured in international toy fairs, such as the 1979 Nuremburg Toy Fair—where it was spotted by Tom Kremer, a marketer who brought the concept to Ideal Toy Company in United States. By the early 1980s, the cube was featured in American TV commercials and advertising, and became the star of an animated series in 1983 called “Rubik, the Amazing Cube.”

The cube’s success appeared to be short-lived: In 1982, The New York Times declared it had “become passe,” and labeled it a “fad”, an assertion that would not stand the test of time. “The cube was far too eternal, far too amazing a structure, for people to lose interest in it,” Hofstadter says. And while interest in the cube dropped, it has recently picked up again—as director Sue Kim illustrates in her new documentary The Speed Cubers.

As a “cubing mom,” Kim began shuttling her son to cubing competitions—and became fascinated with the global popularity of the puzzle. Kim documents the way kids are mastering an analog tool using tools of the digital age—YouTube tutorials, articles, and more—and creating online communities around their love of the cube. “I actually think it’s found a new niche in popular culture because of its immersion within the digital landscape,” Kim says via video chat.

Hofstadter has heard of speedcubers, and thinks it’s fitting that the object has endured. “It’s absolutely deserved,” he says. “It’s a miraculous object, marvelous invention, a beautiful invention, a deep invention.”

For all of its appeal to mathematical skill and logic, the broad popularity of the cube may be rooted in the nearly limitless number of possible solutions. “That is one of its most mysterious qualities,” Rubik writes. “The end turns into new beginnings.”