Rats can’t puke, which is bad news for them and great news for us

We could use their unique talents to develop better chemo drugs. 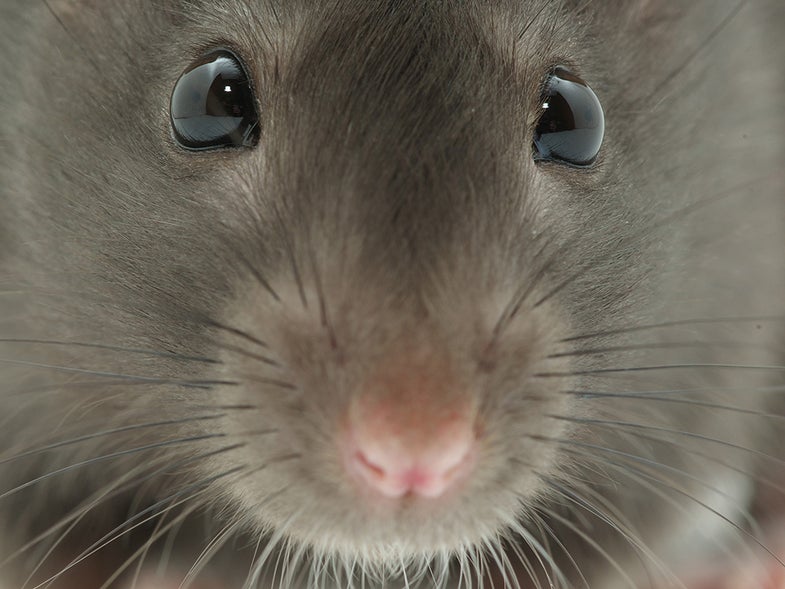 Consider, if you will, a repulsive case of food poisoning. You may try to hold it in, but at some point you’re gonna spew. But not every species is that lucky—and one day their inability to barf could help humans better tolerate life-saving treatments that make us nauseated, like chemotherapy. The unfortunate creatures in question are all rodents. That’s right: Rats can’t hurl. Don’t envy them their good fortune. Your gift of gag means you can expel gross or harmful things from your heaving guts. Rats can’t up-chuck things that could do them in, like poison. That’s obviously bad news for rodents. But for Linda Parker, a behavioral neuroscientist at the University of Guelph, it’s a blessing. Parker’s trying to get to the bottom of vomiting and nausea in human beings, and not-barfing rats are the key to her research. With the help of a horde of nauseous rodents, Parker and her colleagues have discovered several truths that could one day improve the lives of chemotherapy patients, as well as other humans who suffer from debilitating queasiness. Parker spends a lot of time working on gaping—the behavior rats exhibit when they feel sick to their stomachs. Much like humans, rats retch when they experience disgust, opening their mouth and jaw wide, and when they taste a flavor they associate with illness—indeed, any unfamiliar flavor at all—they exhibit such behavior for about 40 minutes.

That’s called conditioned disgust, and scientists have been studying it since the 1950s, when a psychologist named John Garcia realized rats exposed to radiation started acting weird when they tasted the same sweetened water they’d ingested before getting dosed. He figured out that the aversion was a learned, if unconscious, behavior, and it became known as the Garcia effect (side note: rat retching is definitely the best natural phenomenon you could possibly name after yourself).

Over the years, researchers narrowed this behavior down to nausea. Rats can’t tell researchers they’re nauseous, of course, but when rats ingest substances that make other animals barf, they gape instead. So it seems like a safe bet.

“Rats are a really good model for nausea,” says Parker. The very things that make them outliers, it turns out, make them great lab partners. Since they get nauseated when they taste any unfamiliar flavor—even if the substance won’t make them sick—scientists can induce gaping in rats without poisoning a load of them. (Parker thinks this overreaction to new flavors happens precisely because rats can’t puke, making it dangerous to eat anything unfamiliar.) And though rats’ brains get the same information that makes other animals vomit, Parker says, they react differently. “We get the same input, just not the output.”

This isn’t just good news for lab workers who are sick of cleaning up animal puke. It gives researchers like Parker a chance to study the nausea mechanism before it crosses over into vomiting—a brief, 45-minute window in which to study these uniquely pukeless bodies.

Parker has used this window wisely. In 2012, she and her team discovered the part of the brain that produces nausea with the help of the sick creatures. Previously, scientists had discovered that serotonin, the neurotransmitter thought to regulate mood in humans, helps trigger nausea. And Parker and team suspected that the insular cortex—located deep in the center of the brain in the idyllic-sounding Sylvian fissure—helped make it happen. It’s believed to be linked to the basic functions that make human bodies work: survival musts like controlling the beating of the heart or the infinite number of signals that tell the lungs to breathe. It’s also thought to control human reactions like sneezing and, you guessed it, the old technicolor yawn.

That insight is far from a gruesome thought experiment. Now that the team knows what part of the brain makes queasiness occur, they can work to find ways to treat it.

Parker has a hunch: She’s trying to figure out whether drugs that activate the body’s endocannabinoid system can prevent the serotonin elevation that seems to cause nausea. The body uses the system to keep hormones balanced, and if its name makes you think of green things, you’re on the right track. The chemicals found in cannabis bind there perfectly, as do weed-mimicking chemicals made naturally in the human brain. Parker compares the endocannabinoid system to the body’s brakes. It regulates energy and, critically, can reduce the body’s production of chemicals like serotonin.

So far, Parker and her team have shown that cannabidiolic acid, a compound found in raw cannabis, suppresses gaping in rats. So does cannabidiol, otherwise known as CBD. People with access to medical marijuana can get their hands on pot for nausea, but its ability to suppress nausea isn’t very well understood. With the help of microdialysis, a technique in which tiny amounts of fluid are extracted from gaping rats during their nausea sessions, Parker’s team is figuring out just how both substances affect serotonin production in the body. And since humans and rats share most of their brain structures with humans, Parker thinks her research can be applied to nauseous people, too.

That doesn’t necessarily mean that pot is the key to making you feel like you won’t puke, however. “There are over 100 compounds in the plant,” says Parker, “I mean, we have no idea. Only about 10 or 15 of these compounds have been studied, and most of them very little.” Researchers like Parker have only glanced at the tip of the tip of that particular green iceberg—but perhaps one day it will help disgusted rats and humans who struggle to keep down critical drugs achieve a better quality of life.