There’s apparently a giant void in the Great Pyramid. Here’s why we don’t know what’s in there. 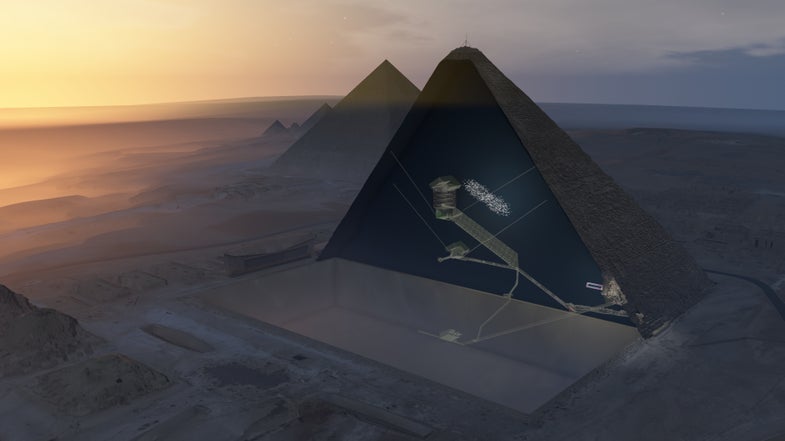 In the upper reaches of Earth’s atmosphere, a rain of high-energy radiation slams into the thin air. The impact creates a second shower of charged subatomic particles, like muons, which fall towards Earth, and then fall into it. They drift down through clouds and then through stone, with most halting in the sculpted, lithified skeletons of long-dead sea creatures. Others press on, passing again through air, through rock once more, and then through a photographic film.

Captured is a see-through close-up of one of the greatest wonders of the world, the 456-feet-tall Great Pyramid or Pyramid of Khufu, built around 4545 years ago. In a study published in Nature this week, a consortium of researchers announced that by placing specialized photographic films, called nuclear emulsion films, in the lower chambers of the pyramid they discovered a previously unknown void in the structure’s upper reaches. They hoped that muons falling from the sky would deliver an x-ray-esque image of the pyramid’s interior. Luckily, they were right.

In addition to seeing the already-explored King’s Chamber, and confirming an earlier observation, they also saw a large, nearly 100-meter-long void in the pyramid, isolated from the previously investigated chambers. Its huge size is intriguing to researchers who would like to know more about how the pyramids were constructed. Only fragments of evidence of building techniques remain.

It’s unclear what the void is, and the researchers are careful not to call it a room or a chamber. As Egyptologist Mark Lehner told multiple outlets including the New York Times, finding holes in a pyramid isn’t exactly rare. “The great pyramid of Khufu is more Swiss cheese than cheddar,” Lehner said.

The nature, purpose, and contents of this gap remains a mystery. The rough dimensions of the void are known, but the exact location and shape is still fuzzy. There could even be a cluster of separate spaces.

It’s unlikely that the hole contains hidden treasure—thousands of years of determined grave robbers and excavations have uncovered most things of monetary value, especially in giant monuments like the Great Pyramid, which was the tallest structure in the world for millennia. But there’s still a lot we could glean about how the pyramid was constructed by analyzing the placement of the stones inside the massive structure.

Unfortunately, crawling in like Indiana Jones is not an option.

Gone are the days when an archeologist would go into a site explosively, dynamite blasting. In 1837, an English excavation of the pyramids involved blowing up parts of the structures. Even when not using explosives, digging up a site is an inherently destructive process, and over the years, archeologists have learned new ways to get information—learning just as much from the pollen grains, ash or soil that coat an artifact as from an artifact itself. The context in which an object is found is what makes that item precious to science, not whether or not it’s carved from alabaster or cast in gold. That’s why modern archaeologists meticulously document everything when they’re working on a site.

In an effort to preserve that data for the future—and to preserve data that we don’t even know we’re looking for yet—archaeologists are increasingly using non-destructive techniques (like muon imaging) to see inside structures or underground without actually breaking open any tombs or structures. That becomes even more fraught with a highly visible structure like the Great Pyramid, which has already withstood the ravages of time, and had bits and pieces torn off of it over the years. Any kind of excavation at this important heritage site—which also brings valuable tourism dollars into the country—would require intense consideration and, of course, permission.

There are some plans to peek inside though, using more non-invasive techniques that could give us a better idea of the dimensions of the space, and using some more invasive techniques too. One collaborator on the project told the BBC that they were exploring the option of drilling a hole a little over an inch across into the pyramid and sending in a flying robot to look around.

Whatever way people eventually choose to peer into the void; whether with more scans, or with flying robots, it won’t be quite as quick and easy as just digging through the side. But preserving archaeological evidence—and the structure itself—for future generations is well worth the price of patience.