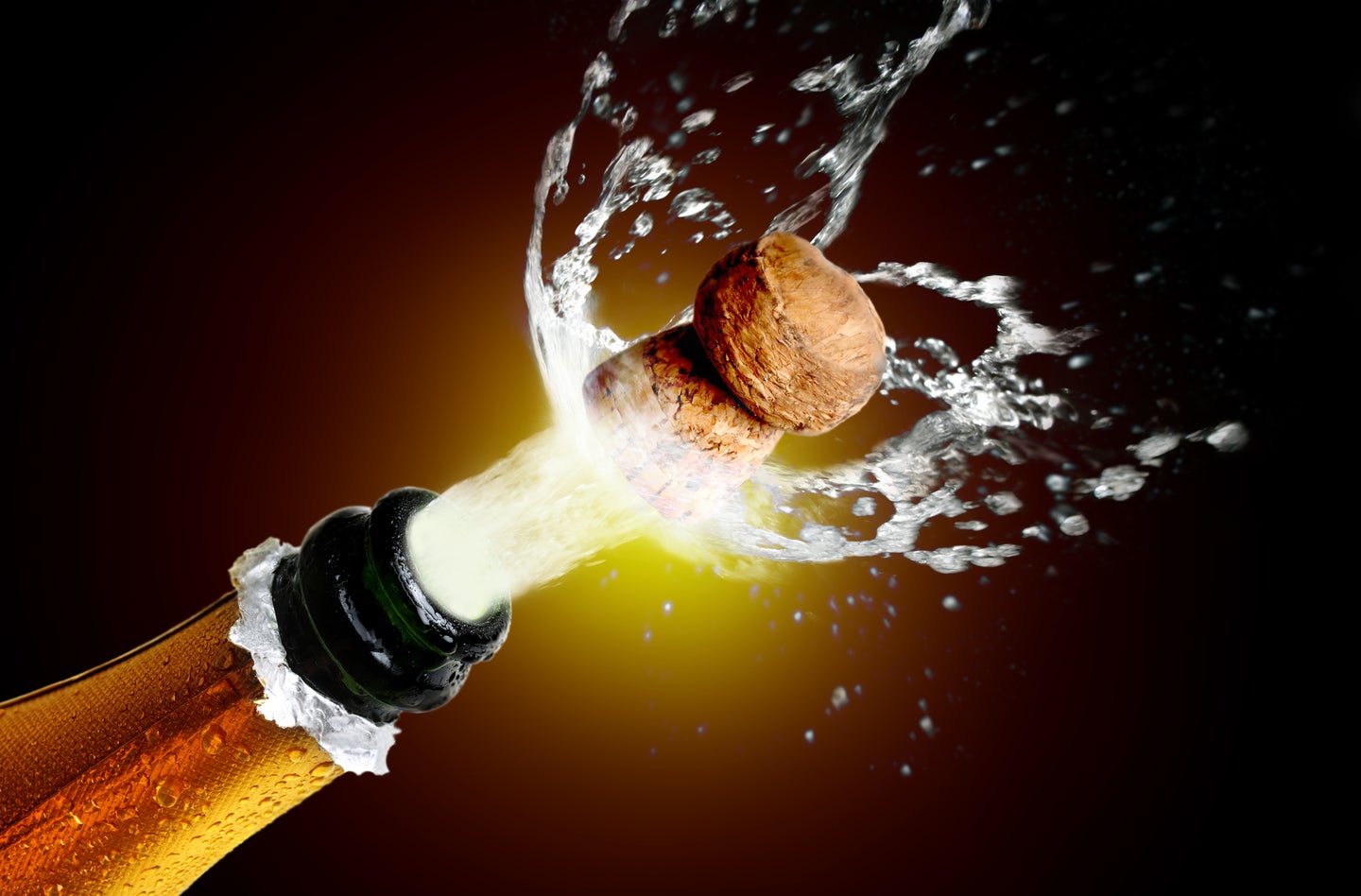 Every time you pop a champagne bottle, you're launching a small, but powerful weapon. Deposit Photos
SHARE

Since Europeans started drinking it during the Renaissance, champagne (or sparkling wine, if it’s not made from the region in northern France) has always come with a pop. The very first bottles were probably accidents: wine that had bubbled up after fermenting for too long. Some built up so much pressure, they’d explode.

But once champagne was tamed by Dom Pérignon and other wine connoisseurs, it became all about the bubbles. The drink really took off during the Roaring Twenties, when the wealthy stealthily filled their coupe glasses from gilded bottles of Ayala and Perrier. Today, people are back to drinking from flutes, which better show off the dance of the carbon molecules.

Of course, part of the joy of imbibing champagne lies in the uncorking itself. The tension of teasing apart the wire cage. The pop and the fountain of fizzy booze that follows. The relieved laughter (even though you’ve done this hundreds of times now). All that drama comes from a millisecond-long reaction triggered by supersonic flow.

In a study published in the journal Physics of Fluid Dynamics last month, engineers from France and India modeled the shockwaves of gas after champagne is popped. Researchers had previously used high-speed cameras to understand how fast the jet of carbon dioxide and liquid moves once a bottle is uncorked. But this group dug a little deeper to break down the champagne’s “interaction with the cork stopper, the eminently unsteady character of the flow escaping from the bottle, and the continuous change of the geometry” of the matter, as they wrote in the paper.

What they learned is that the ballistics of bubbly are powerful—and maybe even dangerous. When the cork on a champagne bottle is wiggled out, the flow seeps out slowly without forming a strong pattern. But in that flash of a second when the cork is yanked up, the flow bursts through, hitting supersonic speeds at the top of the bottleneck. As the gas and pressure rush out, they dissipate in crown-shaped shockwaves (or Mach diamonds), similar to the ones that come off rockets during launch. The final shockwaves look more muted and detached, and are likely the ripple effects of the CO2 and water vapor’s interactions with the cork.

The findings could prove useful to the development of electronics, submersibles, and even military-grade weapons. “We hope our simulations will offer some interesting leads to researchers, and they might consider the typical bottle of champagne as a mini-laboratory,” study co-author Robert Georges from the Institut de Physique de Rennes told phys.org. Next he said his team might explore how different temperatures and bottle shapes affect the shockwaves.

No word yet on how sabering changes this supersonic sequence. But please remember to always aim the champagne bottle away from yourself and others: That’s basically a miniature missile you’re setting off.