This pretty blue fog only happens in warm champagne

And illustrates some fundamentals of physics. 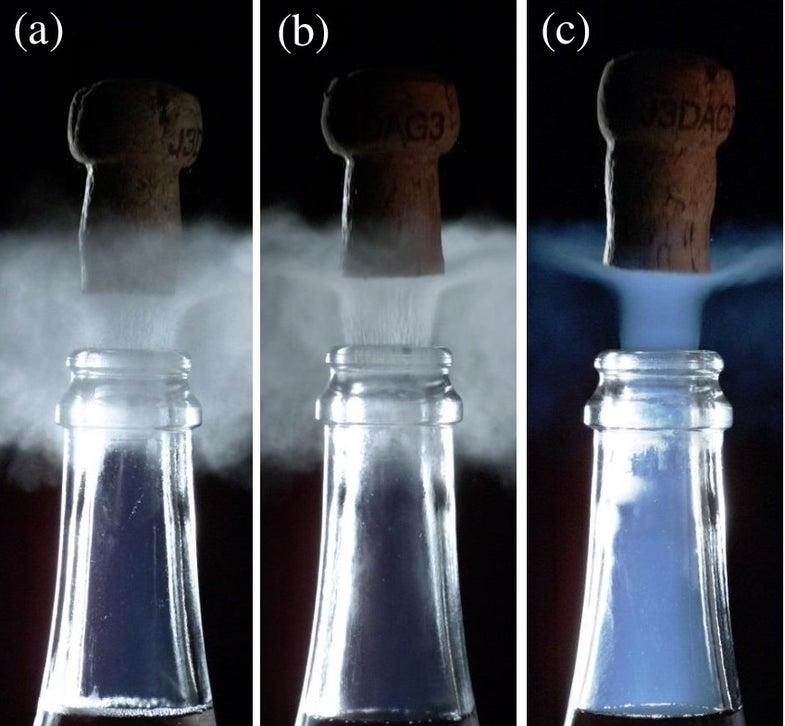 Not many people are into room-temperature champagne. Most of us like our bubbly chilled, but if we weren’t so invested in refrigeration, we might have seen the blue fog sooner. Oops.

Thankfully, there’s an entire field of research in France devoted to studying alcoholic effervescence, because of course there is. The physicists are even based in the Champagne region, at the University of Reims Champagne Ardenne. They didn’t set out to find blue fog, though it makes for some spectacular imagery in Scientific Reports, where they recently published their results. They stumbled upon it, like a sapphire in a coal mine—a sapphire that bursts into life for a fraction of a second, then disappears in a puff of (almost) literal smoke.

But to understand this mysterious blue glow inside the top of warm champagne, you first have to understand what the physicists were trying to figure out in the first place.

When the cork comes out of a champagne bottle, you can often see a little puff of white gas rushing out. Most people have probably never bothered to think about what that tiny cloud is, but if asked to think on it a moment, they might tell you that it’s carbon dioxide flowing out of the bottle. After all, champagne’s carbonation comes from dissolving the gas at high pressure, hence the satisfying POP when the top comes off. It follows that the cold liquid would give off some vapor as it effervesces.

There’s just one problem: the fog doesn’t originate inside the bottle neck. It moves from the outside, in. That wouldn’t be apparent to a real-time viewer, though. For one thing, champagne bottles tend to be a dark green color, which isn’t great for seeing vapor details. For another, it all happens way too fast for the human eye to see. You have to look through a high-speed camera.

At those frame rates you can watch the cloud move into the bottle. The physicists reasoned that this must be rapidly cooling water vapor in the air, condensed by the exiting carbon dioxide. That gas rushing out is cold because it’s been chilled, but its temperature is also dropping for another, more polysyllabic reason: adiabatic cooling.

Adiabatic cooling is basically just the idea that as a gas increases in volume, it decreases in temperature (and vice versa). So when the highly compressed gas inside a champagne bottle suddenly gets to expand into the surrounding atmosphere, it rapidly cools. And in this case, it gets cold enough to condense a little water vapor. This is actually the same principle by which air conditioning and refrigeration works—they’re both cycles of a coolant that’s allowed to expand and contract as necessary to either add or remove heat from a space. The actual process is a bit more complex, but the scientific mechanism is identical.

When the champagne was chilled, they consistently saw that whitish vapor rush from the outside to the inside. But when it was at 68 degrees Fahrenheit, close to room temperature, they saw the blue fog start inside and move outward. And that meant that it couldn’t be water vapor. The gas inside the bottle is mostly carbon dioxide gas, so water shouldn’t be condensing in there.

It turns out that the blue fog is actually the result of frozen carbon dioxide combining with icy clusters inside the bottle. That might sound odd, given that the champagne is rather warm. It all comes back to that adiabatic cooling principle. When you start with cold bubbly, the gas inside the bottle isn’t at very high pressure, and therefore doesn’t undergo much expansion or much adiabatic cooling. Because the lukewarm champagne starts out at high pressure, it gets to expand much more, and therefore gets cooled much more. In the end, the gas from the warm bottles actually ends up colder than the gas from the chilly ones. And it gets cold enough to temporarily freeze carbon dioxide and water.

And as for why it’s blue? Well, for the same reason that the sky is blue, silly! Rayleigh scattering happens when light hits molecules much smaller than its wavelength, spreading short wavelengths the most—like blue. Sidenote: it also scatters plenty of violet light, but the photoreceptors in our eyes can’t pick up that wavelength very well, so we just get a tinge of a violet-esque hue that makes the blue color seem paler. Anyway, the briefly frozen gases inside champagne have the same Rayleigh scattering effect, and therefore appear blue.

So next time you pop open a bottle of bubbly, remember the blue fog. Remember—and tell your friends.