NASCAR may be the fastest road to learning about physics

An expert explains the science. 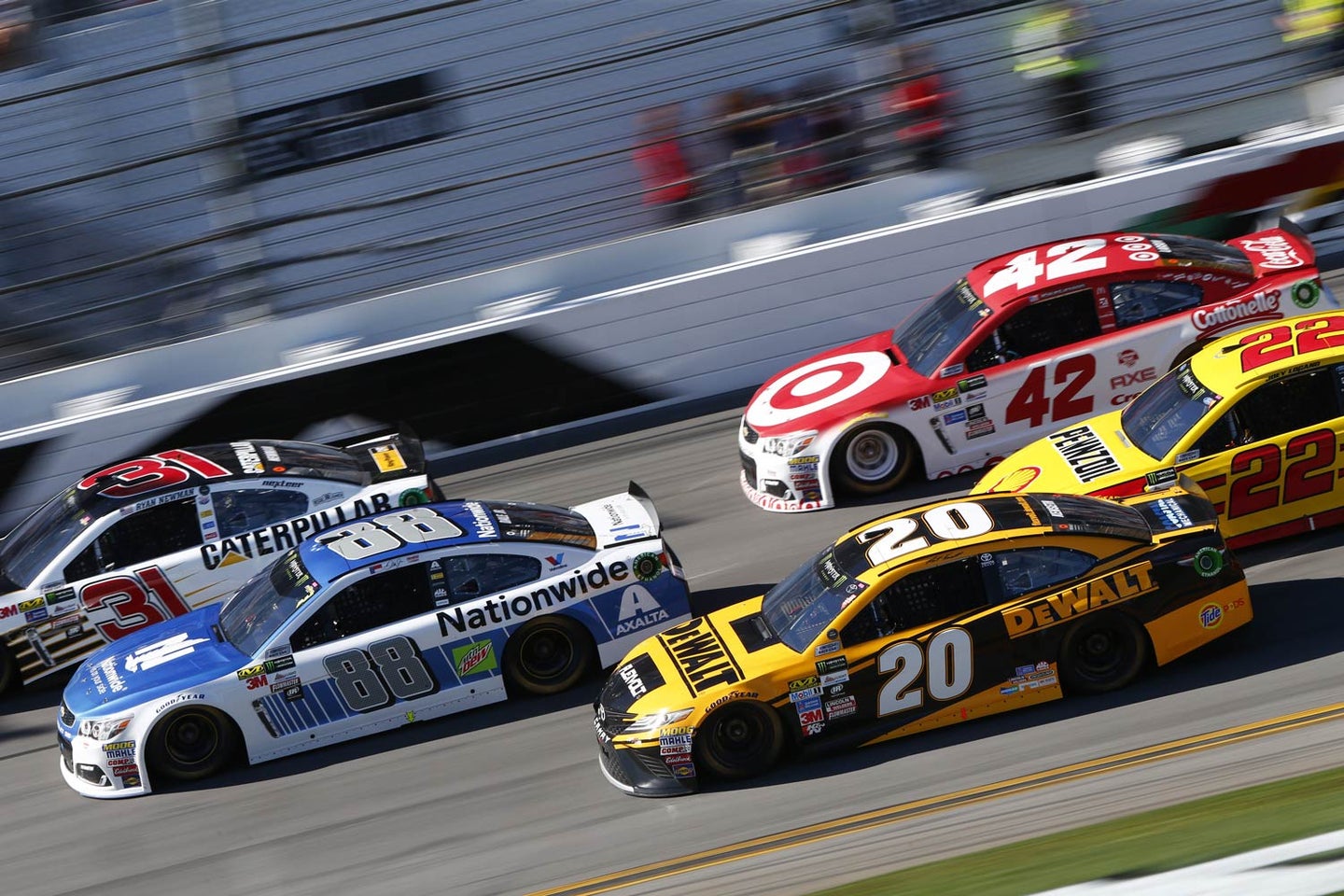 There’s just something thrilling about traveling at high speeds. Throughout history people have always pushed themselves to go faster, whether on foot, on horseback, on a boat, or on a bicycle.

Nearly every weekend, today’s speed lovers can live vicariously by watching their favorite NASCAR drivers race around the track at death-defying speeds.

Maybe it’s the excitement in the crowd or maybe it’s the constant threat of danger that draws people to the sport. Or maybe its the feats of science and engineering that pull some spectators in. As a physicist, I love seeing all the physics principles on display during a NASCAR race.

NASCAR drivers travel at extremely high speeds, more than 200 miles per hour. They accelerate so quickly that it takes them only around 3 to 3.5 seconds to go from zero to 60 mph. During this acceleration, the car must exert an average of 2,600 lbs of horizontal force against the track. This is comparable to the bite force of a large American crocodile or what it would take to lift a full-grown buffalo.

While NASCAR drivers are moving at incredibly fast speeds compared to the crowds in the stands, their speeds are small compared to what Einstein had in mind—like how fast light can travel, 670 million mph. The effect of relativity at the track is small, but it does exist.

So how are drivers able to obtain these speeds?

As a car enters a turn, it naturally wants to continue in the direction it was originally going. To change direction to follow the curve of the oval-shaped track, a force must be applied.

So for drivers, it’s a balancing act—they want to keep the pedal to the metal, but they can’t go so fast on a curve that their speed overpowers the maneuvering ability provided by friction. Go too quickly and the friction may not be enough to prevent the car from continuing in its original direction and sliding straight into the wall. Slow down too much and you fall behind the competition.

The way the track is designed can help out here. The turns are banked, meaning they are higher on the outside of the track and lower toward the center. Part of the force of the road pushing up on the car—what physicists call the normal force—assists the frictional force of the tires and helps the car make it around the turn.

Banking in the turns at some of the fastest race tracks is comparable to the steepness of a playground slide. Banking at Richmond International Raceway allows cars to go approximately 1.3 times faster than they could without banking. Larger curves and higher banking, like those seen at Daytona and Talladega, allow the drivers to maintain a higher speed as they round those corners.

Power is a measure of energy converted from one form to another in a set amount of time. In stock car racing, this conversion is from the chemical energy stored in gasoline to the kinetic energy of motion.

A NASCAR engine produces around 750 [horsepower)(https://www.popsci.com/what-is-horsepower/) (560 kW), which exceeds a similar model street car that tops out around 300 horsepower. During a race, the power conversion of a NASCAR engine is about 500 times the power usage of the typical American household during the same period of time.

The cars’ power comes from burning gas as the engine rotates. The rotation of a NASCAR engine is 3.5 times faster than a standard street car and much more efficient, allowing it to combust more quickly and produce more power.

With the high speed and power of stock cars come the risks of dangerous collisions. Some of the hardest crashes in NASCAR register around 80 G’s—that is, 80 times the acceleration of gravity that holds you to the planet. For perspective, amusement park rides top out around 6 G’s.

Safety elements try to extend the time, distance, and area over which any collision takes place in an effort to lower these high forces. The principle is similar to the way gradually coming to a stop is less jarring than slamming on the brakes or the way a bed of nails spreads the weight of your body over a large area versus lying on a single nail.

SAFER barriers along the outside wall of the race track are made to crumple and dissipate a crash’s force over a large area. The front end of the car itself is also made to crumple, which extends the time of impact.

Carbon fiber seats in the car absorb more impact energy compared to aluminum seats. They stabilize the driver by wrapping around the rib cage and shoulders, and spread the impact force over a larger area.

So next time you head to the track or tune in on TV, ponder some of the physics of NASCAR, as well as the contributions of scientists and engineers working behind the scenes to improve the speed, power, and safety of the sport.

Christine Helms is an Assistant Professor of Physics, University of Richmond. This article was originally featured on The Conversation.