Physicists want to create energy like stars do. These two ways are their best shot.

Both approaches to nuclear fusion share a common goal—harnessing the power of a sun on Earth. 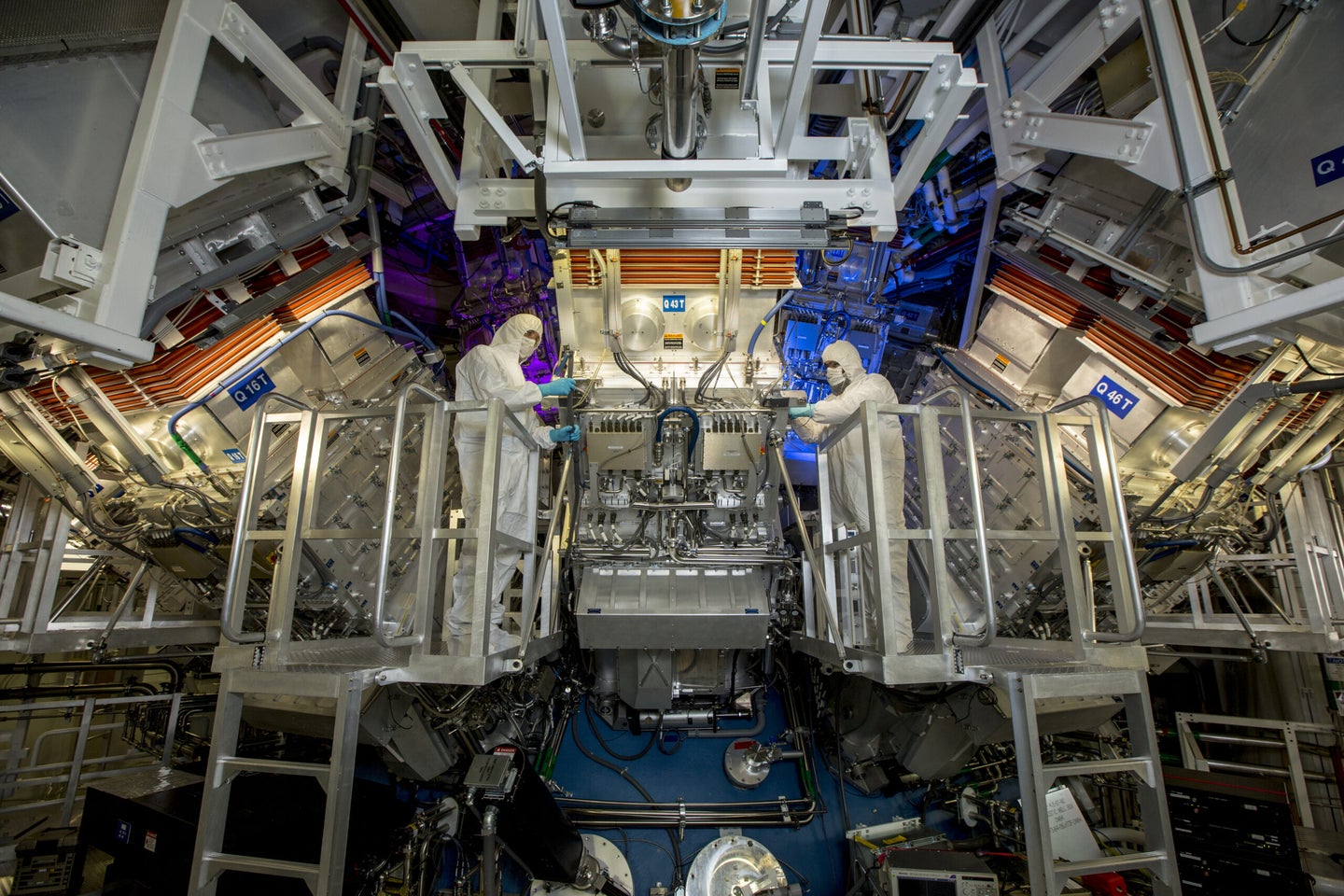 Last week, politicians and leaders met in Glasgow for COP26 to iron out policies that might alleviate the climate crisis. Because the need for energy is fueling that crisis, it might be tempting to look at the burning sun and wonder whether we could do what it does—that is, nuclear fusion.

Scientists have been trying for decades to achieve fusion. Actually doing so, though, requires overcoming an immense number of logistical challenges. Although fusion is a science that moves slowly, scientists are inching ever closer to achieving the dream.

They’re splitting their efforts between two types of fusion reactors. One approach goes big and tries to trigger fusion in a room-size chamber. The other goes small and tries to do the same in a pin-size pellet. But both, ultimately, try to mimic what happens in the sun.

Our star produces its immense heat and blinding light by fusing hydrogen atoms, which crunch together to create helium and an incredible amount of energy. That’s what fusion researchers ultimately want to do: If we could create even a pale shadow of a star on Earth, that would open the door to incredible amounts of clean energy.

These are the two most promising approaches.

The sun can fuse hydrogen atoms with ease because of the infernal conditions in its center. At temperatures of tens of millions of degrees, atoms overcome the electromagnetic forces naturally keeping them apart. They fuse. That reaction produces no greenhouse gases.

At such temperatures, the atoms are so hot that they lose their electrons and become a scalding soup of electrically charged particles, called plasma. By applying electric and magnetic fields, scientists can manipulate and stir this soup.

Creating plasma on Earth is doable. But that’s only the first step. Next, physicists must compress the plasma into sufficiently high densities. One way to do this is to put the plasma in a harsh magnetic cage. That’s called magnetic confinement fusion.

The best-known vessel for this method is the tokamak: a doughnut-shaped chamber typically about as large as a medium-size room. The walls of the chamber are home to powerful magnets, which help corral the plasma until it reaches the densities high enough for fusion to launch.

Fusion’s long-sought goal is a threshold called “ignition,” when the reactor puts out more energy than required to start it—a necessary benchmark to make a fusion power plant viable. But even though magnetic confinement fusion has been around since the 1950s, so far, no such reactor has come close to that mark.

But that date, scientists hope, may be in sight. Under construction, nestled in the hills of the south of France, is the largest and most powerful tokamak the world has ever seen: the International Thermonuclear Experimental Reactor, or ITER. Its tokamak will be ten times roomier than today’s largest. Having been in the works for more than a decade, ITER hopes to begin operations in 2025. It’s been called the most expensive science experiment ever.

Partway around the world from France, in August 2021, another sort of reaction was underway. At the National Ignition Facility (NIF) at Lawrence Livermore National Laboratory in California, scientists announced they’d conducted fusion at an efficiency so high it nearly reached ignition.

There is no tokamak in NIF’s successful experiment. Instead, NIF uses a type of reaction called inertial confinement fusion. This relies on taking a tiny pellet of hydrogen fuel, typically the size of a pinhead, and jolting it with powerful shockwaves. As those shockwaves wash over the pellet, they compress and broil the hydrogen inside to pressures and temperatures high enough for fusion to launch.

Physicists can create those shockwaves in multiple ways, but nearly all of them rely on aiming high-energy lasers at the pellet. Some facilities directly blast the pellet with those lasers. NIF, instead, converts the laser’s energy into X-rays, which in turn strike the pellet.

That takes more energy, but it also makes the setup less delicate and more manageable by giving scientists just a little more leeway to work with. “The process of getting one of these things to compress…is very finicky. Everything has to be really, extremely precise,” says Doug Larson, NIF director.

NIF and its counterparts can create immense pressures, more than is possible in a tokamak—but the pressures in a tokamak last much longer.

“On NIF, we can create pressures up to something like a hundred billion atmospheres—really, really, crazy extreme pressures—but these things exist in our target chamber for trillionths of a second,” says Larson.

NIF is the only inertial confinement fusion facility of its size, although other such facilities, such as the Laser Mégajoule in Bordeaux, France, and the proposed Shenguang IV in China, may one day match it.

A sunnier future for fusion?

Physicists say it’s an exciting time in the world of fusion. “Over the past year, a lot of understanding has kind of come together in a way that the progress has really accelerated” at NIF, says Larson.

Fusion reactors offer the promise of near-unlimited power–but they are far from an immediate remedy to the climate crisis. The August experiment at NIF relied on a laser that can pulse every few hours, for instance. But for an inertial confinement fusion power plant to be commercially viable, says Larson, that laser needs to fire every few seconds. NIF plans to upgrade that laser.

As for ITER, the giant tokamak under construction in France, it’s only an intermediate step toward making fusion power feasible. Its builders hope the knowledge from ITER will improve the next generation fusion reactors, called the Demonstration Fusion Power Plant, or DEMO. DEMO, they hope, might be what brings fusion to the people. Those power plants won’t start construction until the 2030s.