The physics of throwing a perfect baseball pitch

Physicists and Trevor Bauer on how to invent a whole new slider. 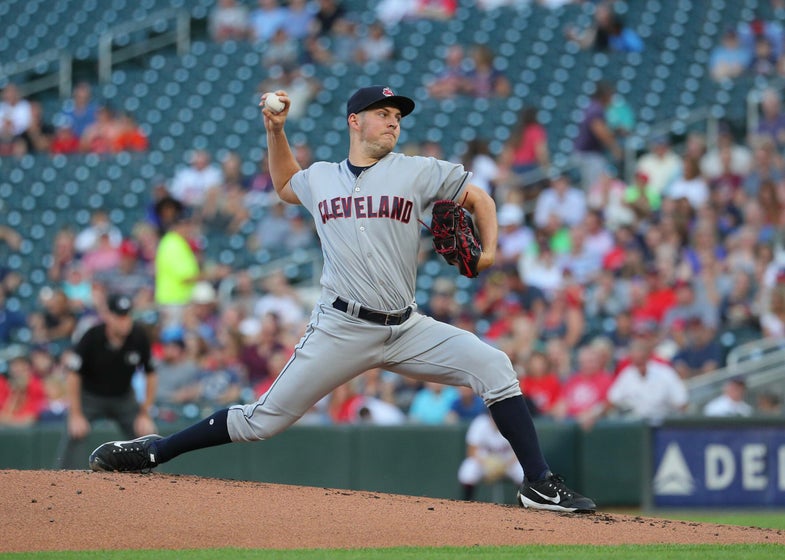 Standing on the mound, a major league baseball pitcher has 60 feet and 6 inches of air to get each pitch to sizzle before it crosses the plate. But it’s their arsenal of throws that separates a good pitcher from a great one. Two-fingered fastball, four-fingered fastball, slider, curve, cutter, knuckleball—each option spins differently to achieve a unique motion.

“There are so many different things in baseball that lend itself to science because it’s not so much of a physical game as it is a technical game,” says Trevor Bauer, starting pitcher for the Cleveland Indians. Bauer is unusual for his knowledge of the physics of baseball. He studied engineering at UCLA during college, but cites his dad, a chemical engineer who taught him the scientific method, for his love of science.

In order to get baseballs to drop and curve across the plate, pitchers manipulate their grip and timing. While most pitchers don’t think about the physics of their pitches, Bauer says, it’s the way the air moves around the rotating baseball that gets those strikeouts. While others are implementing complex fluid dynamics unintentionally, Bauer studies it to figure out how to add new pitches to his quiver. During the break between the 2017 and 2018 seasons, Bauer was able to scientifically develop a slider he never had before. And to do so, he had to understand what really goes into a pitch.

“There are a lot of tools that the pitcher has at his disposal,” says Alan Nathan, a retired physicist at the University of Illinois who studies the physics of baseball. “I think the primary things that play a role are the speed, the spin rate, and the spin axis.”

Speed and rate of spin influence how much a ball moves in the air. As a baseball rotates, air moves around it and is deflected off one side of the sphere. The axis it spins around and the rate of that spin determines where the air is released and with how much force.

A ball that spins counterclockwise (to the left) on a vertical axis—like a disco ball—will move towards the left, because the rotation pushes air off towards the right. This flow creates a low-pressure zone on the left side, and the ball moves towards the area of vacuum, says Bauer. That force—the Magnus force—creates the bending effect. Pitches like a breaking ball take full advantage of the Magnus force to arc the baseball’s path as it travels towards the batter.

Not all pitches are trying to bend so dramatically, though. Four-seam fastballs implement the Magnus force to fight gravity instead.

“To throw a ball as fast as you can, you want your fingers and your hand behind the ball when you release it,” says Eric Goff, professor of physics at the University of Lynchburg. “When you do, your fingers are going to roll on the back of the ball and that will put backspin on it.” This upward rotation causes the Magnus force to exert the equivalent of about a quarter of the weight of the ball, Goff says. While it doesn’t prevent gravity from acting on the ball, it gives these pitches a little more lift or “hop” in baseball parlance.

The breaking ball is where the drama of the Magnus force really comes into effect. A breaking ball appears to come in level with the top of the strike zone (roughly the middle of the batter’s abdomen) and drops down to a batter’s knees as it crosses the plate. “There are some very neat illusions that are associated with a breaking ball,” says Goff. “It will look like it’s just straight on a string and at the very last second it drops.”

Gravity is the key here. “Three quarters of the ball’s drop happens in that last half of the flight to the plate,” Goff says. A pitcher can put topspin on a ball by letting their fingers sit down the front of the ball, and that topspin adds to gravity and enhances the drop of the pitch.

Sometimes, though, it can be a lack of flow that makes a pitch valuable.

Airflow across the baseball can move in smooth sheets called laminar flow, or turbulent pockets. The difference in flow is created by how the seams turn into the air and impact how the ball will move, says Bauer.

Pockets of turbulent air are what create the knuckleball. “A really well thrown knuckleball in baseball might tumble about a half to a full turn on the way to the plate,” Goff says. This lack of spin removes the Magnus force from effect, and leaves the combination of laminar and turbulent flow as the seams of the baseball catch the air. This creates a pitch that bobs and weaves as small changes cause turbulent flow in different places around the ball, pulling it through the air unpredictably.

“The erratic movement on a knuckleball is an example of what physicists call a chaotic function,” Nathan says. “A small little change in those release conditions could make a really big change in what happens to the ball.” Accidentally putting spin on one creates a big slow pitch for a hitter. Throwing one is like squeezing a watermelon seed out of your fingers in an attempt to put as little spin on the ball as possible, says Goff.

By creating pockets of turbulent air in one place on the ball, you can add more movement to a ball that’s already using the Magnus force, Bauer says. When the locations of the seams create a non-uniform rough patch on the ball, the turbulent air pulls the ball in that direction. “The rough spot is like a flat tire on a car,” says Bauer. “The right side gets more turbulence and the ball will turn towards the right.” You can see this in action in Bauer’s sinker, which uses the combination to drop and cut right due to the placement of the seams.

Using an understanding of Magnus force and the impact of air flow, in the 2018 offseason Bauer decided he could add a slider to his repertoire that had no vertical movement due to spin (just gravity), with seven to ten inches of horizontal movement. A slider is typically in between a fastball and a curveball in both speed and amount of motion. “It’s hard to talk about pitch classifications anymore because they get lumped into these categories that don’t actually have much meaning,” Bauer says. “Now you can quantify how a pitch is thrown actually moves and pitch classification has become somewhat meaningless because it depends on what the person himself calls it.” However you define the slider, Bauer looked at his arsenal and decided it would be more dangerous with a pitch with precisely this movement.

He started by studying the gyroscopic spin of a football, which has no horizontal or vertical movement. “I needed to have a pitch that was perfectly gyroscopic but the axis was tilted up towards vertical as much as possible,” Bauer says. “The more I could tilt that axis up, the more lateral movement I was going to get.” More tilt means more Magnus force to push the ball sideways. Using pushpins to identify the axis of rotation, Bauer and his dad spent six hours working through how Bauer would hold the ball to get laminar flow across the ball that would add to the sideways movement of the Magnus force.

Get you some spin axis and fluid dynamics in your life pic.twitter.com/fq8FqFkd9w

Once he had a grip, Bauer looked to video and images of other pitchers with a similar pitch, like Stephen Strasburg of the Washington Nationals and Marcus Stroman of the Toronto Blue Jays. “It turns out that the grips we had designed, completely blind, just based on physics and an understanding of the principles, turned out to be the exact grip that Strasburg and Stroman use,” Bauer says. “It’s just, it took my dad and I six hours to develop that grip instead of perhaps 20 years of experimentation and fiddling.”

It took another six hours of throwing and fiddling with the grip for Bauer to throw the slider he wanted, along with a changeup he designed in a similar way. “But then I had proof that I could actually do that, out of my arm and out of my delivery,” Bauer says. He brought the slider into spring training with great results. “It was super encouraging. And then I got into season and about the second week of season, I completely lost the feel for it.”

Bauer says losing the feel for a new pitch is typical. “The true test for whether you own the pitch or not is if once it disappears, because it’s going to disappear,” Bauer says. “Once it disappears do you know how to get it back.”

Pitchers need a wide variety of movement in their arsenal because pitching is all about disrupting the batter’s timing. There is about a tenth of a second after the ball is released before a batter has to decide to swing, he says. “By changing the speed of the pitches, the batter’s timing is messed up,” Goff says. “Changing the location of the pitches, the batter starts to guess.” The more variety, the more swinging strikes a pitcher gets, which is what Bauer was hoping he could get with his slider.

For the first month of the season Bauer fought to get the slider back, while pitching his other mix in games. He studied slow motion film of his teammates with a similar slider—Corey Kluber, Mike Clevinger, as well as Stroman—and compared their grips to his. “I saw that my fingers were getting too much to the front of the ball,” Bauer says, “so I was getting more vertical movement than I wanted, and not enough horizontal movement.”

The issue was that the ball was staying too long in his hand. “You can manipulate the grip so the ball comes out slightly later or slightly earlier,” Bauer says, so in order to get the slider to release two milliseconds earlier, Bauer tucked his thumb under the ball instead of its usual location. Now his slider consistently has seven to ten inches of horizontal movement.

“That’s the power of understanding the principles and what’s actually going on at that critical moment,” Bauer says. “Because I understand and did all the studying and designing of it, it makes it very easy to make adjustments because you know all the different control parameters.”

Bauer is unusual in Major League Baseball for knowing the physics behind his pitches, Nathan says. Most players don’t think about it. Bauer thinks there’s a good reason for that; Analyzing the physics of the game makes it harder to perform if you don’t know how to switch back into a performance mindset. He says he’s lucky that he had enough time in the minors to figure out how to do that, but most players aren’t given that luxury. And he doesn’t think aspiring pitchers should try to emulate his methods. He actually suggests young players should rely on good coaches instead of investigating the physics.

But while Bauer is pitching in the major leagues, the physics at work extend beyond the ballpark. “The science is fascinating because it doesn’t just apply to baseball,” says Goff, “it applies to about anything moving through the air.”