But there are still puzzles left to solve. 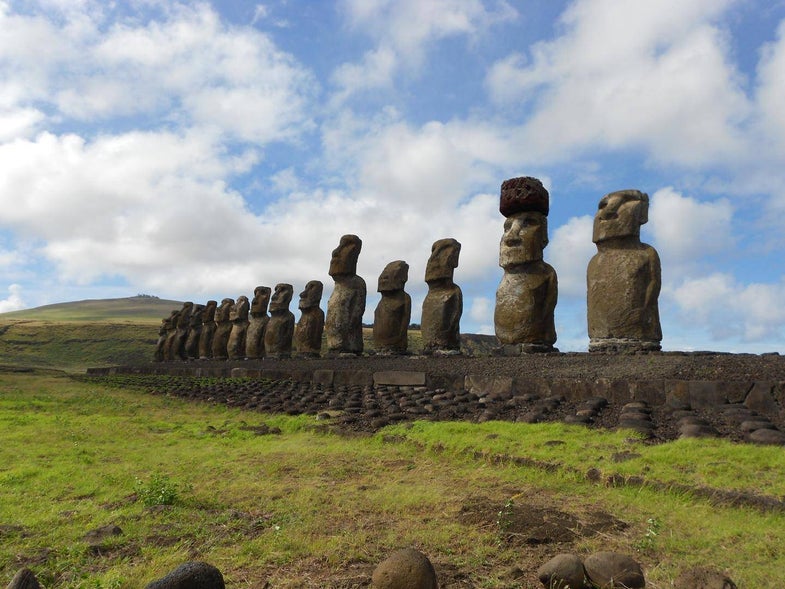 Almost a thousand stone figures—each weighing tons—dot Easter Island, known also as Rapa Nui. These moai have puzzled generations of Western anthropologists over the past two centuries: how were they created, and how were they moved from the places where stone was quarried to the points on the island where they’re found today?

How, for that matter, did they end up wearing six foot-wide hats made out of different kinds of stone from the statues themselves?

A new study from a team of American researchers, some who have been studying the moai for almost two decades, offers an answer to this last baffling question. The physicists and anthropologists used three-dimensional models of the hats, which are called pukao, and the existing anthropological record, which includes hats and statues found around the island in modern times. Based on their modeling and the existing evidence, they demonstrated that the hats were affixed before the statues were completed and situated, while they were tilted forward.

There are many theories about how and why the Easter Islanders built and transported their statues, says study author Carl Lipo of Binghamton University, but they’re just that—theories. What sets this team’s approach apart, he says, is that they looked at the statues and hats themselves for evidence. In previous research, Lipo and another study author found that people transported the statues by “walking” them from the quarry—think moving a heavy wardrobe or dresser. In the case of the hats, they looked for, in the words of the study, “pukao features that can only be explained by one mode of transport or another” [emphasis theirs].

The hats are a little hard to study, since most of them have fallen off the remaining standing statues and, being made of relatively soft rock, they’ve been damaged by things at ground level like people and horses, Lipo says. They’re also not all the same size or shape. But there are some consistencies: indentations in the base of the hat, the rounded shapes they share, and the fact that the statues they were placed on shared a base shape. Given these similarities, the researchers found it was most likely that the hats went on when the statues were tilted forward at an angle of 17 degrees, as part of the process of placing the statue.

Based on their model, the researchers believe that the Rapa Nui islanders built ramps out of rocks and soil in front of the statue, to hold its angle, and that they used a rope system called parbuckling to incrementally roll the hat into place. The grooves in its base helped keep it on while islanders tilted the statue completely upright.

However, “we’re still in the imagining phase,” Lipo cautions. While the physics of their model aligns with the anthropological record, the next step is to actually construct a pukao replica and attempt to raise it in the manner they describe in the paper—a method which would have required fewer than 15 people. That process takes time, he says, and—because hauling tons of rock around is inherently dangerous—requires caution.

“When I started this project, I remember being surprised by the number of different pukao transport methods that researchers had proposed in the past,” says Sean Hixon. Hixon was involved with the study during his undergraduate degree at Binghamton University, and is now a graduate student in anthropology at Penn State. Scientists had proposed many creative solutions previously, he says, but this one “best explains the archaeological record.”

Furthermore, says Lipo, looking for the most efficient method to raise the statues and their hats offers recognition of the fact that, for the Rapa Nui islanders who raised them, these statues performed important economic and social work. “The people on the island did it because it made sense to them,” he says. This way of understanding the statues is a far cry from the theory popularized by Jared Diamond’s book Collapse: How Societies Choose to Fail or Survive, which theorizes that the islanders ruined their environment by building statues at the cost of their health and that of the land they relied on.

On the contrary, says Lipo, gigantic stoneworks built by prehistoric peoples are found around the world, from Stonehenge to the iconic statues of Rapa Nui. Their prevalence shows that they performed some function for all of these peoples, and, with the help of science, he says, anthropologists “really can come up with answers” about how they pulled it off.