It’s amazing no one thought of it before: nuclear fusion from a levitating tire-sized magnet surrounded by 10-million-degree plasma. But... 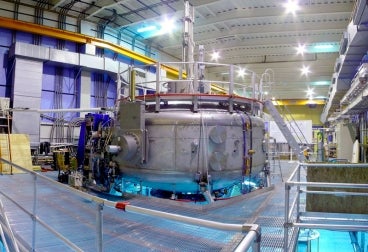 It’s amazing no one thought of it before: nuclear fusion from a levitating tire-sized magnet surrounded by 10-million-degree plasma. But that’s exactly what a joint project between MIT and Columbia University are tinkering with over at MIT’s Plasma Science and Fusion Center on the MIT campus. Using a donut-shaped half-ton magnet made of superconducting wire coils, researchers there are replicating the magnetic fields of planets to manipulate super-heated gases in an experiment that could lead to a breakthrough in nuclear fusion based power.

Nuclear fusion, of course, is the same process that provides the sun with its seemingly endless supply of intense energy. Researchers have long thought fusion could provide a nearly limitless source of carbon-free electrical energy. But creating a working fusion reactor with a solid energy output has proven tricky, as forcing atoms to fuse together is no easy task.

The MIT project offers a unique alternative to the two existing approaches to nuclear fusion that dominate the field. Tokamaks attempt to manipulate atoms by surrounding a central plasma-filled chamber with magnets. In an inertial fusion reactor, high-powered lasers bombard a fuel pellet in the center of the device to set a fusion reaction in motion. But neither approach has been able to achieve the kind of controlled, sustainable fusion reaction that would be useful for clean, dependable power generation.

The MIT project took a big step closer to making that happen with an experiment known as the Levitated Dipole Experiment (LDX). The round magnet was placed inside a 16-foot-diameter enclosure and suspended by a strong electromagnetic field. The magnet was then used to manipulate the superheated electrically charged gas – or plasma – contained within the enclosure.

It had previously been observed that plasmas in space become more densely concentrated when they interact with planets’ magnetic fields, so the magnet produced similar magnetic fields within the experiment. The result: random turbulence caused the plasma to become denser – a critical step to coaxing atoms into fusing together. This was the first time such results had been recreated in a laboratory.

Naturally, a whole lot more research has to go into this kind of technology, and scaling such a device to a commercially operable size would be something of a feat – precision levitating magnets and multi-million-degree plasma aren’t easy things to come by. But the findings do open a potential path to fusion as-yet unexplored, and since it doesn’t appear that mankind is going to quit gluttonously consuming energy anytime soon, any clean energy we can wring from our understanding of physics is a step in the right direction.

Check out the LDX in action below.