The complex physics behind bending it like a World Cup player 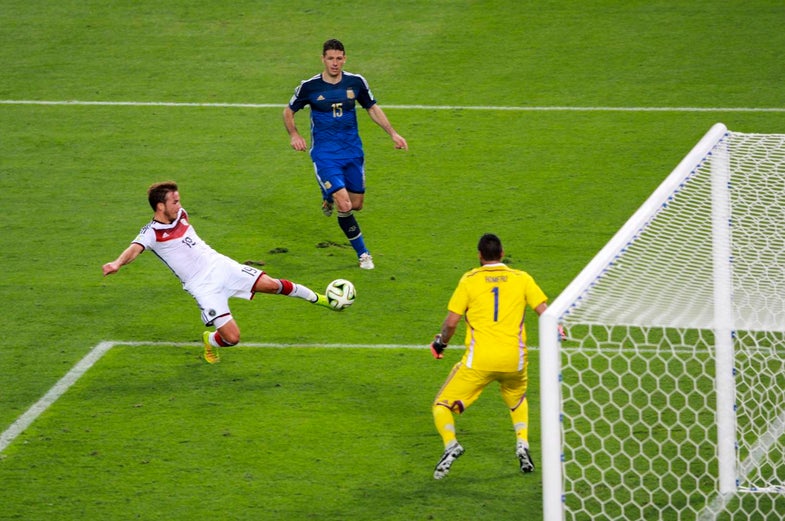 The gems of every World Cup are the impossible goals. Cristiano Ronaldo bending it in over the wall against Spain in the group stage. Benjamin Pavard bending a cross to pull France over Argentina in the group of 16. Takashi Inui sweeping in a perfectly spin-less goal to bring Japan up over Belgium, if only temporarily.

It’s breathtaking to watch. Every spin of the ball moves air across the surface, pushing it into a bend. For a player at this level, bending the ball is an intuitive motion, just a kick to the edge of the ball to arc it in the right direction. For a physicist, modeling air flow around a bending soccer ball is a complex blend of forces all tied to the way the air moves across the surface.

“The physics is rather complicated honestly, but there are simple ways to explain it,” says John Bush, an applied mathematician at MIT. “The reason it looks mysterious is because you can’t see what the surrounding fluid, in this case air, is doing.”

When a soccer ball flies, the air forms a layer around the surface of the ball. As the ball spins, it deflects the air off to one side, Bush says. This deflection of air pushes the ball in the opposite direction.

Oh my Pavard! He sees Di Maria and adds a beauty of his own to pull France level again. #FRAARG pic.twitter.com/gw4PCIKKtY

Benjamin Pavard’s cross (above) starts with a strike on the out side of his right foot, which hits the left side of the ball, initiating a clockwise spin. That rotation flings the air off to the left, and the force created by the air leaving the ball pushes it to the right, explains Bush. Thus, a ball spinning to the right (that’s clockwise) will also arc towards the right. This force is called the Magnus Effect.

“With a soccer ball, that’s how Bekham can bend it,” says Tom Benson, a retired NASA aerospace engineer who designed software to model this problem. One of the tricks in the World Cup is that the Magnus Effect is predictable. A soccer ball with a counterclockwise spin will always bend left, one with a backspin that goes under the ball gives it a bit more upward movement, and topspin causes a drop.

“It helps the goalies, because the goalies then see uniform curvature when guys are bending it taking shots at them,” Benson says. “If he can pick up the spin right, it’s going to be the same amount of curvature, and he knows where to put his hands.”

This is in part why players are much more likely to take bending shots during free kicks when goalies can’t see their kicks quite as well because of the wall of defenders, says Bush. There a player is trying to get the ball over the wall and down, like the gorgeous shot from Cristiano Ronaldo in Portugal’s group stage game in the first round of the World Cup against Spain.

A player can change how the ball spins by kicking with the inside or outside edge of their foot to place the spin, says Bush. In the shot pictured above, Ronaldo kicks with the instep of his right foot, and the ball bends back around to his left, because of the counterclockwise spin he put on the ball. Between the lift on the ball, which is necessary to get over the wall, and the sweeping curve, the goalie didn’t even have a chance to move before the ball hit the upper corner of the net.

It’s the texture and design of the soccer ball that keeps the air moving across the surface of the ball in a predictable way, and keeps the Magnus effect from reversing. “If you have a perfectly smooth ball, the ball can bend the wrong way so to speak,” says Bush. “I was playing soccer on the beach in Nice, and we were playing with a beach ball and it was bending the wrong way. I was going—oh my god, my world was collapsing here!”

During the World Cup in South Africa in 2010, the ball was essentially too smooth and the Magnus effect would flip, bending the ball counter to the way players expected. “If you hit two balls exactly the same, one rough and one smooth, they will bend in opposite ways,” says Bush, who demonstrated the phenomenon in a 2013 paper. This flipping of the Magnus Effect is partly why that World Cup continues to be so memorable.

Back in 2010, the 10 World Cup arenas were at very different altitudes from sea level in Cape Town to just over a mile above sea level in Johannesburg. It meant that games were played with different densities of air. This is partially why NASA and Benson got involved in modeling what was happening with the ball that year. At the different air densities the ball was traveling at very different speeds, Benson says. It’s much harder to get bend on a ball if the air is less dense because there is less pressure to push the ball in one direction or another.

Since the 2018 World Cup is all played at the same altitude that isn’t impacting this World Cup, but Benson says you can see this effect in action in baseball stadiums at higher altitudes. “Denver’s a mile high, and at a mile-high you’ll lose 25 to 30 percent of the air density,” he explains, “therefore you lose an inch or two off your curve ball.”

If a ball isn’t spinning, it does something called knuckling, where the air peels off the ball in random directions, causing it to bob and weave in the air unpredictably, says Taketo Mizota, a fluid engineer at the Fukuoka Institute of Technology in Japan. The constant Magnus Effect is no longer in play, and instead the vortexes of air move around the ball’s surface. This movement pushes the ball irregularly, creating the bobbles, Mizota says.

This knuckling motion only happens when the ball moves without spin, and is usually achieved when a player manages a sharp, fast touch of the ball, typically right on the air valve where the ball is most firm, says Bush. This prevents as much spin from transferring during the kick as possible.

Takashi Inui hits a rocket from outside the box to double their lead. #BELJPN pic.twitter.com/UciMMWYe0T

Takashi Inui managed to get a perfect spin-less goal when Japan played Belgium in the round of 16 on June 2nd this year. When you watch it in slow motion, you can see that the pattern on the ball barely moves at all as it floats into the goal. Its lack of spin kept the goalie, Thibaut Courtois, from being able to predict where it was going until it was too late. “All the goal keepers quiver before the kicker who can shoot these slow spinning soccer balls,” says Mizota. (Although this year it wasn’t enough to put Japan through to the quarterfinals.)

But a World Cup soccer player isn’t slowing down to think about fluid dynamics before they make these elegant touches. “There’s the physics and then there is the skill of shooting. You won’t see an engineer or a physicist step on the field and dazzle with its shots,” says Bush with a laugh. “The skill is developed through practice, rather than a knowledge of the physics.”