It could expand our options for wave-energy harvesters. Anyone who’s ever played in the surf knows that waves have enough power to knock you off your feet. Various designs for getting some of that energy out of the ocean and into our homes and cars exist, but the technology has always lagged behind its renewable cousins.

Compared with solar panels and wind turbines, the harsh marine environment makes wave energy devices more expensive, and the need for large waves restricts possible installation locations. Much of the engineering research so far has focused on making devices more cost effective by increasing how much power they can extract from a given wave, but one team of physicists is testing a different approach: just make the waves bigger.

Windmills and wave devices both take advantage of movement in nature to generate electric power, but while three-bladed turbines increasingly dot the landscape, bobbing buoys have yet to take over a single US shoreline. “We think of the wave energy field as being thirty years behind wind,” says Kelley Ruehl, a water power researcher at Sandia National Laboratories.

From snake-like strips that flex with incoming swells to seafloor plates that sway with passing waves, a wild variety of designs compete for dominance, each with their own set of tradeoffs. Wave energy harvesters must operate in a more punishing environment than other generators too. Saltwater breaks down materials, barnacles spring up in crucial crevices, and the whole system has to work where the waves (and forces) are as violent as possible. To make matters worse, only certain areas have undulations intense enough to be worth experimentation. “The west coast [of the U.S.], Alaska, and Hawaii,” Ruehl says, ticking off a few. “Where you think of as surfing destinations, that’s where you have the biggest waves.”

If a team of physicists led by Huanyang Chen of China’s Xiamen University can scale up a table-top device they described in Physical Review Letters earlier this month, however, they might expand the number of spots suitable for wave energy worldwide.

Chen, a physicist, usually spends his time designing materials to trick light into acting in bizarre ways, such as the so-called invisibility cloaks that exploit nanometer-sized surface features to bend light waves around an object undisturbed. He might not have thought to get into water engineering if not for his friendship with Zhenyu Wang, a professor of hydraulic engineering at Zhejiang University. One day over a coffee, they discussed whether they could tame water too, since both water and light waves behave similarly in a mathematical sense. Wang had access to a football-field sized wave tank at his university, so they decided to give it a try.

While changing the behavior of light waves depends on manipulating their response to magnetic and electric fields with nanometer-scale objects, controlling water waves is a lot easier. These waves also depend on two numbers: acceleration from Earth’s gravity and the ocean’s depth. “You cannot change gravity,” says Chen, “so we changed the depth.” Plus, water waves are a lot bigger. 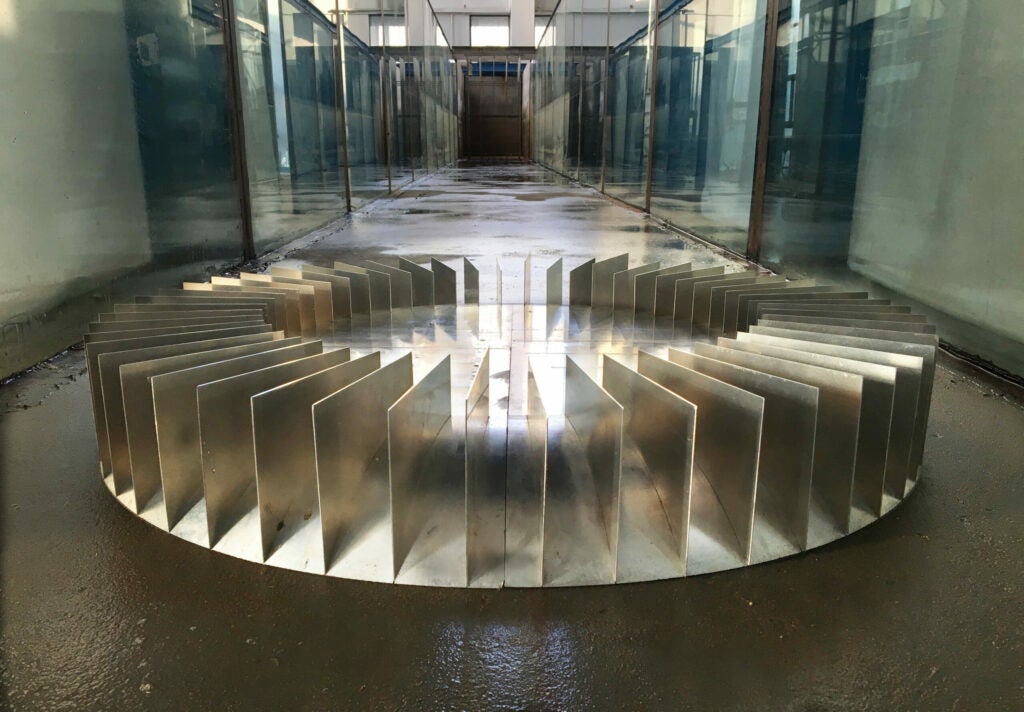 This device guides passing waves into the center region, concentrating their energy.

Borrowing ideas from a 2015 design that concentrated microwaves, Chen whipped up a much larger structure that could focus water waves in a similar way. It features a bunch of rectangular fins arranged in a ring, each set into a surface that rises as you move inward (see above). When waves within a broad range of wavelengths enter the ring, the fins guide them up the slope to the smaller and shallower inner region, where their concentrated energy causes them to erupt with additional force. The setup’s smooth (as opposed to stepwise) change in depth also “cloaks” the interior for one specific size of waves (which means that waves of that type emerge from the device essentially unchanged), but this is a bonus feature that doesn’t affect its ability to concentrate waves, Chen says.

In one demonstration (seen in the videos below), Chen and Zhenyu used a 17-inch wide concentrator to transform fractions-of-an-inch-tall ripples into wavelets three times as high, rocking a paper boat for dramatic effect. Chen says the amplification factor depends on the distance between the outer ring and the inner ring, and that engineers could boost it further in practice.

Tripling the height of a wave increases the available energy nine times, so getting supersized versions of these concentrators out into the wild could expand wave energy production zones far beyond just surfing destinations. But the devil is in the details, and plopping a few buoy generators in the center (instead of a toy boat), and peppering the east coast with them wouldn’t necessarily be a winning move.

The idea of maximizing how much energy we can get out of a wave is obviously of great interest to the wave energy field, Ruehl says, “but you have to think about where is this being deployed. Do you have a whale migration path there? What if it gets obstructed with seaweed?”

Unlike buoys or bottom-mounted plates which live on just the surface, or just the seafloor, Chen’s concentrator would cut through the whole water column from top to bottom, which makes selecting building sites challenging. Putting one near shore risks interfering with both underwater wildlife and surface activities like shipping and fishing, but building offshore would require an impossible megastructure to reach the bottom. If suitable locations exist, they’ll be limited.

Nevertheless, Chen and Zhenyu are game to try. They imagine testing a hundreds-of-feet wide concentrator between islands just south of Shanghai. The seafloor is relatively flat and shallow there, and the government has already deployed one tidal power generator.

Even if this design runs into trouble, Chen expects that the concentrator is just one of many optics tricks that engineers can co-opt for the marine arena. “For optics it’s very hard but for water waves, it’s very simple,” Chen says. “This is just the start.”