The quest for the perfect soccer ball continues. 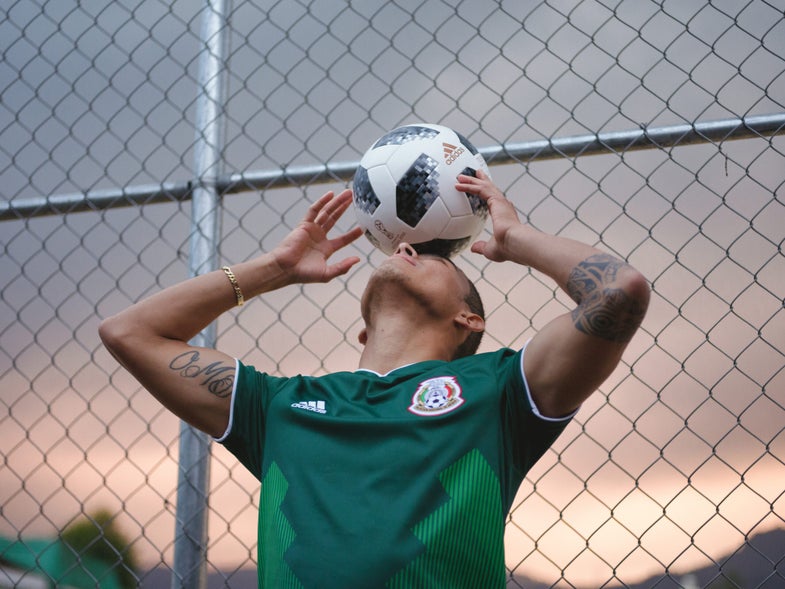 Every four years there’s a new ball for the World Cup—and every four years players are unhappy with it. Maybe it’s too light and has too much lift, like the 2002 Fevernova. Or maybe it wobbles unexpectedly in the air, making it harder for goalies to predict its motion, like the 2006 Teamgist. Or maybe the ball suddenly changes speed, dropping out of the air and causing accidental handballs, like the 2010 Jabulani.

At the World Cup level, these tiny changes in a ball’s aerodynamics can legitimately impact a team’s performance, so the intense scrutiny of the World Cup ball is perhaps to be expected. “You could argue that it’s the most important piece of equipment in the most popular sport in the world,” says John Eric Goff, Professor of Physics at University of Lynchburg.

Adidas designs every World Cup ball, and on top of being a big seller for them, engineers at the company are constantly a little closer to the perfect ball, Goff says. The ideal soccer ball is a pimple-covered, perfect sphere, its surface just subtly textured enough to keep the airflow around the ball slightly turbulent. Unintuitive as this might sound, the ridges and pimples on the ball make it more aerodynamic, helping the ball to fly through the air more stably.

The Telstar 18, the design for the 2018 World Cup in Russia, is as close to a perfect sphere as you can get. It has subtle pimples and six thermally bonded panels designed to avoid knuckling, which is the characteristic bobbing and weaving movement when a ball is kicked without spin. All 32 teams have been able to play with it since November in preparation for the tournament, which runs from June 14 to July 15. But despite its similarities to the old ball, players have grumbled about the Telstar 18. Compared to the last few World Cup balls, the Telstar 18 is very similar to the ball used for the 2014 World Cup in Brazil. It won’t fly quite as far down the pitch, and will wobble in the air a little differently, but aerodynamic testing suggests it will be more stable in the air overall.

“I kind of feel sympathy for the players and especially the goalkeepers that have to get used to a new ball,” Goff says. So far the Telstar 18 has received criticism from a few goalkeepers that played with it starting in November, unhappy with how it moves in the air and the way the surface feels. Goalkeepers, unlike every other player on the pitch, have to predict where the ball will go in order to block it, while also not having the freedom to run around the field to adjust as the ball flies. That means goalies often have the most complaints about a new design. “Every time there’s a World Cup and a new ball the goalkeepers complain, because they’ve been given a new ball,” says Goff.

Using a wind tunnel, Goff has researched the flight properties of the Telstar 18, drawing its drag curve to discover where the ball might dip and swerve in the air, similar to the knuckleball free kicks favored by Cristiano Ronaldo “Even if aerodynamically the Telstar 18 isn’t that different from the Brazuca, it’s still going to wobble a little bit differently because the panel shapes are different,” Goff says.

When any object goes through the air, a thin cushion of air wraps around it that stays relatively still. This boundary layer is why you get dust trapped on your ceiling fan. At slower speeds, the air around a soccer ball moves smoothly over the surface and separates off the sides of the ball at its widest points. Imagine a ball moving from right to left across a clock, Goff explains, so traveling from the 3 to the 9. With laminar flow, the air flows over the surface and then flows off at the 12 and 6, which creates more drag in the air. Drag slows the ball down faster. At higher speeds, the air moves turbulently across the ball’s surface and peels off at the 2 and 4. The wind effectively wraps around the back. This turbulent flow has less drag, which means the ball keeps moving at high speed for longer.

The trick is that as flying objects have a threshold where the air around them goes from turbulent to laminar (and vice versa). Depending on the speed at which a soccer ball makes that transition, players can run into problems.

In 2010, the infamous Jabulani balls for the World Cup in South Africa transitioned from turbulent to laminar flow between 50 and 45 miles per hour, right at the speed for corner and free kicks. The transition between these different types of flow causes even more drag on the ball, which caused the Jabulani to wobble in the air and drop in ways that players weren’t expecting.

“Had I seen the drag curve for Jabulani prior to the 2010 World Cup in South Africa I would have been calling FIFA and Adidas saying please don’t use this ball,” Goff says. The fact that the Jabulani became unpredictable and beach-ball-like during these long passes really helped Spain win in 2010, Goff says. The Spanish team relied almost entirely on short precise passes, without long kicks that became unstable with the Jabulani ball. “That was the perfect example of a team that really fit the style of play for that ball,” Goff says.

This year, the ball shouldn’t have that kind of impact on which team wins the World Cup. In wind tunnel tests, Goff found that Telstar 18 has a very similar aerodynamic profile to the 2014 Brazuca ball, which flew without the wobbles of the Jabulani. The Jabulani was the first ball to have six seams and despite having a roughened surface, it was too smooth, says Goff. When the Brazuca was released, it had 68 percent more seams than the Jabulani to help change the airflow around the ball. The Telstar 18 is even more improved. Instead of transitioning to laminar flow in the middle of free kicks, Goff found that the Telstar 18 goes through its drag crisis at a lower speed of 38 miles an hour.

Transitioning at this point is ideal because short passes will happen at speeds under 38 miles an hour, whereas corner kicks and long passes will happen at higher speeds. On the Telstar 18, the location of the seams, their length, and the pimples that cover the ball’s surface create subtle design elements that control how the ball moves.

In building the ball, Adidas was trying to create something that flies as evenly and consistently as possible. “The construction also provides enhanced power distribution and consistent response when struck,” an Adidas said in a statement. “The surface texture further optimizes the ball’s flight, touch and surface glide.”

Despite the similarities with the Brazuca, the few differences between this ball and what players have gotten used to over the last four years will have an impact on play, says Firoz Alam, an aerodynamics engineer at the Royal Melbourne Institute of Technology in Australia, who has also performed wind tunnel tests on the Telstar 18. “When the player is making a short pass, they have to push a little harder, because at less then 60 kilometers per hour [or 37 miles per hour]it has more flight resistance than the Brazuca,” says Alam. The mid-range passes and corner kicks that gave the Jabulani so much trouble have been resolved. Compared to the Brazuca, the Telstar 18 is also more aerodynamically efficient in the 40-50 mile an hour range, so Alam says players will actually have to kick a little softer or they’re likely to overshoot. Over 55 miles an hour the two balls will feel very similar.

However, in Goff’s wind tests, he and his team noticed that the Telstar 18 had a little more resistance at high speeds, and predict that the ball will go about eight to nine percent less distance down the pitch on long kicks. This means that Manuel Neuer, the goalkeeper for Germany who was considered to be the x-factor that brought Germany the win in 2014, might not have quite as much of an impact clearing balls from the goal this time around Goff says. “You’d see him just kicking the ball way, way down the pitch, and [this World Cup] you might notice that some of those kicks aren’t quite as long as before,” Goff says.

Although the length of kick may end up being a little shorter, the changes make the Telstar 18 more balanced, says Alam. On other balls, Alam and his team have found that there is a difference in how the ball flies based on where it’s kicked in relation to the seams. His tests have found that the Telstar 18 ball doesn’t have as much variation. The total length of seam of the Telstar 18 is 14.1 feet, 3.28 feet more than on the Brazuca. With the longer seam, and more symmetric panels, no matter how the ball is turned there is the same amount of seam exposed. “The other two balls were not like that, they were significantly different,” he says.

With the increased seam length, Goff says there was actually a risk that this ball would be too rough. “Very little changes in those textures can have noticeable aerodynamic effects,” he says. The fact that the Telstar 18 has almost the same drag curve as the Brazuca, with aerodynamic properties changing at about the same speeds, is impressive. “It has to be an engineering and technical challenge,” he says.

“We found that the grooves and pimples on the Telstar 18 ball are very orderly and a little bit flat,” says Alam. The pimples that texture the surface of the ball are not as raised as on the Brazuca, and the seams are narrower and shallower than they have been in the past. All of the elements of the ball—the increased seam length, the more regular pimple pattern, orderly pimple and seam shape—add up to a more symmetrical, balanced ball, Alam says. “We expect this ball to have better flight stability.” And since all 11 stadiums in Russia are at the same altitude, Alam says the ball should play the same way across all matches.

With that in mind, for this World Cup, we might not be able to blame the ball for weird plays and freak shots. It’s all on the players now.