Who Would Win In A Fight, A Cold-Blooded Dinosaur Or A Warm-Blooded One?

One scientist hits upon a creative way to argue that dinosaurs were endothermic. 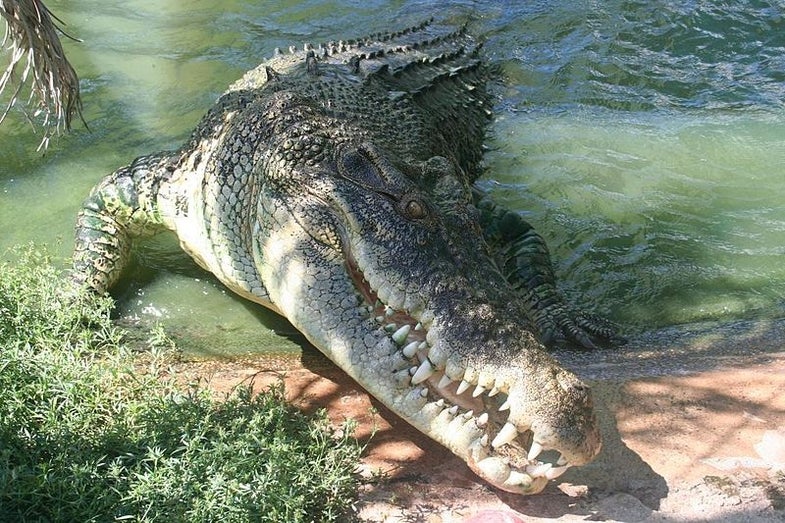 Were dinosaurs “cold-blooded” or “warm-blooded”? Paleontologists still aren’t sure. Now, one environmental scientist has painstakingly gathered the data to answer a related question: Given they were the same size, who would win in a fight, a cold-blooded dino or a warm-blooded one?

A warm-blooded dinosaur would have definitely won, according to a series of fascinating experiments University of Adelaide scientist Roger Seymour conducted. Dinosaurs were therefore probably warm-blooded, Seymour wrote in a paper published in the journal PLOS ONE. They would have needed the power advantage of warm-bloodedness to compete as successfully as they did with mammals in Mesozoic times.

Before we go on, let’s just define warm-bloodedness and cold-bloodedness. Warm-blooded—or, scientifically speaking, endothermic—animals use sophisticated bodily processes to maintain a constant, high body temperature. Modern birds and mammals are endothermic. Cold-blooded or ectothermic animals, on the other hand, aren’t able to regulate their body temperatures as closely with internal processes. Instead, modern crocodiles and other ectotherms sunbathe or seek shade to maintain a healthy temperature.

Ectothermic animals aren’t necessarily colder than endothermic animals. An ectotherm in a hot climate can be just as hot as an endotherm. And a very large ectotherm may be able to maintain fairly high body temperatures even in cool weather because of the physics of its size.

Paleontologists have never settled in which camp dinosaurs belong.

For his study, Seymour decided to determine the rates at which crocodiles and mammals are able to generate energy, as a proxy for the powers of an ectothermic versus an endothermic dinosaur. Crocodiles and birds are the modern, surviving descendants of dinosaurs.

Seymour mathematically calculated the powers of mammals of different sizes, using equations other researchers have already figured out. He looked at both aerobic (oxygen-using) and anaerobic (non-oxygen-using) power in mammals. So far, so good.

He then had to do the same for crocodiles. Here, he had to do some of his own work.

To figure out the aerobic energy generation of crocodiles, he measured the respiration of 44 captured crocs of varying sizes.

To figure out the anaerobic energy generation of crocodiles, he had to get measurements of a crocodile’s muscle and blood while it’s working to its maximum. How do you convince a crocodile to work to its maximum? Seymour described an experiment he performed with two colleagues in 1995:

Wild crocodiles (ranging in mass from 0.24–188 kg) were approached by boat at night and secured to a thin cord by a barb through the skin. This caused the animals to thrash violently to the point of complete exhaustion in water, and they failed to right themselves on landing. The duration of exercise was measured and blood and tail muscle samples were obtained at exhaustion.

After all that, Seymour determined that small endotherms and ectotherms have about equal power, but between larger animals, endotherms are much more powerful. He had exact numbers for how much power an animal of a certain size and metabolic strategy would have. The larger the animals, the greater the advantage it would gain from endothermy.

How does a crocodile survive, then? It mostly sits and waits for its meals to wander by, so it doesn’t need to be able to generate sustained energy. An energetic dinosaur, on the other hand, would have needed endothermy, Seymour argues.