The extinct turtle weighed as much as a hippo and swam in the ocean off Spain. 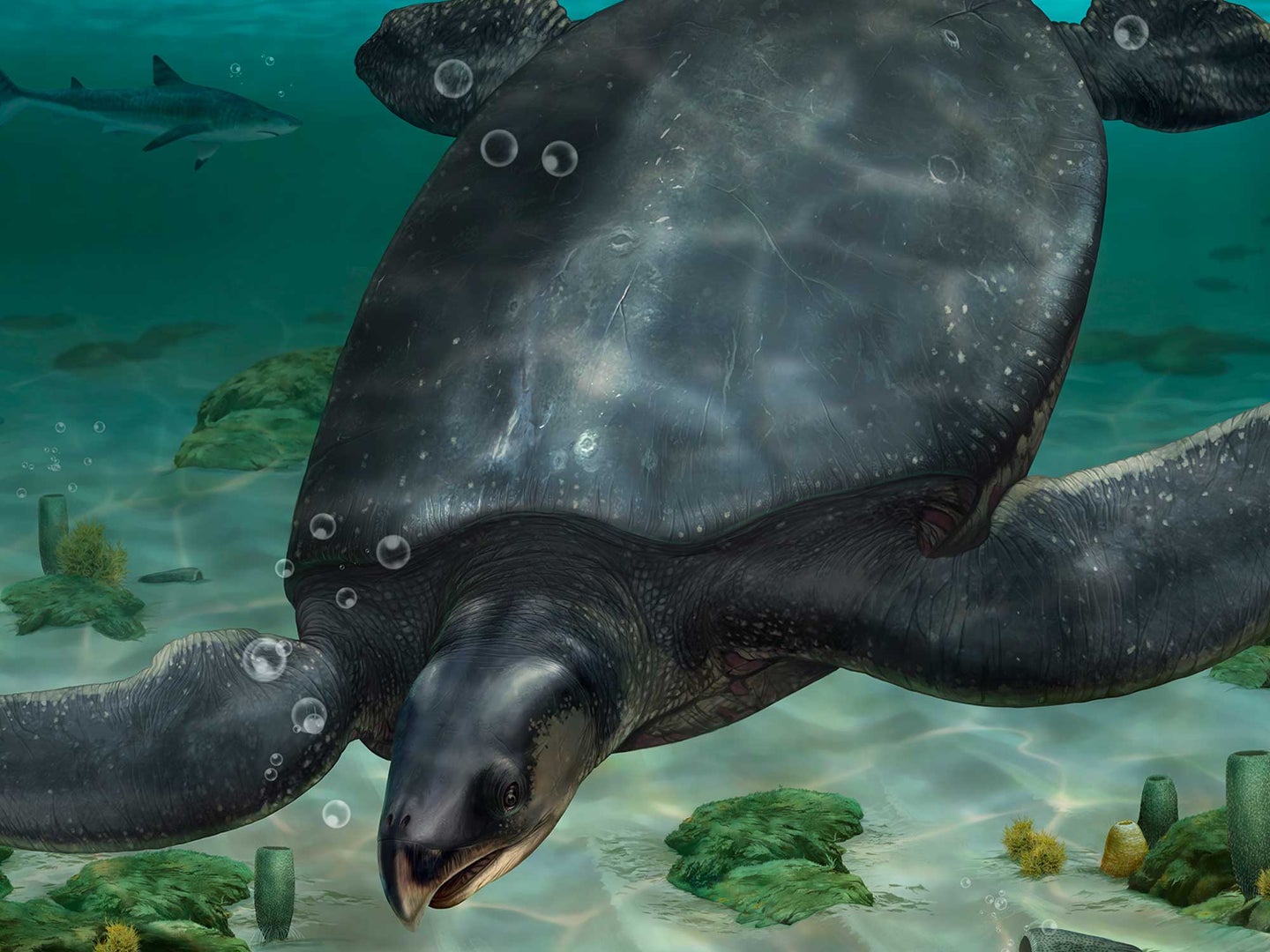 If the Teenage Mutant Ninja Turtles were looking for heavyweight back-up while fighting their arch-nemesis Shredder, it would be hard to do better than a newly discovered species of ancient sea turtle. Leviathanochelys aenigmatica is the newest member of an extinct genus named Archelon, which boasts multiple kinds species of turtles that could grow to 15 feet long and weighed in about 7,000 pounds, more than a hippopotamus.

The new species, described in a paper published today in the journal Scientific Reports, swam the seas surrounding the present-day North American continent during the end of the Cretaceous period, about 145 million to 66 million years ago.

“The discovery of the new species itself was a surprise,” Albert G. Sellés, a co-author of the paper and postdoctoral researcher at Universitat Autònoma de Barcelona in Spain, tells PopSci. “We are used to finding dinosaur bones in northeastern Spain, and some of them are really big, but until now we have never found the fossil remains of a marine animal, and even less one of such colossal size.”

According to Sellés, a hiker found the bone fragments near the small village of Coll de Nargó in Catalonia in August 2016. The the remains were excavated between 2016 and 2021. The fossils include a fragmented but almost complete pelvis and parts of the upper shell called the carapace. The study authors date the specimens back to the Cretaceous period’s Campanian Age, roughly 83.6 million to 72.1 million years ago.

From the size of the pelvis, the team was able to estimate the turtle’s size: It was gigantic and aligns with other massive Archelons. “The size of Leviathanochelys aenigmatica is perhaps the most surprising characteristic. With up to 3.7 meters [about 12 feet] in total body length, it is within the top three largest marine turtles ever live on Earth,” Sellés says. The researchers are still working to determine what evolutionary processes could have made such a huge animal possible.

Further study will be needed to learn more about what Leviathanochelys aenigmatica ate—and who ate it. But there may be one tiny clue to its predators. “It is still too early to say for sure, but it is likely that the turtle was preyed on by sharks,” said Sellés. “This conjecture is based on the fact that the shell presents some peculiar marks that could be from bites, and that a shark tooth was found near the skeleton.”

The paper says that this discovery shows that gigantism in marine turtles evolved independently in different groups in Europe and North America, where fossils of Ctenochelys acris and Peritresius ornatus and other ancient sea turtles have been found. It has been difficult for scientists to develop a consensus for the role these animals played in the evolutionary history of sea turtles, and this discovery will help fill in those gaps. Today’s largest sea turtles are the mighty leatherbacks (Dermochelys coriacea). The largest leatherbacks can grow up to 6 feet, half the size of Leviathanochelys aenigmatica, and can weigh up to 2,000 pounds.

“One of the most beautiful things about doing paleontology is that each new discovery represents a new challenge. And with each discovery, as if it were a giant puzzle, we rediscover the past history of our planet,” Sellés says.