A geomagnetic curveball 42,000 years ago changed our planet forever

The future is unpredictable—just ask the Neanderthals. 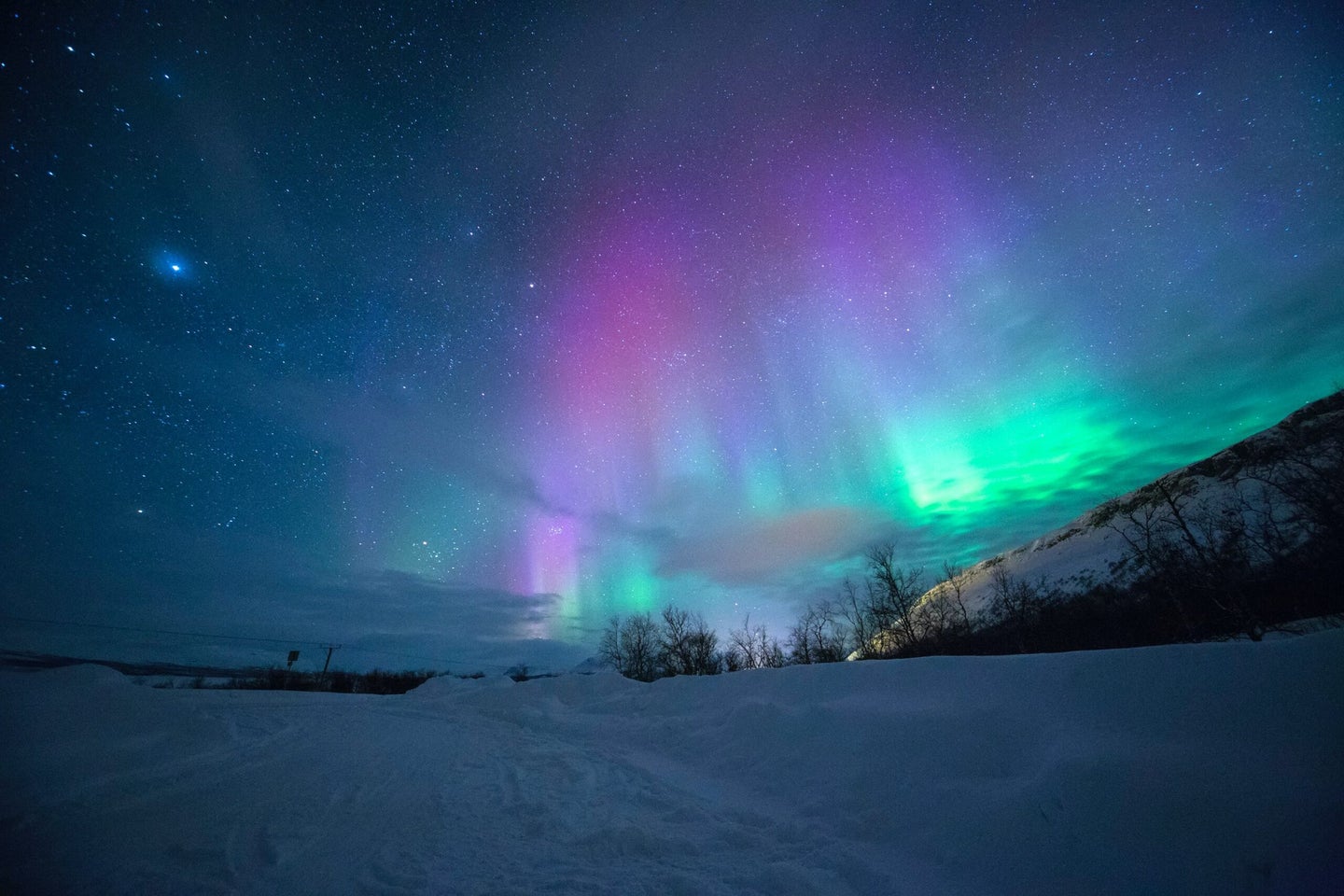 Auroras lit up the sky as the magnetic field over the Earth weakened 42,000 years ago, possibly influencing climate, evolution and more. Unsplash
SHARE

When one crazy thing happens, it often feels as if a series of other bonkers events follow suit—this year’s events definitely fall in line with this thinking. This cascade of unfortunate events takes on a whole new level when those incidents include extinctions, massive climate change, and major chemical changes in the atmosphere—which is exactly what happened about 42,000 years ago.

All around the same time, the Neanderthals and large megafauna died out, cave art started popping up in Asia and Europe, North America saw swaths of new ice sheets, and, if that wasn’t enough, the magnetic poles went for a twist that caused elements like radioactive carbon to be more heavily featured in the atmosphere, and eventually in living animals and plants. And while scientists have hypothesized in the past that these events might somehow be linked, pinning down those exact mechanisms—without a time machine that would have us walking around with woolly mammoths and dire wolves, that is—has been tough.

However, the next best things to a time machine are ancient trees that have been preserved for thousands of years, like the Kauri of New Zealand that can live for up to two thousand years. When they do die they can get trapped and preserved in wetlands for thousands more years. Researchers looked at the rings of some of these ancient trees and found a snapshot of time where radioactive carbon spiked in the atmosphere during the Laschamp excursion, when the magnetic field weakened 42,000 years ago thanks to the Earth’s magnetic poles taking a wander. But even more importantly, these trees give us new insight into the timeline of all the weird happenings of 42,000 years ago and allowed researchers to see that extinction, climate change, and more were happening very close in time to the Laschamp event.

“It would’ve seemed like end of days stuff,” says lead author Chris Turney, an earth scientist at the University of South Wales, who has nicknamed the overlapping of these crazy cosmic events as the Adam’s Event. The study, which Turney co-authored, was published last week in Science. So while a shift of geomagnetic poles may be somewhat of a forgotten part of our planet’s history, its impacts are ever present.

Our magnetic poles basically give us the up and down of where our planet is rotating around itself and normally you can figure out where that is using a compass. But, like so many happenings on Earth, these poles are never exactly in the same place and tend to gently shift so that what we picture as the north pole on a map is likely slightly different from where the magnetic north truly is. Most of the time, the poles stay relatively in the same place, but when they go for a large wander away from their normal spot, it’s called an excursion. And when the poles flip completely, and north becomes south, it’s called a reversal.

What happens during an excursion or a reversal is that our magnetic field, which acts as a shield from high-energy particles blasting the planet from space, weakens. And in the case of Adam’s event, the field more or less vanished and “left the door wide open”, exposing the world and its inhabitants to more intense radiation, UV light, and widespread auroras, says Turney. “In that transition, going from one to another, the magnetic field essentially collapsed almost to nothing.”

So what does all of this have to do with the demise of megafauna and the Neanderthals? Scientists had previously thought that a magnetic pole flip and its resulting crash had little impact on the Earth and its inhabitants, but this study shows the exact opposite: linking this strange phenomenon with other life-changing events at the same time.

And while fascinating from a historical perspective, it also has implications for the way we deal with climate change today. The thing about magnetic pole excursions and flips is that they can happen at literally any time, although they are infrequent. But if something like this were to happen in modern times, or even a temporary disturbance of our magnetosphere, such as geomagnetic storms like the Carrington event that took place around 150 years ago, it would be seriously detrimental.

“We live in an electronic world, and a weakened [magnetic field] could cause damage to our electrical field,” says Joseph Meert, a geochronologist at the University of Florida who was not involved in the study. “[The magnetic field] is our shield. It protects us from incoming radiation. We kind of owe our existence to the magnetic field.”

As we brace for the impacts of human-induced climate change, it’s important to remember that our models don’t prep us for random, crazy events like magnetic pole flips, which makes it all the more important to lower carbon emissions. “The last thing we need is a completely random event that affects us even more,” Turney says.

Nature will always throw us curve balls that can have detrimental effects. For a future that is sustainable, being over prepared is the minimum for surviving impacts that nobody saw coming.