A fossilized egg laid by an extinct, human-sized turtle holds a rare jackpot

These turtles lived in the Cretaceous period and were wiped out with the dinosaurs. 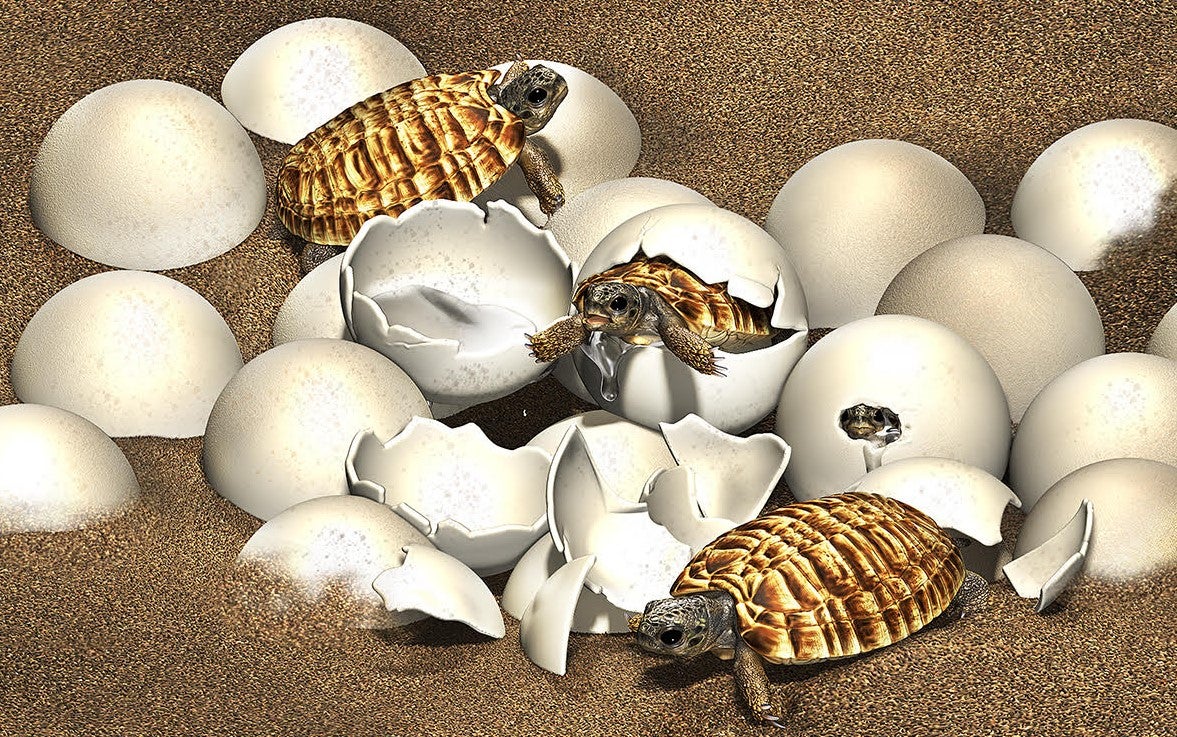 An artist's impression of a nanhsiungchelyid nest, with hatchling baby turtles. Their eggs were extra thick. Masato Mattori
SHARE

In the central Chinese province of Henan, a farmer discovered a black orb with a vaguely blue tint, about the size of a billiards ball. While he and initial researchers thought they had found a dinosaur egg, it turned out to be something much rarer: a huge fossilized turtle egg—with an intact turtle embryo still inside.

The biggest turtle eggs today are just a few inches long, with papery thin shells. The newfound fossil is massive by comparison. Paleontologists concluded that the egg belongs to the nanhsiungchelyids, an extinct group of land-dwelling turtles that lived alongside dinosaurs 145 to 66 million years ago, during the Cretaceous period. The turtle parent who laid the hefty egg was likely quite the beast—researchers estimate that its shell was more than 5 feet and 4 inches long. The new paper was published today in the Proceedings of the Royal Society B.

“This is actually the first time that [fossil] turtle eggs or a nest really could be attributed to a particular turtle,” Darla Zelenitsky, a co-author of the study and a paleontologist at the University of Calgary, told CBC. She added that the egg could have been entombed when a nearby river system overflowed during the rainy season, thus preserving it as a fossil.

The physiology of the ancient embryo is surprisingly similar to those of modern turtles. Raul Diaz, a reptile evolutionary biologist specializing in embryos at California State University at Los Angeles who was not part of the study, told National Geographic that the specimen’s bone structure is more or less what you’d expect to see today. “It’s almost—in my head—indistinguishable from what I would see in the lab.”

While the fact that turtles and dinosaurs once roamed side by side is well-established, the rarity of fossilized eggs (let alone with intact embryos) means that very little is known about the animals’ nesting practices. This egg, and its robustness, give paleontologists more clues.

The nanhsiungchelyid turtle shell is four times thicker than those of the biggest Galapagos tortoises today. That thickness may have been an adaptation to keep embryos safe in a hot and dry climate, or as a way to prevent breakage when the eggs were buried under mounds of wet soil.

It also bolsters the theory that these turtles spent all their time on land, Jordan Mallon, a paleontologist at the Canadian Museum of Nature in Ottawa not involved in the research, told CBC. He added that this has been debated for some time, and that the techniques in the study could later be used to answer lingering questions about the evolution of turtles, for example how their shell characteristics have changed over the millennia.

These turtles’ land-based lifestyle may have also been their undoing. The nanhsiungchelyids were wiped out approximately 66 million years ago by the same fated asteroid that killed the dinosaurs. Other more aquatically-inclined turtles survived the blast, perhaps shielded by their underwater dwellings. Whether that’s the whole story remains to be seen, but after the Cretaceous period, nanhsiungchelyid turtle shells disappeared from the fossil record, never to be seen again.