Can I be allergic to alcohol?

Alcohol allergies are pretty rare, but intolerance is a lot more common. 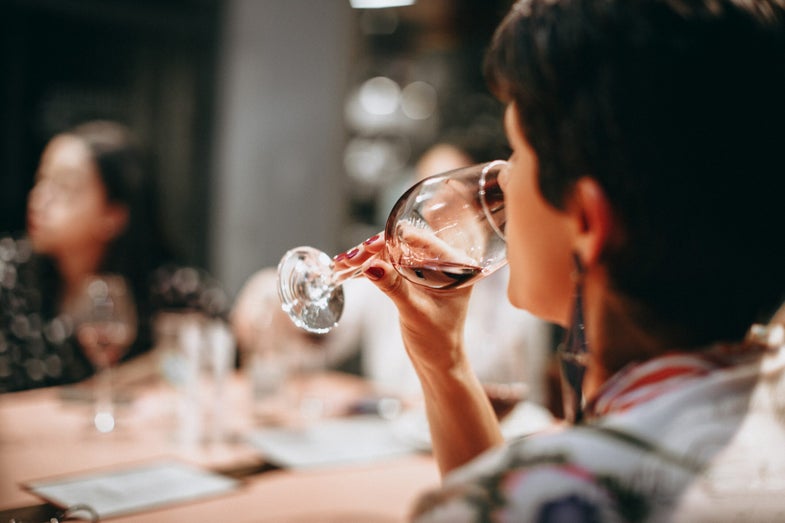 This post has been updated. It was originally published in January 2019.

Every time I enjoy a cold hard cider, I feel nauseated. Not immediately—first comes the congestion. Then I feel woozy. Then, hours later, my stomach churns. Everyone I know has made some variation of a joke about me being a lightweight, none of them funny, but my cousin gets exactly the same reaction.

So I Googled it.

Every result I found made some anecdotal reference to having some kind of alcohol allergy or intolerance, and I’ll be honest, I jumped right on that explanation without much real proof. As a test, I took an antihistamine just before I drank the next time, and voilá—no reaction. This is not a particularly high standard of evidence. As a science journalist, I should know that. So I did what every good science writer does when they have a personal health issue: I turned it into a story. This story.

First, I emailed some experts to see what they had to say about alcohol allergies. The news wasn’t great for my supposed reaction.

“True allergic reactions to alcohol, that includes wine, spirits, beer and the like, are not common,” Clifford Bassett, the medical director of Allergy & Asthma Care of NY, explained to me. He noted a German questionnaire-based study that showed intolerance to alcohol, not an alcohol allergy, to be far more prevalent, and identified some of the components of wine (sulfites, tyramine) that may be the actual culprit. Ethanol itself did not seem to be to blame. Similarly, he said he’s treated people who were actually sensitive to barley, hops, or malt rather than beer, or to fruits mixed into cocktails rather than the alcohol itself.

Sarena Sawlani, medical director of Chicago Allergy & Asthma, agreed. “Any allergic reaction to an alcoholic drink would really need to investigate the content of the beverage first,” she said, since most contain many other ingredients that you may be allergic to. Rye, hops, wheat, yeast, grapes, barley, gluten, and sulfites are all fairly common allergens that could be lurking in your alcoholic beverages, tricking you into thinking you’re reacting to ethanol.

True alcohol allergies also tend to be more severe than the congestion and nausea I experienced. Generally you get hives, or even anaphylaxis. So perhaps what I described was an intolerance, not an allergy to alcohol. (In recent years, people have become notoriously bad at distinguishing one from the other.)

Alcohol intolerance in its most extreme form is often called Asian flush, even though it can strike people of any ethnic background. It’s caused by a faulty version of an enzyme called aldehyde dehydrogenase. Normally, the ethanol in a cocktail gets broken down into aldehydes, another kind of organic molecule, by an alcohol dehydrogenase and then those aldehydes get broken down again by (you guessed it) an aldehyde dehydrogenase. Genetic mutations in both kinds of dehydrogenases are common, but it’s the slow versions of aldehyde dehydrogenase that often cause the flushing. When it doesn’t work, aldehydes build up and causes symptoms like facial redness (hence the flush), hives, a stuffy nose, nausea, and low blood pressure. It’s more common in the Asian population simply because of genetics—families pass down the flawed enzyme, and it happens to have been propagated a lot in Asian communities. About a third of those with East Asian heritage have it.

But there are other factors that put you at higher risk of alcohol intolerance. Those with asthma or hay fever are more likely to have it, as are those who are already allergic to grains or other foods (also, those with Hodgkin’s lymphoma).

It’s also possible that my congestion is just a normal side effect of alcohol that I’ve convinced myself is an actual intolerance. Bassett notes that alcohol has a natural vasodilatory effect in the skin (that’s why you feel warm when you start drinking), and that can also lead to short-term nasal congestion as the many blood vessels in your nasal cavity expand. Maybe I’m just misinterpreting the evidence. Acid reflux, a very common reaction to alcohol, also causes nausea, which could easily explain that issue. And allergy symptoms generally are subject to a strong placebo effect. Studies of allergic rhinitis (that’s the nasal reaction to allergens) consistently show that placebos work quite well to treat a large fraction of allergy sufferers. One study even found that you can give patients a placebo, tell them it’s a placebo, and it will still decrease their symptoms.

It’s worth noting that just because the placebo effect works doesn’t mean that allergies are all in your head. Or rather, even if it does mean that, that doesn’t imply allergies aren’t real or meaningful. It just means that your brain is powerful, and can tamp down symptoms just by believing it can.

I still don’t know whether I have alcohol intolerance, but I do happen to have a food allergy—kind of. I have celiac disease, which is technically an autoimmune disorder that gives me an overblown reaction to gluten proteins. Preliminary research suggests that autoimmune diseases and allergies share common pathways inside cells, so perhaps that’s my answer. Perhaps it’s not. Here’s what I do know: When I pop a Claritin before downing a glass of wine, I feel better. Maybe that’s the placebo effect—but it doesn’t hurt me, and I think it works. That’s what the placebo effect is all about.