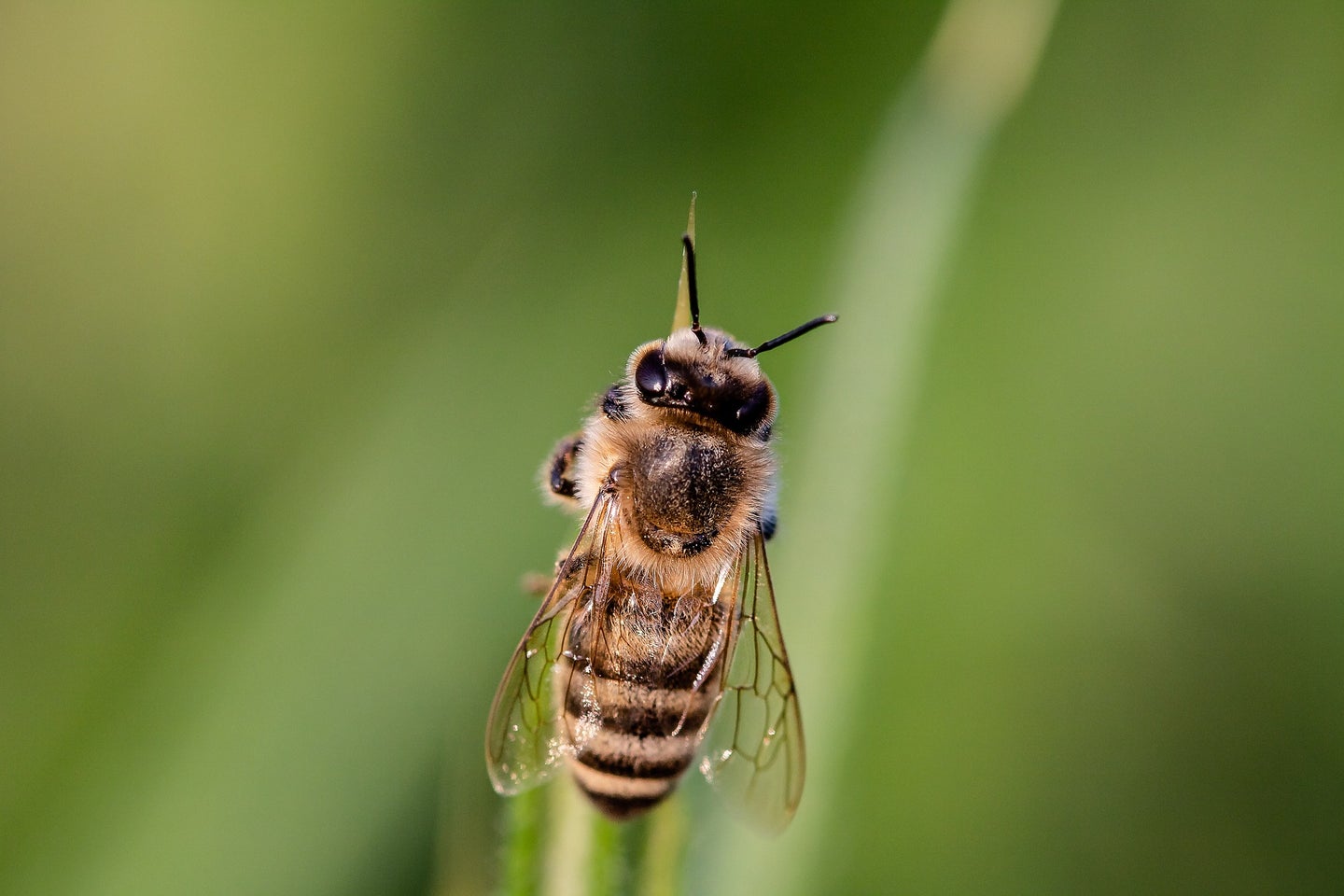 This bee may look innocent, but many bees steal from other hives. Pexels
SHARE

Fact: This skeleton was found with a knife in place of his hand

Inside Longobard cemeteries, really weird stuff can be found—people sharing tombs, jewelry, dogs, headless horses. But the strangest of all is likely the knife-armed man. Researchers who excavated the site in the 1980s and 1990s disccovered a corpse dated back to around the 6th to 8th century AD who had his right forearm amputated, healed, and replaced with a knife. The knife was likely once bound to the remaining stump with leather.

And this knife wasn’t just for show—studying the arm bones and the knife placement suggests the knife acted as his prosthetic arm, but his teeth and shoulders showed some serious wear and tear from what likely was the act of tightening up his knife stump with his teeth. When it comes to his shoulders, he developed a C-shaped ridge of bone from holding the shoulder in an unnaturally extended position to tighten the prosthesis in his mouth, which only could’ve happened if he was up to this tightening trick pretty often.

The stump healed really well, apparently. Well enough that the man, dubbed T US 380, not only survived but lived for quite some time afterwards—he made it to around his 40s or 50s, which was middle-aged at the time. So not only is the knife armed man a badass, but also a sign that communities have been caring for their disabled members for a really long time.

Fact: The government wanted to create a gay bomb

So in 2007, the Ig Nobel Awards—which is a satirical take on the Nobel Prize that highlights research that “makes you laugh, then makes you think—honored a few real heavy hitters. The prize for Medicine went to research we actually talked about on a previous episode of Weirdest Thing, where scientists used sword swallowing to better understand gastrointestinal stuff. Physics honored several studies on how sheets become wrinkled. A Japanese chemist won for her work on extracting vanilla flavoring from cow dung, which isn’t too gross if you remember, from a previous Weirdest Thing episode, that the best natural source of the stuff is beaver anal glands.

But today we’re talking about the 2007 Ig Nobel Peace Prize, which went to The Air Force Wright Laboratory in Dayton, Ohio for their efforts to develop a chemical weapon capable of making enemy soldiers suddenly irresistible to one another. In short, they tried to make a gay bomb. According to reports of the award ceremony, no one showed up to accept the honor—probably because their research was meant to be a secret.

Unfortunately, the group responsible for uncovering the existence of the so-called gay bomb is now defunct. The Sunshine Project was an NGO based in the US and Germany that formed in 2000 to expose research on biological and chemical warfare using the Freedom of Information Act. According to the website, which you can still access using the Wayback Machine, the group suspended its operations in February 2008 due to a lack of funding.

Now, many so-called non-lethal weapons are absolutely horrifying, which is why the folks behind the Sunshine Project found their development so concerning. Weapons that maim and disfigure people are often classified as non-lethal or less-lethal. But that doesn’t mean that some of the military’s ideas, especially the ones that never actually took off, can’t inspire at least a bit of a chuckle. And people chuckled quite a bit in 2005, when the Sunshine Project released a 1994 memo from The Air Force Wright Laboratory called “Harassing, Annoying, and ‘bad guy’ Identifying Chemicals.”

This paper was basically just a list of spitball ideas—an attempt to create broad categories of chemical weapons that might be worth investigating further. Just to make this abundantly clear: They didn’t have chemicals in hand that could definitely do this stuff. They were focused on listing what kind of outcome you might want a hypothetical weapon to produce, with the idea that finding the right compounds to make it happen would take funding and time. The chemists suggested, for example, that compounds designed to attract biting insects could weaken enemy defenses or even disrupt the food supply, or that certain chemicals could be used to tag so-called “bad guys” for later identification, like those exploding ink packs on clothing tags at the mall.

Most insidiously, they talked about influencing the behavior of their targets in a way that might cause confusion or damaged morale. You might make your enemy super sensitive to sunlight, for example. The chemists went on to note that a “distasteful but completely non-lethal” option would be to use “strong aphrodaisiacs, especially if the chemical also caused homosexual behavior.”

When the Sunshine Project dropped these papers in 2005, the US military came out saying that none of the proposals contained therein had ever been taken seriously. The Sunshine Project responded by producing evidence that the Joint Non-Lethal Weapons Directorate included it on a promotional CD-ROM about its work that got distributed to other US military and government agencies in the year 2000. So, just to be clear, six years after the lab wrote the memo, it was still getting passed around in official channels.
When this story went mainstream in 2007 thanks to the Ig Nobel Awards, The Guardian reported that researchers had actually asked for $7.5 million to develop the gay bomb. But that doesn’t mean it actually exists. For starters, sexual attraction is deeply complicated, and no cocktail of chemicals can simply flip a switch on someone’s orientation—let alone make them suddenly horny enough to want to get down in a war zone. As someone who just wrote a book about the history of sex, I feel completely confident that if scientists ever found a true aphrodaisiac, gay-making or otherwise, the pharmaceutical industry would slap a patent on it and market it six ways to Sunday. Until that day comes, we’ll just have to settle for viagra.

By Chelsey B. Coombs

During early spring before plants have begun blossoming and in the fall when plants are wilting away, some honey bee colonies will actually turn to robbing other, weaker colonies of their hard-earned honey stores–and even kill them in the process.

Just like a heist movie, the enemy robber bees “case the joint” to scope out their victims’ hive. They fly side to side in what’s called a “casting” pattern to look for back entrances or weak spots in the hive itself so they can sneak in and get the goods.

They’re also surveilling for the defensive bees of the hive: guards. Those specialized guard bees hang out at the hive entrance to determine whether returning bees are friends or foes based on their smell. They use their antennae to touch the returning bees, bite them and even threaten to sting by grabbing the bee with their legs or mouth and making a sting motion with their abdomens. And sometimes they even sting, killing the potential intruder and themselves. It looks like a fight in The Octagon. Bee researchers have long noted that after a robbery, the poor victims, as one would expect,  increase their defensive behaviors.

And the perps change their behaviors, too, according to a March 2021 Animal Behaviour study led by Clare Rittschof, an assistant professor of entomology at the University of Kentucky. Rittschof’s team found that after a robbing, the bully colony increases both their foraging and defense behaviors, even against their own nestmates returning from foraging.

But their increased defensiveness isn’t due to weird smells that the robbers are bringing back with them from victim hives like it was previously thought. The study looked at the brain gene expression patterns of robbing bees and found they are unusually aggressive. The returning robbers actually provoke aggression from their nestmate guards when they come back to their home hive.

And while the increased defensiveness of the guards seems like it would be bad because it increases the number of colonymates who die, it’s actually advantageous. Because the nectar conditions are so bad, which led the colony to start robbing in the first place, they’re increasing their defensiveness in case a colony comes to rob them, next.