Sadly, Adam and Eve probably didn't date each other. 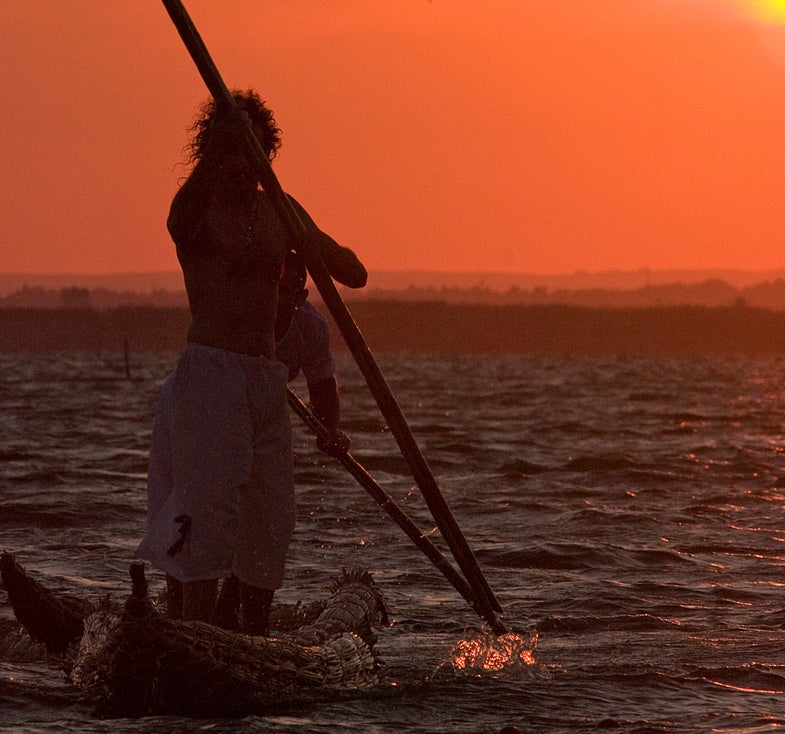 Two men go fishing the traditional way off the coast of the Italian island of Sardinia. One new study of human ancestry used the genetic diversity of Sardinian men to determine the dates of the last common male ancestor of modern humans. Photo by Gianluca Dedola
SHARE

Hundreds of thousands of years ago—when people still lived in small hunter-gatherer bands, when it’s not even clear they were totally anatomically modern (though they probably were)—something happened in the human genome.

Somewhere in Africa, a man carried a Y chromosome that would turn out to be the only surviving Y chromosome in humans today. This man lived around plenty of other people, perhaps with their own Y chromosomes, but chance whittled away his peers’ contributions until only his was left.

In a totally independent event, a woman carried mitochondria—tiny structures contained inside cells—that would become the only mitochondria people have today. Like the Y-man, she lived around other people, but over thousands of years, luck struck down all others’ mitochondria save her own.

Now, in a pair of new papers published today, two separate research groups say they’ve determined the dates during which the last common Y-chromosome ancestor lived. One of the groups also came up with dates for when the last common mitochondrial ancestor lived. The dates vary from previous estimates—and from each other—which is sure to set off healthy debates about when these seminal genetic events occurred.

As geneticists improve their understanding of these last common ancestors, the times they find may help scientists better understand when other important events in human evolution occurred, such as the spread of people from Africa. Where the archaeological record is sparse or conflicted, genetics can help, says Brenna Henn, who researches genetics and human evolution at Stony Brook University in New York. Henn was part of one of the two teams publishing today.

One of the teams, led by Paolo Francalacci of the University of Sassari in Italy, determined that everybody’s last common male ancestor lived 180,000 to 200,000 years ago. Another team, led by Carlos Bustamante of Stanford University, concluded that the modern human Y chromosome first appeared on Earth 120,000 to 156,000 years ago. Bustamante also found that modern mitochondria appeared in people beginning 99,000 to 148,000 years ago. (Henn worked with Bustamante’s team.)

Both Francalacci and Bustamante graciously say that their estimates for the Y chromosome are not that far apart from each other. Researchers not involved in their work more readily acknowledge the two’s discrepancy. “It’s not a big difference,” University of Arizona anthropologist Michael Hammer tells Popular Science. “But it is different.” Hammer has long worked on dating Y chromosomes and mitochondria.

One big advantage that Bustamante and Francalacci had was that they worked with much more of the Y chromosome than anybody had before them. Time and technology have made DNA sequencing more affordable, with lots of consequences. One of them is having much more DNA available for studies like this.

“It’s great to see large-scale sequencing being applied to the Y chromosome,” says Chris Tyler-Smith, who studies genetics and human evolution with the U.K.’s Wellcome Trust. “I think this is the future of Y chromosome study.”

Archaeologists look at unearthed ancient artifacts, while anthropologists often work with fossils to help them reconstruct prehistory. Geneticists interested in human evolution, however, have only modern DNA to look at. Francalacci, Bustamante and others like them make their last common ancestor estimates by gathering DNA samples from men and women walking around today.

These two parts of the human DNA are special because they’re the only parts that children inherit from their parents with perfect accuracy. Every other part of the DNA gets remixed and reshuffled in every new baby, which is how you can have your mom’s hair and your dad’s eyes, while your sister got Mom’s eyes, Dad’s hair and Dad’s flat ears.

The Y chromosome’s and the mitochondria’s straightforward inheritance patterns make them comparatively easy to trace through time, so geneticists often focus on them. Because the two bits had to come from a man and a woman, respectively, the people who gave all modern humans these parts of their genome are often called something like the “Y-chromosome Adam” and the “mitochondrial Eve,” which is a fun way to think about them. However, it’s vanishingly unlikely the two ever met each other and mated, and they didn’t live in an unpeopled Eden.

Now, it’s been a long time since this Adam and Eve walked the Earth, so the inheritance they left us has changed over time. Theoretically, fathers pass on their Y chromosomes with perfect accuracy to their sons, and mothers pass on their mitochondrial DNA with perfect accuracy to all their children. In reality, mistakes happen. Over time, random mutations work their way in.

Geneticists theorize that such mutations occur at a regular rate, with X number of mutations spontaneously appearing in the genome over Y number of years. So when geneticists make their estimates of last common ancestors, they take DNA samples from a large number of people, see how different those people’s DNA are from each other, and then use some outside information to help them calculate how long it should have taken for those differences to arise. “It’s basically distance equals rate times time,” says David Poznik, the Stanford University scientist who did much of the dating work in his the paper with Bustamante.

Different geneticists calculate this rate of change differently. There’s no standard way to do it. That’s why people have come up with different times for the last common Y-chromosome and mitochondrial ancestors.

Francalacci and Bustamante used a relatively new way of calculating the rate of DNA change. They used dates determined by archaeology as mile markers. Francalacci and his lab, for example, used the spread of people over the Italian island of Sardinia 7,700 years ago as their mile marker. They sampled DNA from 1,204 Sardinian men, calculated how different those men’s Y chromosomes were from each other, and then calculated the mutation rate required for Sardinian diversity to have arisen over 7,700 years. Bustamante and his colleagues did something similar with the peopling of the Americas 15,000 years ago.

Others calculate the human mutation rate in other ways, including dating from the time humans and chimpanzees branched away from each other and simply checking the mutation rate between modern parents and their children. Every researcher, of course, argues the way he or she has chosen is best; we won’t get into that. “The diversity of views and results is healthy,” Tyler-Smith says. “It’s a really exciting time in the field.”

Suffice it to say this isn’t the last word on when the Y-chromosome Adam and the mitochondrial Eve lived. Given the range in recent estimates, it’s not even necessarily true that the two folks were anatomically modern, which is kind of cool to think about. But as long as modern humans carry in them these relatively unchanged pieces of DNA, the keys are there for us to find out.