Observing a virus infecting a cell for the first time has changed the way we understand the process. 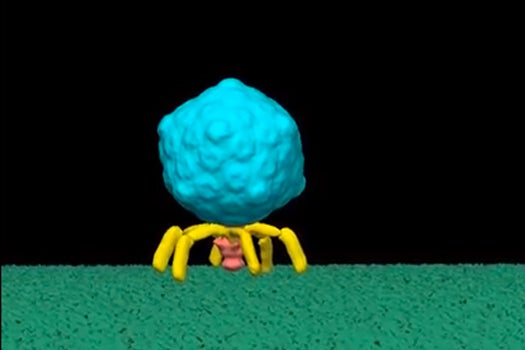 Ten years ago, Ian Molineux hypothesized that the virus T7, a bacteriophage capable of infecting bacteria like E. coli, infects a host by using an extending tail. But it wasn’t until now that he actually got to see it happen.

To view the infection process, they used genetics and cryo-electro tomography — essentially a CT scan made for objects a thousandth the diameter of a human hair — to watch as the virus inserted its genetic material into a host bacterium.

The virus, resembling a bizarre version of a golf ball on a tee, searches for the ideal location to infect its host by tottering around on fibers folded at the base of its head. When it finds a spot it likes, it hunkers down and ejects some internal proteins from its core through the host’s cell membrane, using this “tail” as a path for ejecting its viral DNA into the E. coli‘s cytoplasm. After ejection, the protein path collapses and the cell membrane reseals.

Researchers had already suggested that bacteriophages like T7 “walk” over the cell surface, yet this is the first experimental evidence to prove their hypothesis.

Other aspects of process came as a surprise. The virus structure is a little different than previously believed, with ultra-thin fibers usually bound to the head of the virus rather than always extended. These fibers, which extend like feelers as the virus makes its way around the cell surface, are in a state of dynamic equilibrium between bound and extended states.

“Although many of these details are specific to T7, the overall process completely changes our understanding of how a virus infects a cell,” Molineux says.