FYI: Could You Survive A Flight Strapped To The Wing Of A Plane?

Maybe, if you're really prepared. But it's not going to be an especially smooth flight. 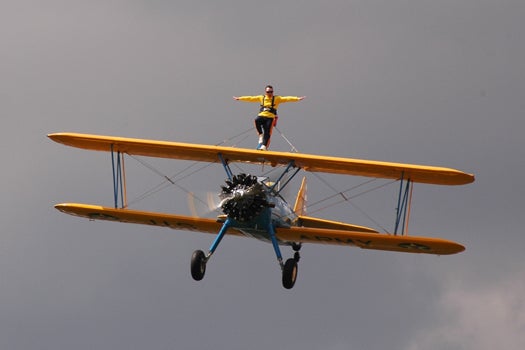 A python clinging to the wing of a commercial plane, which soared 30,000 feet in the air, died last week. The brave little guy held on from northern Australia to Papua New Guinea, but was apparently dead on arrival. Sad, but it got us thinking: Could a human in the same situation survive the trip?

Believe it or not, there’s precedent for this sort of thing, and people involved have made out better than the snake. A pilot got sucked out of an exploded window in 1990, and was left hanging on to the crew for his life. They pulled him in a few minutes later, frostbitten but alive. As for full flights, a Romanian man clinging to the landing gear from Vienna to London (750 miles) survived though he also got frostbite. And one report said a 15-year-old boy made it through a 2007 journey from Perm, Russia, to Moscow (808 miles) stowed away inside the wing of a Boeing-737, so severely frostbitten by the end that crews couldn’t remove his shoes or coat. But alive.

In every one of those cases there was a qualifier: exposure to the elements only lasted a few minutes; the flight was traveling especially close to the ground because of rough weather; it happened inside the wing, not outside. Trying to make it through a full, high-altitude flight hanging onto the outside of a wing like our friend the snake did? That’s tougher.

“The air in their lungs… would expand so quickly they would explode.”To keep this simple, we’ll talk about the scenario as though some people were somehow tossed out at 30,000 feet and landed on the wing of a 737–maybe “if someone didn’t like them,” says Jason Kring, assistant professor of human factors and systems at Embry-Riddle Aeronautical University. The first problem is obvious: there’s not a place to hang on to the exterior of a plane traveling 400 or 500 mph. But say they were strapped down to it (someone was really angry, presumably). At 30,000 feet, while trying to breathe, “the air in their lungs… would expand so quickly they would, for lack of a better term, explode,” Kring says. Boyle’s law says there’s an inverse relationship between atmospheric pressure and the volume of a gas. That doesn’t bode well for people’s lungs, which would “expand like a balloon.”

Next, there’s the problem of the cold. Traveling at that height, the temperature could be 30 degrees below zero Fahrenheit–maybe colder. (That’s not even factoring in the wind chill when zooming by at 500 mph.) That’s enough for extremities like the eyes, mouth, and nose to freeze almost instantly, Kring says.

If the unfortunate passengers took off at sea level while strapped down instead of being tossed out, they’d do a little better, but not much. They could, maybe, get up a few thousand feet before the cold and oxygen issues factored in, but definitely not to 30,000 feet.

No, what these people would need is a plan. If they were somehow strapped down un-maliciously, with help from experts, maybe they’d have a shot at making it. A pressurized suit with thermal protection and an oxygen system could keep them safe for the flight, Kring suggests. An astronaut’s suit might fit the bill: NASA suits can regulate temperature (hot or cold) by sending liquid through the system, keeping a body in homeostasis, as long as that body is safely on the wing. (Daredevil jumper Felix Baumgartner’s suit was insulated, but didn’t regulate heat through liquid the same way NASA suits do.) Theoretically, with enough oxygen in the system, people on the wing could make it from China to Mexico, Russia to South Africa, or anywhere to anywhere else.

“He might get bored and he might have other problems of using the restroom or some other factor,” Kring says. Other than that? Nice and snug.