Fractional freezing will concentrate any beer, provided you have a bit of patience and a very cold freezer. 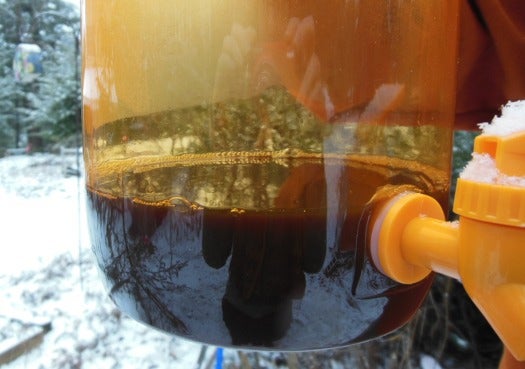 Photo of our beer after it had been sitting outdoors for over 24 hours in 24F temperatures. The alcohol content in it suppresses freezing. Martha Harbison
SHARE

Team BeerSci was marooned in The Land of Always Winter (aka New Hampshire) for the Christmas holidays. I decided to take advantage of the absurd cold (it never got above freezing) and try an experiment in beer concentration: I would freeze some of the water out of a brew and decant the now-concentrated booze into a delicious stronger tipple, a practice called fractional freezing.

The concept is simple: water (the main component of beer) has a higher solid-to-liquid phase transition temperature (aka “melting point”) than does ethanol. If one were to get beer cold enough, one could freeze some of the water in the beer — the alcohol would remain liquid — and separate the solids from the liquids. This would yield almost-pure water ice, and beer with a higher percent alcohol-by-volume (%ABV). Repeated rounds of this (under successively colder conditions) could yield a pretty potent brew. 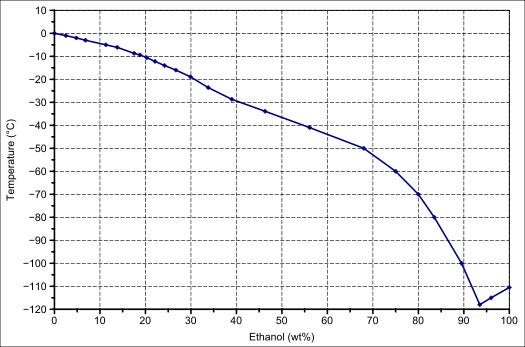 Water freezes at 0C (32F). Ethanol freezes at -114C (-173.2F). As the mole fraction of ethanol in solution increases, the freezing point of the solution decreases. Notice the dip at about 93% ABV? That’s the water-ethanol mixture eutectic point, where the solution behaves as if is not a mixture, but a single component. This eutectic mixture has a freezing point much lower than either water or ethanol in the pure state.

Fractional freezing — “jacking” in old parlance — has a long history in the United States. The beverage applejack was produced using this method by first fermenting apple juice into hard apple cider. Then barrels of this cider were left outside during the winter and the connoisseur would occasionally fish out the frozen chunks of water, leaving an ever-concentrated batch of hard alcohol behind. At some point in the 20-25 percent ABV range, the liquor would stop freezing at ambient temperatures and the booze was ready to consume as “Jersey Lightning.” It was also used as currency.

Moving into the malt-beverage world, brewers in Germany use fractional freezing to make eisbock. These brews are usually just regular bock beers, which clock in at 6 percent ABV, freeze-concentrated to something in the 13 percent ABV range. Frankly, there are probably easier ways to get high-proof beers (make a barleywine, for example) than by starting with a mid-strength one and concentrating it, but there’s a market for eisbocks and it’s possible to find them in the US as well. A more infamous set of freeze-concentrated beers was made by the Scottish brewery BrewDog in their quest to make “the strongest beer in the world.” The first was Tactical Nuclear Penguin, a beer that started with an ABV in the teens and ended at 32 percent ABV. Then a little brewing war started up between BrewDog and German brewery Schorschbräu to make ever-stronger beers. Schorschbräu made a Schorschbock at 40 percent ABV, BrewDog countered with Sink the Bismarck at 41 percent ABV. Then came another beer at 55 percent ABV (that’s 110 proof, my friends). Schorschbräu is current record-holder with Schorschbock 57, at 57 percent ABV.

No, I haven’t tried any of these beers. At some $800 a bottle, that’s just a bit too rich for my budget. I could buy a lot of regular beer for that cash.

Stormbringer — Not Quite Cold Enough

Photo of our beer after it had been sitting outdoors for over 24 hours in 24F temperatures. The alcohol content in it suppresses freezing.

Anyway, so back to our particular experiment. We took a strong ale — as it so happens, we adapted the recipe to make the Marathon Mild by tripling the amount of grains and hops in the beer — and called it Stormbringer (named after one of the Ten Who Were Taken, from Glen Cook’s Black Company books). We poured two bottles of it into a container with a spigot, and left it out of doors overnight. What we didn’t count on was an unusually “warm” night at 24°F, and so in the morning we found some very, very cold but still entirely liquid beer. Part of the problem was that Stormbringer is already 12% ABV. When I did some research, I discovered that I would need temperatures between 20°F and 15°F to get the desired freezing effects. Because that wasn’t going to happen for another two nights, I opted to throw the beer into the downstairs freezer, which was a pleasing 15°F.

And there it sat, perched atop a frozen pizza, for two hours. When we checked on it, beer slushy! So we raced upstairs, decanted the beer off the ice, and measured the volume. By our very rough calculations, we concentrated the beer from 12 percent to maaaayyyybe 15 percent or 16 percent ABV. Honestly, we could have probably concentrated it further, as 20 percent ABV has a freezing point of 15°F. But this experiment wasn’t about that, we just wanted to see if it would work and what the beer would taste like.

As it turns out, pretty damn awesome. That said, if I were to do it again, I’d purposefully brew a beer with slightly lower hop presence (not surprisingly, that also gets amplified during concentration). You know, make an all-Maris Otter barleywine and then try to concentrate it to 20 percent ABV. If one wants to go colder, feel free to opt for a different cooling medium. That freezer only made it to about 15°F/-9C. If you use the tried-and-true ice-salt mixture, you can reach -20C.

For the really enterprising, although PLEASE don’t try this at home unless you know what the hell you are doing, you can use the cold bath I used frequently in lab experiments: dry ice in isopropanol, which gets down to a brisk -77C and can freeze liquids that are 90 percent ABV. You won’t be able to go much more concentrated than that, as the mixture will form a eutectic at about 93 percent ABV. This means that the entire mixture will freeze, rather than just the water. Something similar happens during distillation, where water and ethanol form an azeotrope at about 95 percent ABV.

I don’t recommend actually trying the isopropanol/dry-ice bath chilling for a variety of reasons, one of which is that it’s probably illegal to make booze that concentrated without a license. But more importantly, -77C is dangerously cold and you could risk serious injury if it were to splash on your skin or in your eyes or in your mouth.