How do you make the perfect snowball?

The key is in the surface moisture. 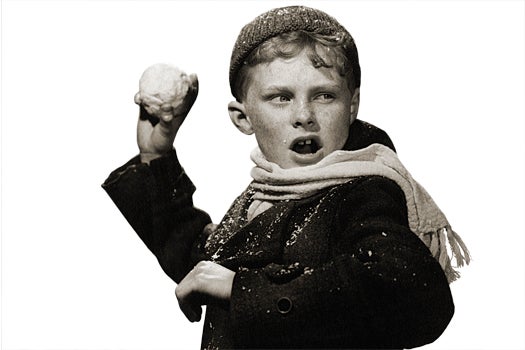 Find some snow that’s not too dry and not too wet.

Anyone who’s tried to make a snowball understands the need for snow of just the right consistency. Start with powdery snow and a ball will fall apart. Start with slushy snow and it will turn into a hunk of ice. The key, then, to a killer snowball is to find snow that’s in the perfect sticky state.

According to Jordy Hendrikx, director of the Snow and Avalanche Laboratory at Montana State University, snow at subfreezing temperatures contains no liquid water. When the grains of ice begin to melt, each one forms a wet meniscus. The menisci work as snowball glue, he says, mingling and then refreezing.

Scott Sandford, a senior astrochemist for NASA, points out that extreme pressure could also play a part in making snowballs. “If you squeeze water ice hard enough, it will melt,” he explains. Packing snow into a ball could force some of it across that pressure threshold, making it liquefy and then refreeze. To get that kind of pressure, though, you’d need to be in space or a lab. In a casual snowball fight, surface moisture is still the most important factor. So what about the old theory that bare hands make the best snowballs? “It doesn’t make any difference,” Sandford says. “You’re better off with gloves, so your hands don’t get cold and numb.”

This article was originally published in the February 2013 issue of Popular Science, under the title “FYI: How do you make the perfect snowball?”

Ask Us Anything
Life Skills