Not necessarily! The chemistry behind aging ales, wet-cardboard taste, and what you can do about it. 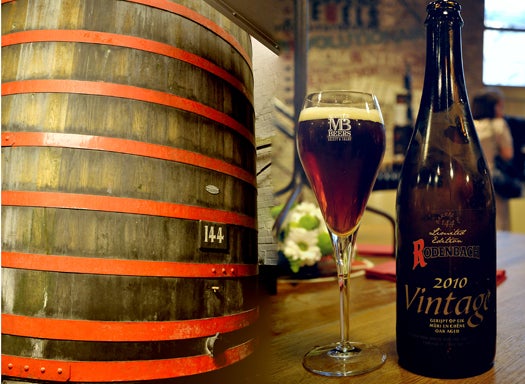 BeerSci Note: From the outset, I decided that I’d occasionally run stories by guest writers in BeerSci. After all, I’m not the only nerd on the planet who likes beer. This week’s column was pitched to a fellow PopSci editor, who passed it to me. — Martha

Beer producers make a big deal about drinking beer fresh. Stone Brewery produces an IPA with a drink-by date. Russian River Brewing Company implores their customers right on the bottle label to drink Pliny the Elder fresh. And most other beer producers print the brewing date on the can or bottle so the customer knows he or she isn’t getting old beer. While it’s true that many (and perhaps most) beers taste better when fresh, it’s a fallacy that old beer always equals bad beer. Some breweries specifically make beer that needs to be aged for ten years or longer before it tastes right.

If you’re hesitant to drink a decade-old beer, you have good reason. Oxygen is most responsible for causing beer flavors to go awry over a long period of time. Charles Bamforth, a professor of Food Science and Technology at UC Davis, explains that oxygen causes the fatty acids in the beer to oxidize and form a multitude of chemicals, including nonenal, one of the main chemicals that contribute to the wet-cardboard flavor of beer past its prime. Nonenal isn’t the only culprit though. According to Bamforth, “Tens, if not hundreds, of types of molecules will contribute to the aging process.”

Brewers have done a good job at keeping oxygen out of their bottles. They apply a vacuum to each bottle and flush it with carbon dioxide in order to remove as much oxygen as possible before filling it with beer. Yet they still have other contaminants to worry about. “Traces of iron and copper can be picked up from the beer’s raw materials or the brewing equipment and can activate oxygen species as well,” says Bamforth.

One of the best lines of defense against these bad flavors is a high alcohol content. Thomas Hardy’s Ale, at nearly 12% ABV, can be stored for 25 years before opening. The high alcohol, as well as the strong flavor components in these types of beers, mask any trace of nonenal and the other compounds that make an old beer taste stale. On American shores, Stone Brewing Co. of Escondido, CA (near San Diego) brewed their own line of aged beers: the Vertical Epic Ales.

The first in the series was released on February 2nd, 2002, or 02.02.02. Over the next decade, they continued to release beers exactly one year and one day apart, on 03.03.03, 04.04.04, all the way to 12.12.12. Greg Koch, CEO and cofounder of Stone Brewing, said that he intended for drinkers to refrain from opening them until the last entry was released, and then to sample them all together.

One of Koch’s tricks for keeping the Vertical Epic Ales’ shelf life in check? Bottle conditioning. In addition to the finished product, the filling machines added some fresh yeast and unfermented beer to each and every bottle before it was capped. “You get a second fermentation,” says Koch. “You increase carbonation and also scavenge atmospheric oxygen that got in during the bottling process. It helps with the longevity.” Not all breweries bottle-condition, but those that do (such as Sierra Nevada and Allagash) reap the benefits of a longer shelf life and better flavors.

That doesn’t mean that the beers are idiotproof. Buyers still need to store them properly. Koch recommends putting the Vertical Epic Ales in a dark room at cellar temperature, approximately 50-55 degrees Fahrenheit. “You can store them in the same conditions that you would wine bottles.”

Not all beers will benefit from aging, though. Lighter-flavored beers, such as lagers, blonde ales, and the like are generally low-alcohol brews that don’t have potent flavors to mask aging. According to Bamforth, to prevent lighter beers from smelling like “straw, hay, or tomcat urine,” drinkers should store them in the fridge at 39 degrees Fahrenheit. But the best way to avoid these awful flavors and aromas is to just drink the beer as fresh as you can. Better an empty fridge than cat-pee beer in your glass.

Jon M. Chang is a freelance science writer in Brooklyn.