Got a twitch in your eyelid, arm, or leg? Wondering where the hell it comes from and how to get rid of it? Answers within. 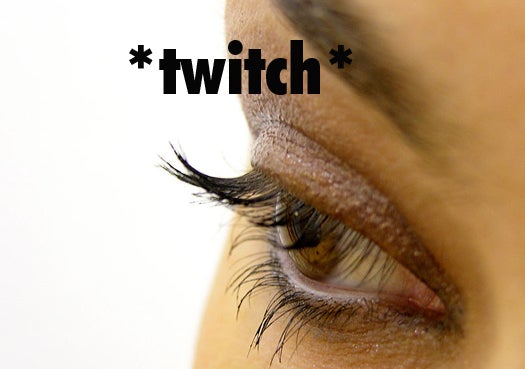 Involuntary muscle twitches are exceedingly common and yet not very well understood. “Nearly everyone experiences it,” Dr. Daniel Drachman, professor of neurology and neuroscience at Johns Hopkins University, told me. “It occurs spontaneously in well over 90 percent of people at one time or another.” Right now, as I write this sentence, it’s happening to me. My left eyelid is twitching uncontrollably. It is very annoying.

The most common type of muscle twitches are “fasciculations.” Fasciculations can occur in any muscle in the body, but, says Drachman, they tend to occur most noticeably in the limbs and the eyelids.

Why Is My Eyelid Twitching?

Fasciculations are the result of some kind of irritability of the nerve fibers. Because fasciculations are benign, they haven’t been studied particularly deeply. (But, not all involuntary muscle twitches are fasciculations–more on that later.) So we don’t really know even where in the nerve the irritation is picked up–it could be in the cell body, could be further out in the fibers, nobody really knows. It is also thought that the exact localization of the fasciculation is random, meaning that you will feel a twitch in your arm or leg or eyelid without having necessarily irritated a nerve anywhere near the place you experience the twitch.

Causes are also only loosely understood; there are certain behaviors that can trigger fasciculations, including too little sleep, too much exercise, a lack of magnesium, and the use of stimulants (especially caffeine), but no study has been able to concretely pin a cause on fasciculation. These presumed causes are correlations; adjusting your stress, magnesium, caffeine, sleep, and exercise level can help with fasciculations, but that’s not evidence of causation.

Does This Mean Anything Sinister?

Well, probably not. A study from the Mayo Clinic found that over 90 percent of people will experience benign fasciculations during their lifetimes. Fasciculations are annoying but not harmful in themselves. They also probably do not indicate any kind of more dangerous underlying disease.

However, involuntary muscle twitches are not all fasciculations, and any non-fasciculation muscle twitch is almost certainly a bad sign. Fibrillation, for example, can be confused with fasciculation, but fibrillation indicates that the surrounding muscle fibers have completely lost their nerve supply. Fibrillations are very bad news, and indicate a serious nerve disorder, like Lou Gehrig’s Disease.

Uhhh Okay I’m Scared. How Can I Tell What Kind Of Twitch I Have?

So, most twitches are benign. But there are some easy ways to tell if you’re experiencing fasciculation or fibrillation. Fasciculation, for example, is visible. Take a look in the mirror at your twitching eyelid. Can you see it twitching? That’s fasciculation. Or, you can do what Dr. Drachman recommends. “Take a bright light,” he says, “and shine it so it’s tangential over the surface of the affected body part so you can see a shadow [when it twitches].”

That’s because fasciculations involve what’s called a motor unit. Motor units consist of a motor neuron as well as the skeletal muscles that are controlled by that neuron–basically, fasciculations trigger entire (though often small) groups of muscle fibers to twitch. Fibrillation, on the other hand, affects just a single muscle fiber. So you’ll feel it, and it’ll feel pretty much like a small fasciculation, but you won’t be able to see it, and an EMG will just barely pick it up.

I’m Pretty Sure It’s Just Fasciculation. How Do I Get It To Stop?

Fasciculations may not be dangerous, but they are annoying, and can affect your ability to see or hear (depending on where they’re located). If it happens very often, you may have benign fasciculation syndrome (BFS), which pretty much just means you have fasciculations a lot. There are not really any failsafe treatments; Dr. Drachman says “there are drugs we can use–really drugs used for seizures and epilepsy that may help reduce fasciculations.” Those include gabapentin and tegretol.

Interestingly, cannabis has been suggested as a possible means to alleviate fasciculations. There have been essentially no reputable studies, but anecdotal evidence from users suggests cannabis can lower the frequency and severity of fasciculations.