Cancer Rates Around The World [Infographic]

Global patterns reveal the myth of a "disease of affluence" 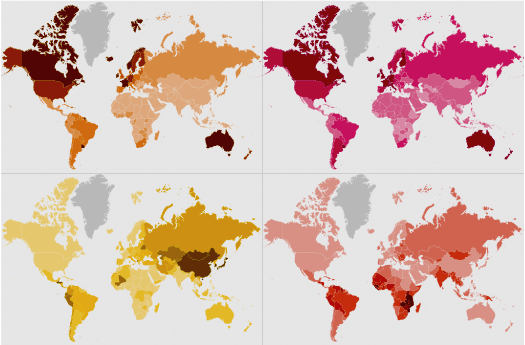 Cancer is often considered a “disease of affluence”–a malady that mostly afflicts people in the world’s wealthiest countries, often as a consequence of over-consumption–but, as today’s infographic shows, the reality is not so straightforward: In the U.S., for instance, the rate of lung cancer is 26 times higher than it is in Tanzania, but Tanzania’s rate of cervical cancer is nine times higher than that of the U.S. And in Mongolia, liver cancer is 33 times more common than in Russia, the country’s northern neighbor.

This interactive graphic show the global footprints of the six most common types of cancer. The stark geographic patterns reveal both the role of lifestyle and the power of preventive measures, as well as the places where those measures remain out of reach: