What Does Cancer Smell Like? New Devices Diagnose Patients By Scent

Researchers have reported several new tests designed to diagnose disease from the smell of a person's breath or skin. 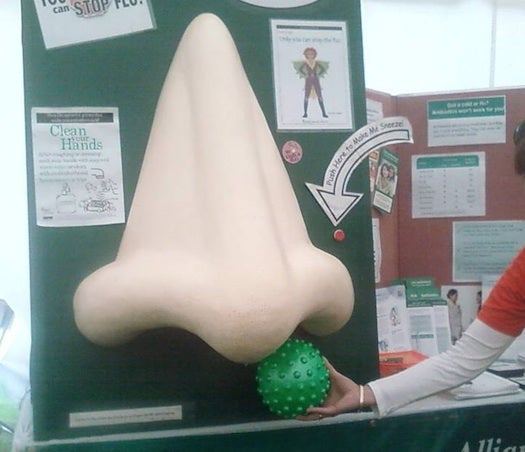 From the acetone breath of untreated diabetics to the cancer compounds that dogs can be trained to sniff—there are several human illnesses that seem to make and release distinctive molecules into the air.

Researchers around the world are working on different devices that are able to capture those smells and use them for earlier or less invasive diagnoses. The Quad-City Times, an Iowa-based newspaper, recently rounded up some of the most recent research in the field.

There’s an experimental device, from researchers in Philadelphia, that sniffs out melanoma from the air around the skin. There are chemical sensors for acetone, a first step toward a breathalyzer for diabetes. Check out the Times for more examples and details.

No smell tests are currently standard for diagnoses, although reviewers think they’re promising for the future. Most likely that means some kind of “sniffing” device, rather than a dog—even though they’ve been reliably trained to diagnose certain diseases. It takes a lot of time to find and train dogs for this work. Not every dog makes the cut, and fully trained animals are expensive. Plus, a dog can’t tell you an exact measurement, the way a digital device could.

Challenges researchers still have to work on include getting devices to detect tiny amounts of telltale chemicals and establishing that certain chemicals really do tell you about the stage of a disease.