The clamshell-shaped machine made of DNA is the first to work with a mission in mind. 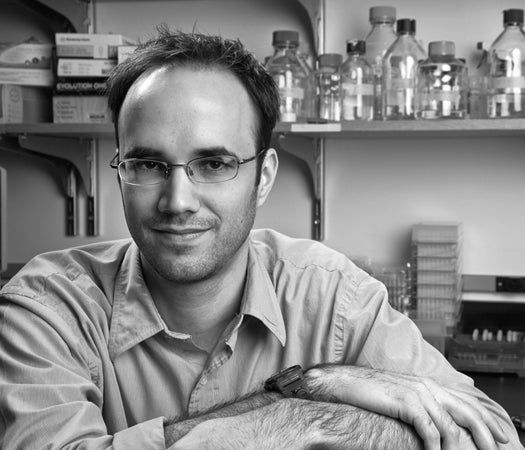 Shawn Douglas grew up building R/C cars and planes, using skills he picked up from his repairman father. Two decades later, he’s still assembling machines—only they’re now a billionth the size, made from DNA, and designed to destroy cancer cells.

Other labs have worked with DNA to build distinct shapes—a process colloquially known as DNA origami—but most have produced nonfunctional objects. At the University of California at San Francisco, Douglas folds his to have a mission. “He is the first to have realized the dream of a truly programmable container for delivering therapies to cells in a targeted way,” says Paul Rothemund, a biochemical engineer at Caltech.

Shawn Douglas
Age 31
University of California at San FranciscoDouglas’s nanomachine looks like a clamshell, its halves clasped together by two sets of entwined double-stranded DNA and its interior filled with antibodies or drug molecules. When the DNA binds to proteins on target cells, such as cancer, the two double strands unzip and the clamshell swings open to unleash its cargo. Such targeted drug treatment would require lower doses of disease-killing chemicals—and thus produce fewer unpleasant side effects.

Douglas hopes nanotechnology will attract new generations of tinkerers. “I want to get college students to come with new ideas and do all sorts of exciting stuff,” he says. Last year, he launched BioMod, a competition in which students build their own nanomachines. So far 25 teams have already signed up.

Editors Note: Shawn Douglas did his pioneering work in DNA nanomachines while at the Wyss Institute for Biologically Inspired Engineering at Harvard University. Additionally, BioMod, the competition Douglas started, is still managed by the Wyss Institute. He has since moved to University of California at San Francisco.