Despite the ethical and political differences they incite, stem cells are still a miraculous medicine, potentially able to change into... 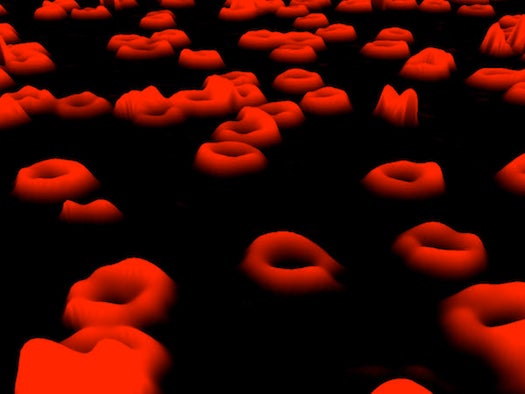 Despite the ethical and political differences they incite, stem cells are still a miraculous medicine, potentially able to change into whatever a sick body needs them to be. If we could get around the controversies behind them, theoretically, the problems would be gone. Johns Hopkins scientists are making progress there, creating them from a non-controversial supply of something we have in bulk: adult red blood cells. Correction: white blood cells.

It’s not impossible for us to turn white blood cells into stem cells already: Viruses can be harnessed to set the clock back on the cells by delivering genes to them, but that can come with complications, like mutated genes or cancer. Instead, this technique (just published in PLoS One uses plasmids, DNA rings that replicate inside cells, then degrade. By jolting the cells with an electrical pulse, researchers created tiny holes holes in the cells that the plasmids could slip through. The plasmids then inserted genes that cause the white blood cells to change to induced-pluripotent stem cells, or iPS–embryonic-like cells that act as if they were part of a 6-day-old embryo. Unlike other processes, the cells were also introduced into a simulated version of the bone marrow environment they’re usually in.

Early reports from the researchers say it’s been successful. Usually, scientists might be able to eke out a handful of usable stem cells out of hundreds. The Johns Hopkins team has reported that their process can make up to 50 or 60 percent of them usable, without introducing viruses.

But the next step for the researchers is the important test: checking the sturdiness of the cells by seeing what they can develop into after the stem cell phase.

[PLoS One via Medical Xpress]

Correction: An earlier version of this article incorrectly identified the cells as red blood cells; they are a type of white cell.