With Electrodes Implanted In The Retina, Blind Patient Can Read

The patient didn't touch a thing, but could read Braille letters downloaded into his brain. 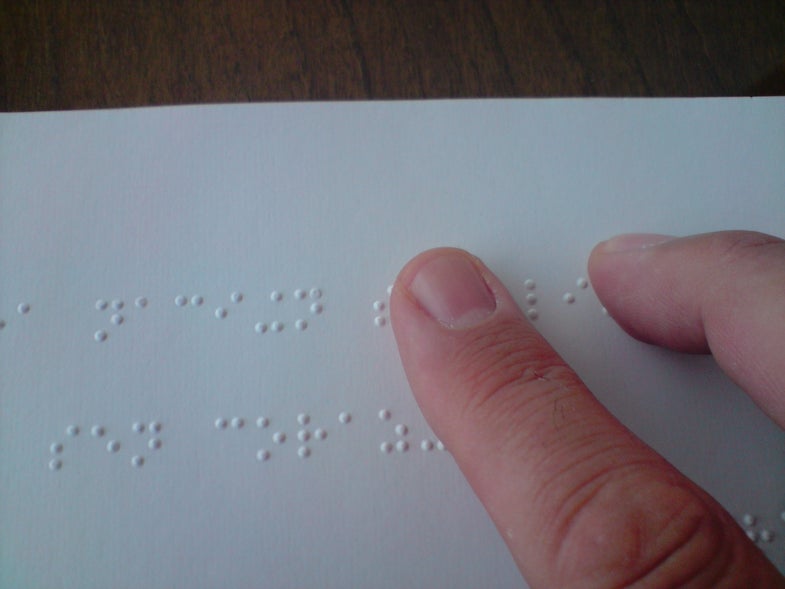 A new eye prosthetic can download electrical data right into a blind person’s retina, bypassing a camera and placing digital information right onto the nerve cells. A blind patient who used the device could read Braille patterns in less than a second, according to Swiss researchers.

The study used an ocular prosthetic called the Argus II, which is approved for commercial use in Europe and has been implanted into about 50 people, according to researchers at the Swiss Federal Institute of Technology in Lausanne. The implant uses a glasses-mounted camera, a wearable computer processor to translate camera data into electrical pulses, and a grid of 60 electrodes implanted directly onto the retina. The device uses the camera to collect visual info and translates it into signals the retina can interpret. It’s basically the same technique as a more familiar cochlear implant, which sends electrical pulses into the auditory nerves so that deaf people can hear.

In this new study, the researchers didn’t use the camera. Instead, they used the electrodes to stimulate patterns of activity onto the retina. They narrowed the experiment down to six out of the 60 electrodes and pulsed them to create visual approximations of individual Braille letters. Instead of feeling raised dots with his fingers, the patient perceived the letters with his retina.

More work needs to be done to refine the device, but the researchers think it could work as a “sensory substitute” for reading written language. Their paper is published in Frontiers In Neuroprosthetics.