Life Abhors Arsenic, Even In Extremis

Another study casts doubt on the famous arsenic-life findings, showing the bacterium actually grabs phosphorus wherever it can be found. 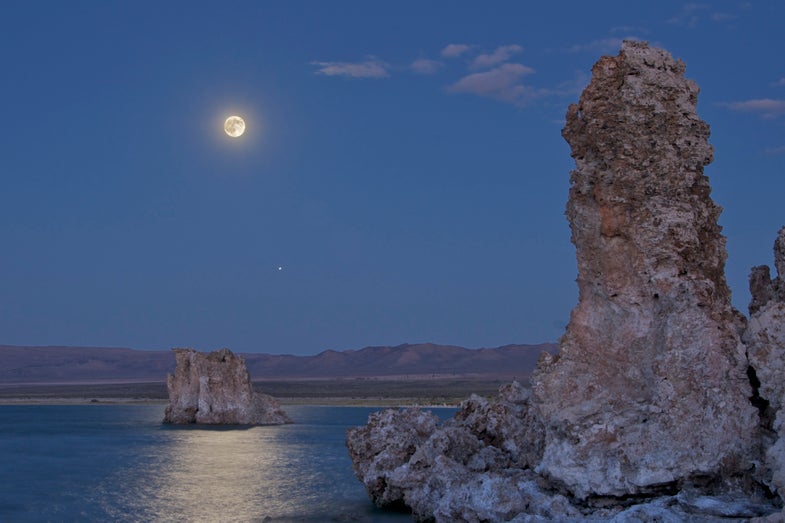 Sunrise at Mono Lake in eastern California, bounded to the west by the Sierra Nevada Mountains. This ancient alkaline lake is known for unusual tufa formations rising from the water's surface, as well as for its hypersalinity and high concentrations of arsenic. via Science/© 2010 Henry Bortman
SHARE

An exquisitely detailed chemical structure enables microbes to selectively choose beneficial phosphorus over its poisonous cousin, arsenic, even when the dangerous chemical far outweighs the essential one. A unique method of chemical bonding helps the bacteria’s phosphate-binding proteins sniff out phosphorus, according to researchers in Israel, France and Switzerland. It’s yet another in a string of papers responding to a claim that bacteria could subsist on arsenic.

In late 2010, NASA announced that a newly studied strain of bacteria from an arsenic-rich California lake could swap arsenic for phosphorus in its DNA, ATP and other biomolecules. It was swiftly criticized for a variety of reasons, primarily because life has never been shown to survive without phosphorus. Felisa Wolfe-Simon, the lead author on that now-infamous study, maintained that the bacteria — called GFAJ-1 — did just that, surviving with arsenic as a phosphorus substitute.

In the following two years, several papers have been published that cast doubt on the original findings. But it was never clear how bacteria would be able to tell the nearly identical molecules apart. Mikael Elias and Alon Wellner of the Weizmann Institute of Science in Israel aimed to figure this out.

They studied periplasmic phosphate-binding proteins, which are involved in the uptake of phosphorus into bacterial cells. They studied an analog of GFAJ-1 in the lab and figured out that it, along with several other bacterial strains, is capable of discerning what is phosphate and what is arsenate, selectively binding to the phosphate. Their PBPs can detect the very tiny — just 4 percent — difference in the thermochemical radius between the two molecules, thanks to reactions imposed on hydrogen bonds in the protein. The full paper explains in more detail here.

“PBPs therefore seem to have evolved a unique mode of binding that is capable of distinguishing between the highly similar phosphate and arsenate,” the authors write.

It appears that many microbes can do this, but GFAJ-1 can really do it, extracting phosphate at arsenate-to-phosphate ratios that are more than 3,000-fold higher than those observed in Mono Lake, where it was found. This reaction to evolutionary pressure suggests that the subtlest of biochemical changes can make the difference. The authors acknowledge that the origin of this high phosphate selectivity remains unknown.

For her part, Wolfe-Simon said the results represent the type of “careful and interesting studies that aid the community.”

“They have helped us understand molecular level discrimination between arsenate and phosphate in GFAJ-1 and other microbes. We agree, the ecological connection and differences in phylogenetic relationships between the two PBP was quite interesting,” she said in an email to PopSci.

But she said the study, like others before it, still does not address the question raised by her work: that of intracellular arsenate. “We are excited to see these and other studies continuing to answer questions regarding phosphate and arsenate, notably where in the cell the arsenate resides,” she wrote.

The paper appears in an early online edition of Nature.