A Fingerprint Scanner That Can Capture Prints From 20 Feet Away

Opening doors with the wave of a hand 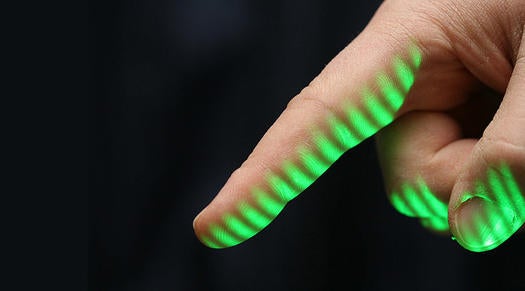 Gaining access to your gym or office building could soon be as simple as waving a hand at the front door. A Hunsville, Ala.-based company called IDair is developing a system that can scan and identify a fingerprint from nearly 20 feet away. Coupled with other biometrics, it could soon allow security systems to grant or deny access from a distance, without requiring users to stop and scan a fingerprint, swipe an ID card, or otherwise lose a moment dealing with technology.

Currently IDair’s primary customer is the military, but the startup wants to open up commercially to any business or enterprise that wants to put a layer of security between its facilities and the larger world. A gym chain is already beta testing the system (no more using your roommate’s gym ID to get in a free workout), and IDair’s founder says that at some point his technology could enable purchases to be made biometrically, using fingerprints and irises as unique identifiers rather than credit card numbers and data embedded in magnetic strips or RFID chips.

The technology works much in the same way satellites process terrain imagery, using a lot of edge detection and image sharpening to turn a fingerprint captured at a distance into a usable and identifiable image. Since users don’t have to touch a fingerprint scanner, there’s no problem with the imaging surface becoming fouled. And of course, additional layers of security like facial recognition can be piled on to make up a more robust, complete biometric profile of a person that provides that individual with access without the need for a key or passcode, either of which can be lost, stolen, or shared without authorization.

Naturally, all this recording of biometric data raises privacy concerns (our shared, technology-heavy, data-centric future seems to be riddled with those). But it also raises the prospect of better, more robust security systems as well as a certain ease of use that is appealing. As long as we’re going to have billboards that tailor ads to you by mining your biometric profile (or your wallet) for clues about your demographic profile, we might as well get some extra security out of the deal. And IDair’s system is fairly affordable: a basic one-fingerprint scanner starts at less than $2,000.