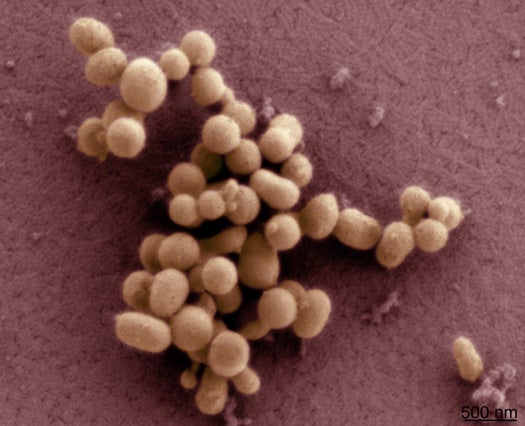 If figuring out how to quickly sequence genomes was but the first small step for genetics, Craig Venter has gone ahead and made a giant leap for the discipline. The J. Craig Venter Institute announced today that it has created the world’s first synthetic cell, boasting a completely synthetic chromosome produced by a machine.

“This is the first self-replicating species we’ve had on the planet whose parent is a computer,” Venter said in a press conference.

The biological breakthrough could have myriad applications, as it essentially opens the door to engineered biology that is completely manipulated by laboratory scientists. The researchers are already planning to create a specially engineered algae designed to trap carbon dioxide and convert it to biofuel. Other applications could include medicine, environmental cleanup, and energy production.

Though a bacteria cell was the final product in this particular experiment, eukaryotic yeast was a critical player in the process. Venter and company synthesized the genome of the bacterium M. mycoides by taking short strains of DNA (contemporary machines can only assemble short sequences at a time) and inserting them into yeast, whose enzymes have a keen ability to repair DNA and combine the short strains together.

The yeast first linked the shorter snippets (just over 1,000 base pairs each) together into longer 10,000 base pair strands. The longer strands were removed, further combined in groups of ten and put back into yeast to connect 100,000 base pair strands. After three rounds of this, the team had produced the full genome, stretching more than a million base pairs. To distinguish their synthetic genome from those found in nature, special “watermark” sequences were added to the DNA so that it won’t be mistaken for a natural species.

The synthetic genome was then transplanted into another type of bacteria, Mycoplasma capricolum, where the synthetic genome started producing new proteins. The capricolum’s original genome was either destroyed by M. mycoides’ enzymes or lost during cell replication. Either way, as the cells multiplied, cells were produced borne solely of the synthesized genome and there it was in the petri dish: the world’s first synthetic cells built from wholly synthesized DNA. 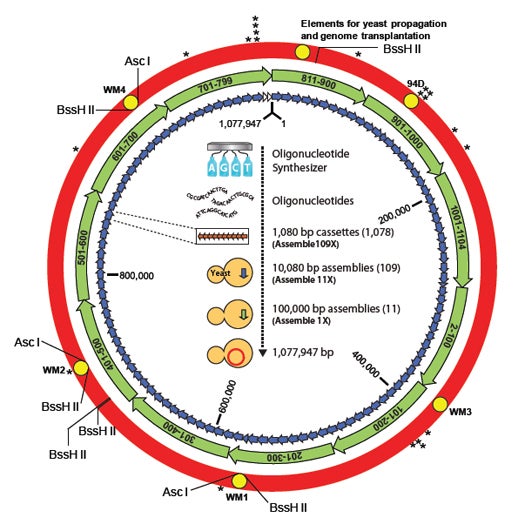 How to Build a Synthetic M. Mycoides Cell

Not everyone is thrilled with the achievement, however. Upon the announcement, some researchers questioned the validity of the term “synthetic cell” because though the genome was fabricated by computer, the process merely modified existing life rather than created it from scratch. There are also plenty ethical – and legal – ramifications to such a technological advance that will no doubt be argued in coming months.

What is not up for dispute is that Venter and company have carried out a serious technological feat in stringing together a million nucleotide base pairs to create a complete genome in the lab. Not only that, but they did it accurately enough that the cell accepted the DNA.

“Probably 99% of our experiments have failed,” Venter said of the decades-long journey to this point. “This was a debugging, problem solving process from the beginning, because there was no recipe.”

Now that there’s a recipe, Venter and company want to get cooking. Having strung 1 million base pairs into a coherent genome, Venter said the next step is algae, as algal genomes generally contain just under 2 million base pairs. By comparison, the human genome contains more than 3 billion pairs, so don’t look for synthetic mammals any time soon.