It’s perfectly understandable why commercial shipping vessels are prohibited from carrying arms in international waters. But when it comes to... 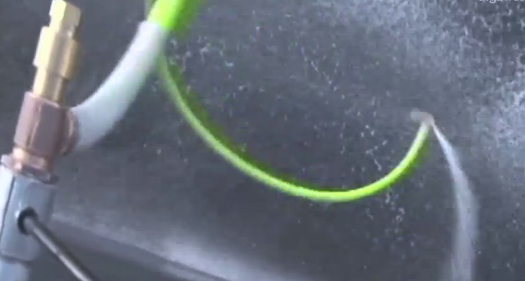 It’s perfectly understandable why commercial shipping vessels are prohibited from carrying arms in international waters. But when it comes to dealing with the threat of piracy, battles that pit water hoses against small arms and RPGs are decidedly one sided. So Japanese companies MTI and Yokoi have teamed to create what they call the “Anti-Piracy Curtain,” a system that makes it difficult–and quite intimidating–for anyone to board a ship without the consent of a crew.

The curtain is a two-pronged anti-piracy attack aimed that aims to make it prohibitively difficult for pirates to pull up alongside a shipping vessel and board it using ladders, the typical method of operation for pirates operating in places like the Horn of Africa. Using the ship’s onboard firefighting water pump system, the first countermeasure dumps huge amounts of water off the side of the ship via high-volume nozzles, which soaks anyone below and would fill a pirate skiff with water at a rate of about a centimeter per second, eventually causing the boat to sink or capsize.

The second and more intimidating prong of this forked attack involves the deploying of high pressure hoses down the sides of the ship. Each hose is attached to a sinker weight that keeps the nozzle down near the water’s surface, and the restrictive nozzle at the end ensures that the water coming out does so at high-pressure. The result: a long hose belching a stream of stinging high-pressure water while lashing about violently. Several of these deployed down the side of a ship make it difficult to put a ladder up the side of the vessel, much less to climb aboard the ship.