“Our .50-caliber bullet can guide itself to a hit half a mile away” 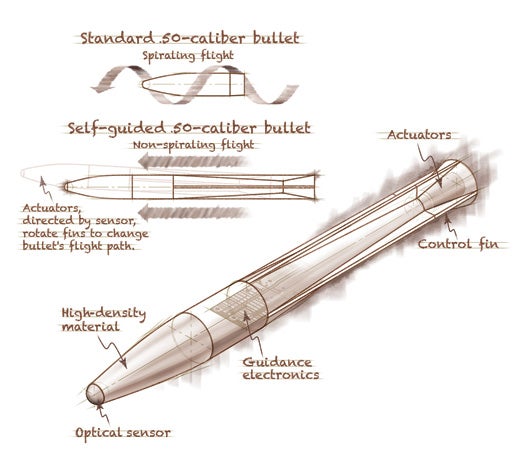 For years, people have tried to come up with ways to steer bullets, and everyone has consistently said you can’t do it. And you couldn’t—if the bullet was spinning. A spinning bullet is too stable; you can’t apply enough force to turn it off its axis of revolution. The secret sauce is that our bullet doesn’t spin. It’s kind of like a musket ball, which doesn’t rotate, but with technology added to let us control where it goes.

The .50-caliber bullet has an optical sensor in the nose that looks for a laser dot on a target. A battery-powered 8-bit processor uses a simple control algorithm to steer the projectile, adjusting its direction 30 times per second. Motors rotate four tiny fins to change their angles. The bullet is heavy toward the tip, like a dart, so it’s aerodynamically stable and can fly straight.

Our computer models show that the bullet can improve a shooter’s accuracy by 90 percent. Wind and other environmental factors can push a bullet off course by 30 feet. According to our simulations, in the same circumstances our projectile gets within inches, which could require fewer rounds and minimize collateral damage. The bullet could be loaded in a standard cartridge and shot from a regular firearm with a smooth-bore barrel so it doesn’t spin. We’ve fired some representative electronics in a mockup cartridge, and they withstood the launch. The next step is to find funding to build a full prototype.

—Larry Shipers is a mechanical engineer who oversaw the self-guided-bullet project at Sandia National Laboratories.