How It Works: The Endoscope Camera in a Pill

The tiniest endoscope yet takes 30 two-megapixel images per second and offloads them wirelessly. See how it works inside the body in an animation 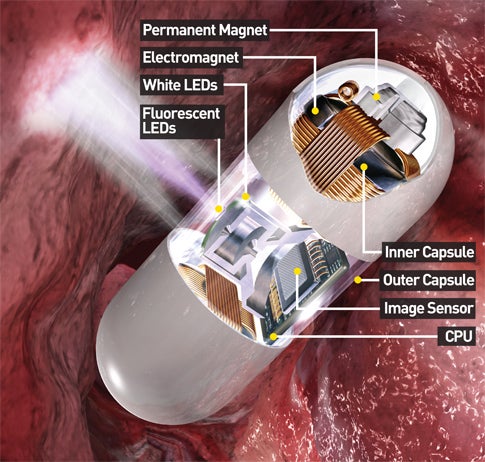 Pop this pill, and eight hours later, doctors can examine a high-resolution video of your intestines for tumors and other problems, thanks to a new spinning camera that captures images in 360 degrees. Developed by the Japanese RF System Lab, the Sayaka endoscope capsule enters clinical trials in the U.S. this month.

How the Pill Films Your Innards 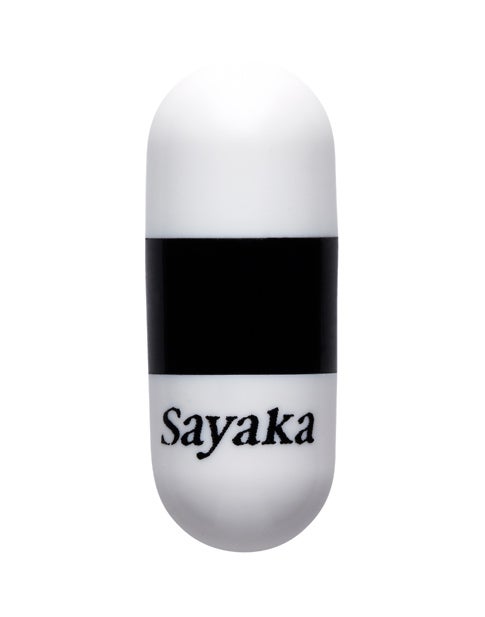 The Sayaka is 40 percent smaller than previous endoscope cameras

Down the Hatch
The patient gulps down the capsule, and the digestive process begins. Over the next eight hours, the pill travels passively down the esophagus and through roughly 20 to 25 feet of intestines, where it will capture up to 870,000 images. The patient feels nothing.

Power Up
The Sayaka doesn’t need a motor to move through your gut, but it does require 50 milliwatts to run its camera, lights and computer. Batteries would be too bulky, so the cam draws its power through induction charging. A vest worn by the patient contains a coil that continuously transmits power.

Start Snapping
When it reaches the intestines, the Sayaka cam begins capturing 30 two-megapixel images per second (twice the resolution of other pill cams). Fluorescent and white LEDs in the pill illuminate the tissue walls.

Spin For Close-Ups
Previous pill cameras place the camera at one end, facing forward, so the tissue walls are visible only in the periphery of their photos. Sayaka is the first that gets a clearer picture by mounting the camera facing the side and spinning 360 degrees so that it shoots directly at the tissue walls. As the outer capsule travels through the gut, an electromagnet inside the pill reverses its polarity. This causes a permanent magnet to turn the inner capsule and the image sensor 60 degrees every two seconds. It completes a full swing every 12 seconds—plenty of time for repeated close-ups, since the capsule takes about two minutes to travel one inch.

Offload Data
Instead of storing each two-megapixel image internally, Sayaka continually transmits shots wirelessly to an antenna in the vest, where they are saved to a standard SD memory card.

Deliver Video
Doctors pop the SD card into a PC, and software compiles thousands of overlapping images into a flat map of the intestines that can be as large as 1,175 megapixels. Doctors can replay the ride as video and magnify a problem area up to 75-fold to study details.

Leave the Body
At around $100, the cam is disposable, so patients can simply flush it away.