Researchers at Georgia Tech have found that a little vibration goes a long way toward upping a person’s sense of... 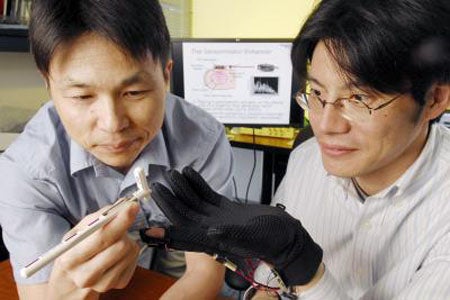 Researchers at Georgia Tech have found that a little vibration goes a long way toward upping a person’s sense of touch. Using a glove of their own design, they’ve found that they can heighten tactile sensitivity by applying a small, high-frequency vibration to the side of the fingertip.

The glove is based on the notion of stochastic resonance–the adding of a little white noise to a sensory experience which has shown in previous tests to actually heighten the sense being challenged. But while this has been previously demonstrated in sight, hearing, touch, balance, etc., no one has ever built a wearable device that takes advantage of the stochastic resonance sensory advantage.

The glove contains an actuator made of lead zirconate layers stacked one upon the other to generate the kind of high-frequency vibration needed. The actuator makes contact at the side of the fingertip, so the palm side of the finger remains free to touch and manipulate objects.

In a quick trial using ten adult volunteers performing basic sensory tests like grasping and texture discrimination, the researchers logged statistically significant improvements in the subjects’ senses of touch across all tasks. The degree of improvement varied by test, but all tests showed at least some kind of heightened sensory experience.

The drawbacks: each person’s vibration amplitude threshold–determined in this case for each subject by earlier testing–is different. So making a device that works optimally for all people is a particular challenge. Some people get a maximum tactile boost from vibrations at 75 percent of their thresholds, others from 100 percent, and so on.

As such, the team is now working to zero in on an optimal amplitude and frequency that would work best across the board. They also are also working out the effects of long-term exposure to vibrations (no one wants to find their sense of touch heightened when wearing the glove only to learn that it has muted his or her sense of touch when not wearing the glove). The team hopes to eventually develop a wearable tactile enhancer that can help people with peripheral nerve damage or those whose jobs require a very delicate dexterity.