Skin guns. Organ printers. Pig dust. Biochemist Alan Russell believes tools like these could one day be standard-issue for the battlefield medic. The skin gun would heal burns. The organ printer would replace badly wounded livers, kidneys, even hearts. And the pig dust? That could help regrow body parts for the estimated 1,000 veterans who have come home from Iraq and Afghanistan missing them. It’s all part of the vision of the $250-million Armed Forces Institute of Regenerative Medicine (AFIRM), a consortium of 30 research institutions established in March by the U.S. Department of Defense. Russell, who directs the University of Pittsburgh’s McGowan Institute for Regenerative Medicine, will help lead AFIRM’s efforts to develop therapies for the regeneration of bones, muscles, tendons, nerves and blood vessels, as a way to heal wounded soldiers faster and more effectively than with conventional treatments.

The idea of regrowing limbs sounds “kind of Star Trek-y,” Russell admits, but he says that it’s within the grasp of science. He points to his colleague at McGowan, Stephen Badylak, a pathologist and fellow AFIRM researcher, who shocked the medical world last year when he reported that a powder culled from pig bladders helped resprout the severed fingertips of two patients in their 60s. Normally, when a person loses a limb, scar tissue forms over the wound, leaving a permanent stub. The pig powder contains signaling molecules that attract cells and proteins known as growth factors and override the scarring process, telling the cells to grow instead. (Badylak settled on pigs because their molecules are similar to those found in humans and easy to obtain.) The pig dust was so effective that, with just a light dusting every other day for two weeks, the fingertips grew back entirely—fingernails and all—six weeks later, Badylak reported. For already scarred-over limbs, researchers have developed an enzyme that eats away scar tissue so they can dust the healthy cells below. With AFIRM’s backing, Badylak next hopes to figure out how to stimulate the growth of more complicated muscle tissues found in arms and legs. 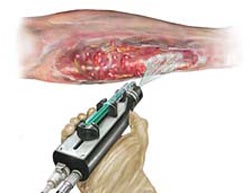 AFIRM won’t stop at salamander-like limb regeneration. For injuries to organs, Wake Forest University tissue engineer and AFIRM researcher Anthony Atala (who nabbed this magazine’s 2006 Best of What’s New Grand Award for his artificial bladder) is building an inkjet printer capable of creating an entire organ on demand. The device uses cartridges filled with cells from various types of tissue, along with a mix of growth factors and special nutrients, to “print” organs layer upon layer. The printer has so far managed structures as complex as a rudimentary rat heart. Within the next five years, Atala aims to build a portable version for the battlefield that will print layers of skin tissue directly onto deep flesh wounds. For surface wounds, such as burns, the consortium is developing a handheld spritzer that sprays a thin layer of immature skin cells over the wound. These cells, called keratinocytes, are extracted from the patient’s skin and stimulate healing in the wound. In a recent clinical test of the gun on 16 burn patients, all showed “excellent healing” after one to three weeks. The conventional approach of grafting, in comparison, takes just as long but requires three times as much skin and often results in patchwork scarring.

The Pentagon’s five-year investment in these and other regenerative techniques is based on military needs, but the end goal is to help soldiers and civilians alike. “Conventional medicine cannot return people to the way they were before,” Russell says. For amputees, “readjusting to a new reality is not acceptable.”