This ersatz lung, no bigger than a multivitamin, could represent a new pharmaceutical testing method. On it, researchers have created... 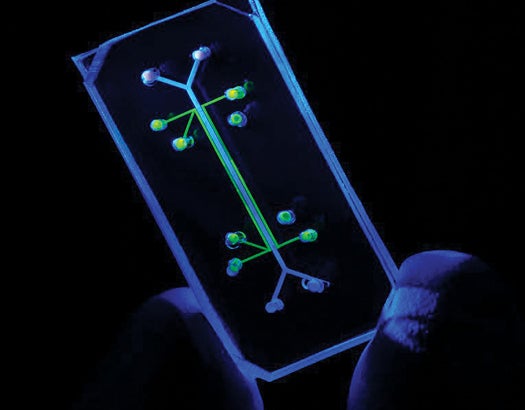 A "lung-on-a-chip" microdevice for drug and toxin testing recapitulates organ-level functions and breathing movements of the human lung. Fluorescent dyes have been perfused through linear microengineered channels that carry air to lung air sac cells, culture medium to blood capillary cells, and vacuum to drive breathing movements. This image relates to an article that appeared in the June 25, 2010, issue of Science, published by AAAS. The study, by Dr. Dan Huh of the Wyss Institute for Biologically Inspired Engineering at Harvard University in Boston, Mass., and colleagues, is titled, "Reconstituting Organ-Level Lung Functions on a Chip.".
SHARE

This ersatz lung, no bigger than a multivitamin, could represent a new pharmaceutical testing method. On it, researchers have created an artificial alveolus, one of the sacs in the lungs where oxygen crosses a membrane to enter the body’s blood vessels. A polymer sheet that stands in for the membrane is in the blue strip. On one side of the sheet, blood-vessel cells mimic a capillary wall; on the other, lung-cancer cells mimic lung epithelial cells.

Scientists have tested the chip’s immune response, and it behaves just like real tissue would, a first step to having lifelike organ systems on which drugs can act. The chip’s primary developer, biomedical engineer Dongeun (Dan) Huh of Harvard University, hopes that within two years, the chip will succeed in mimicking the process by which the lungs swap oxygen for carbon dioxide. Huh would like to create a suite of artificial organs to be used in cosmetics testing and pharmaceutical safety trials.