The jury is still out, but skepticism permeates the scientific community 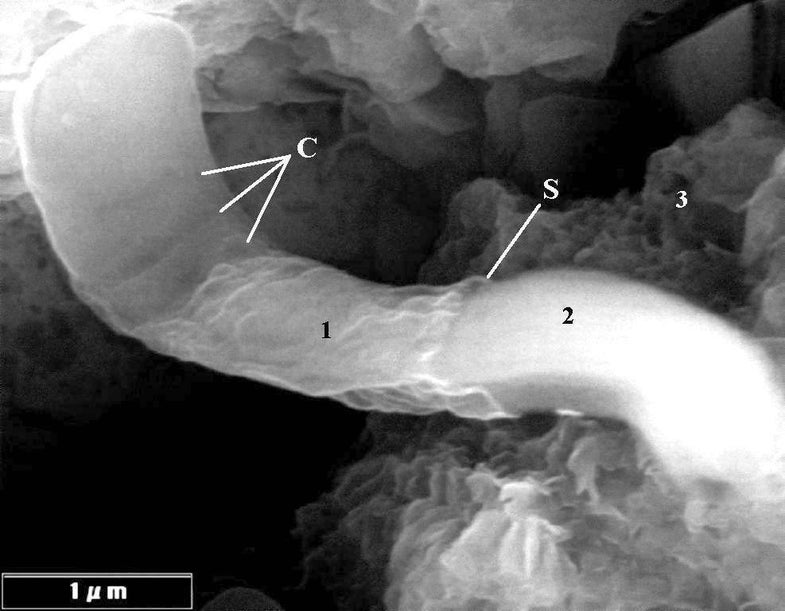 Did a NASA scientist find fossilized alien microbes embedded in a 146-year-old meteorite? As this claim emerged over the weekend, the answer from the scientific community so far appears to be something between “Um, what?” and “No.”

Saturday afternoon, the Journal of Cosmology, which has made a name for itself by publishing provocative papers about controversial topics, sent out a mass press release announcing a new paper by the award-winning astrobiologist Richard Hoover, who studies extremophiles at NASA’s Marshall Space Flight Center. He described filaments and other structures inside a rare type of meteorite that look like some unknown form of cyanobacteria.

As several others have pointed out, this is not the first time Hoover has made this claim, and similar arguments have been made before, including this paper by NASA astrobiologist David McKay (which Nature’s Great Beyond blog notes is not cited by Hoover).

As scientists began reacting to the announcement, some have been more charitable than others. Bad Astronomer Phil Plait said he was extremely skeptical, and “we are a long, long way from knowing whether the claim is valid or not”; at NPR, astrophysicist Adam Frank said it’s not proof, but “not disprovable either.”

On the other hand, biologist and blogger PZ Myers called it “garbage,” wondering why it was getting any attention at all:

“I’m looking forward to the publication next year of the discovery of an extraterrestrial rabbit in a meteor. While they’re at it, they might as well throw in a bigfoot print on the surface and chupacabra coprolite from space. All will be about as convincing as this story.”

Rosie Redfield, who was one of the first to critique NASA’s controversial arsenic-eating-bacteria paper, declared “Executive Summary: Move along folks, there’s nothing to see here.” And over at MSNBC, Alan Boyle talks to David Morrison, senior scientist at the NASA Astrobiology Institute at Ames Research Center, who said “Perhaps the publication came out too soon; more appropriate would have been on April 1.”

For its part, the Journal of Cosmology has invited commentary from 100 scientists, and is publishing them on its website. MSNBC’s Boyle hits the highlights so far, while noting that they’re not in chronological order — is the journal publishing only some of the commentaries?

The J of C is edited by Rudolf Schild, a professor of cosmology at the Harvard-Smithsonian Center for Astrophysics who has written almost 300 scientific papers. It has been drawing skepticism since at least last fall, showing up on discussion boards and in the science blogosphere. Critics say its website looks like a student’s science project; Myers said it looks like it was “sucked through a wormhole from the 1990s.” But the editorial board includes some impressive names.

Many other scientist bloggers have asked why such a potentially groundbreaking paper would be published in an open-access online journal, instead of a prestigious publication like Science or Nature. And that’s when it starts to get weird.

Schild sent another press release addressing that question, saying it was “tantamount to school-yard taunts by jealous children.” The journal claims to be the victim of a conspiracy by NASA, the American Association for the Advancement of Science, Nature and other organizations. At Wired, David Dobbs tries to make sense of it all.

Weirdness or not, Hoover’s claim is certainly an extraordinary one. But as Carl Sagan once said, extraordinary claims require extraordinary evidence. It seems unlikely that this evidence will fit the bill, at least as far as the mainstream science community is concerned.