FYI: Why Do Ducks Have Orange Feet?

Actually, many species of ducks have feet—and legs!—tinted a bluish green or gray. But for the ducks that do have... 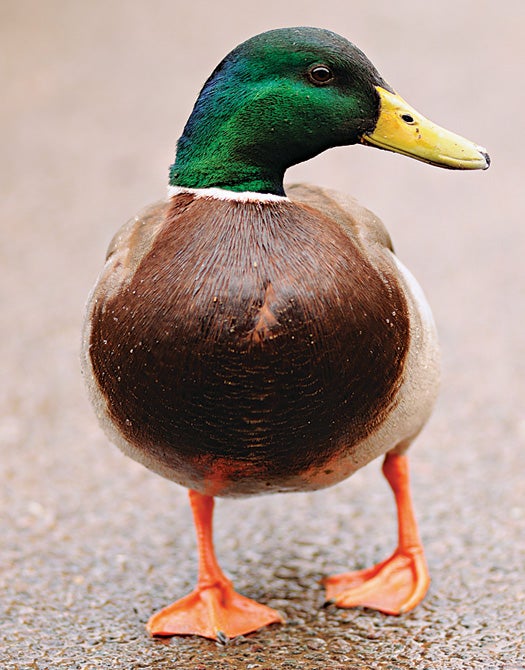 Actually, many species of ducks have feet—and legs!—tinted a bluish green or gray. But for the ducks that do have orange feet, well, it’s all about attracting the ladies. Chicks dig orange.

Kevin Omland is an evolutionary biologist at the University of Maryland at Baltimore County, and he knows as much about mallard-duck coloring patterns as anyone; it was his graduate thesis. “I looked at male mallards and thought, gosh, they exhibit so many wonderful colors, I wonder which ones females care about,” he says. Do lady ducks lust after the males’ green head plumage? Or maybe it’s the blue patches on the males’ wings? Then again, what female duck can resist a nicely proportioned set of white “neck tie” feathers? After four years of documenting mallard courtships, Omland found that none of those mattered. All they cared about was the brightness of the guy’s yellow-orange bill.

Bright orange coloring suggests that a male duck, also known as a drake, is getting all his vitamins, particularly carotenoids, such as beta-carotene and vitamin A, antioxidants that can be beneficial to the immune system. “This indicates that his behaviors and genes are good enough for him to recognize and eat the right food, or that his immune system is strong enough to produce bright orange legs,” Omland says. “The female sees this as a very attractive trait to pass on to her offspring.”

Omland’s work only looked at drakes’ bills, but he thinks there’s enough circumstantial evidence to say that ducks check out each other’s feet, too. “Blue-footed boobies have, obviously, very blue feet, and it’s very well documented that they use their feet in courtship and that females do care about the coloration of males’ feet,” Omland says. “Perhaps mallards, like the boobies, have a foot fetish.”

Animals
Ask Us Anything
Biology
Evolution