A World Without The Winter Olympics

How climate change will make the Games impossible for certain cities. 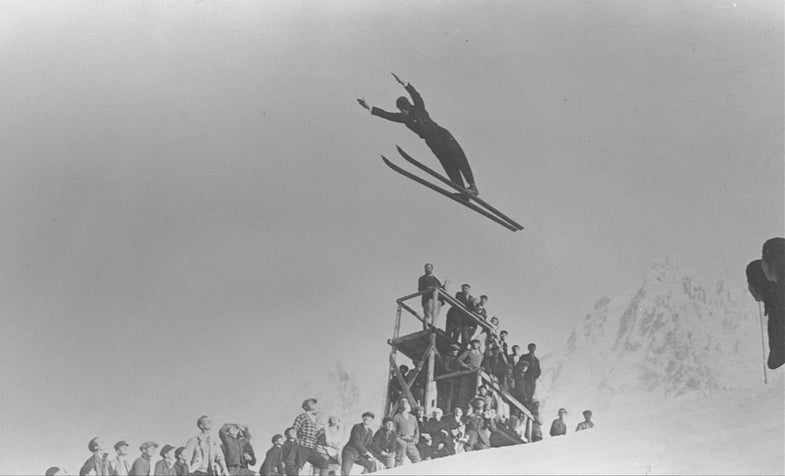 In 1924, at the French ski resort of Chamonix, the very first Winter Olympics got off to a precarious start. “A new thaw which set in on Monday has kept the skaters off the Olympic ice rink and even threatens to delay the start of the winter games,” wrote Sparrow Robertson in The New York Herald. “At Les Bossons, where the ski-jumping is scheduled to take place, the snow is so thin that it would be dangerous to permit any jumping until there has been another fall.”

For the past few decades, Olympic organizers haven’t waited around. Instead, they’ve beaten back an unfavorable climate by making snow themselves. Snow guns pointed at Sochi’s ski jump have been running around the clock since December. Technicians plan to use 500 snow machines altogether, plus artificial snow from last year stockpiled under insulating blankets. The Winter Olympics, after all, hinge on the weather (at least the events that have not yet moved to refrigerated tracks or buildings). But not even advanced snowmaking equipment will save them in the future. Organizers face an impending climate that’s too warm for even that.

A team of scientists from the University of Waterloo in Canada and Austria’s Management Center Innsbruck recently set out to calculate the effects of global warming on future Winter Olympics sites. They found that if emissions continue apace, only 10 of the 19 sites that previously held Winter Olympics could reliably host the Games by mid-century. By 2080, only six could. The odds are slightly better, but still dire, if global greenhouse gas production drops to the low-emissions scenario described by the Intergovernmental Panel on Climate Change (IPCC)—only about half the sites would be reliable in both time frames. 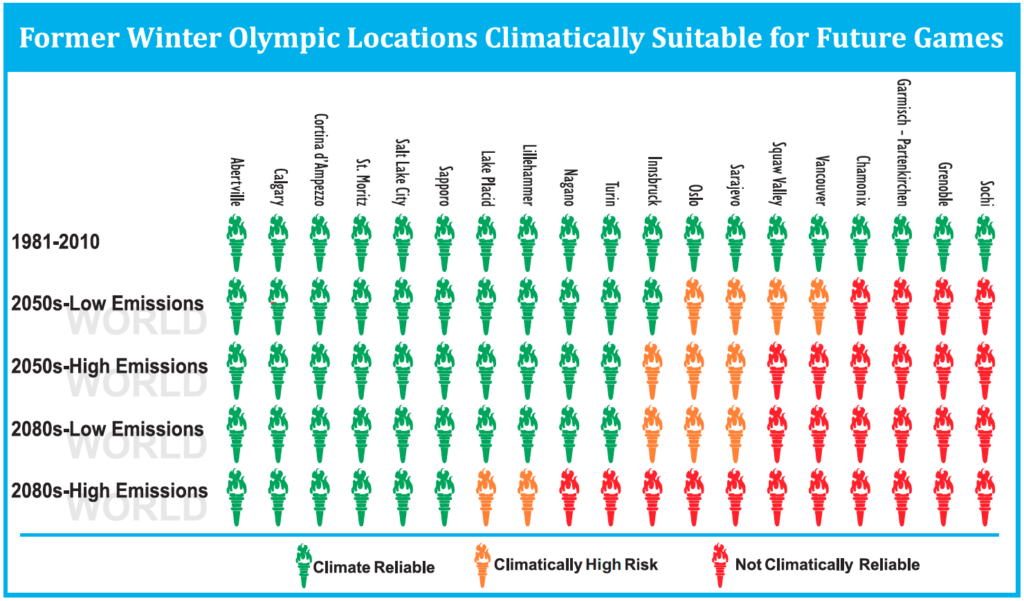 “What are really at risk are the outdoor events, the ones that require snow,” says Daniel Scott, director of the Interdisciplinary Centre on Climate Change at the University of Waterloo. “You can’t refrigerate a ski run. The only thing that’s allowed a place like Sochi to hold the Games are those kind of weather risk-management strategies that have been developed.”

The research, based on two studies accepted to the journal Current Issues in Tourism, combined meteorological data with IPCC climate change projections to examine future conditions at each site. First, the scientists looked at the probability that the daily minimum temperature at the main competition elevation would remain above freezing. “With snowmaking, you can bring the precipitation to the hill,” Scott says. “Every game since the late ’80s has had advanced snowmaking built in. They’re not relying on natural snow—they want to know, can I make the stuff?” If you can’t make snow at night faster than it melts during the day, the Winter Olympics will be a bust.

Where might we hold future Winter Olympics? Not at Sochi or Vancouver.

Then, the team identified whether sites could maintain a snowpack of at least 30 cm at higher elevations (requiring temperatures cold enough to manufacture snow a month before the Games begin). That 30 cm figure is conservative, Scott says. It’s the absolute physical minimum a ski area will use on fairly smooth terrain, such as meadows. Alpine areas—like those throughout the Western U.S. and Canada—may in reality need up to a meter of snow to cover rough terrain.

So using those parameters, where might we hold future Winter Olympics? Not at sites like Sochi and Vancouver, which are coastal and so warmer to begin with. They will be high-risk or unreliable by mid-century, under even a low-emissions scenario. Mountain communities such as Squaw Valley, California, and Innsbruck, Austria, which rely on ski terrain at fairly low elevations, will be dicey too.

Sites farther from the coast (naturally colder), with high elevations, will do better in the long term. Those include Salt Lake City, Calgary, and St. Moritz, Switzerland. But the solution isn’t as simple as returning to the alpine hosts of early years, says Scott, because the Games have grown exponentially—in terms of events, spectators, and media. Climatically suitable towns in the Alps, for example, are no longer big enough to accommodate that many people.

Nor would organizers want to shrink the size of the Games by raising the bar on participation. That would go against the spirit of the Olympics by precluding athletes around the world who aren’t at the most elite level. Scott suspects future Winter Olympics will instead be more spread out. Spectators may find themselves taking long train rides between the locations of various events. In the meantime, the Olympic committee might be wise to prioritize cities, such as Salzburg, Austria, that are climatically reliable now but won’t be by mid-century.

The data show that the average February daytime temperature at Winter Games locations has already been steadily climbing, from about 32°F in the 1920s- 50s, to 38°F in the 1960-90s, to 46°F in the 2000s (partly reflecting organizers’ willingness to move them to warmer locations). Anecdotally, athletes have noticed a difference. During the cover shoot for Popular Science‘s February issue, we asked alpine skier Ted Ligety whether he worried about climate change. He told us he had just returned from his first race of the season on the Rettenbach Glacier in Soelden, Austria. “It’s crazy how much it’s changed over the last five years,” he said. “That’s not long at all.”

Given enough money and energy, technicians could try to push the limits on some locations with snowmaking. But around or just above the freezing point, the quality of the snow starts to degrade, and it becomes slow and rutted. “From a competition perspective, athletes would detest that,” Scott says. “And it becomes dangerous at some point.” He speculates that somebody may eventually develop a totally temperature-independent artificial snow that behaves like the real thing—but as far as he knows, it’s not on anyone’s drawing board, and from an athlete’s perspective, it’s something Chris Steinkamp, the executive director of Protect Our Winters, likens to the appeal of a genetically modified vegetable.

Steinkamp, whose organization was founded by snow-sports athletes alarmed by the effects of climate change, hopes the research will be motivating. “Hopefully instead of continually trying to beat climate change with advanced technologies, such as snowmaking,” he says, “it will serve as a wake up call to the IOC and world leaders that major commitments to carbon reductions need to be made. Now.” Otherwise, as the scientists point out, it would be extraordinarily difficult to celebrate the Winter Olympics bicentennial in 2124.