There’s a better way to use rock salt on snow

Deicers harm waterways in a number of ways. How you use them can make a difference. 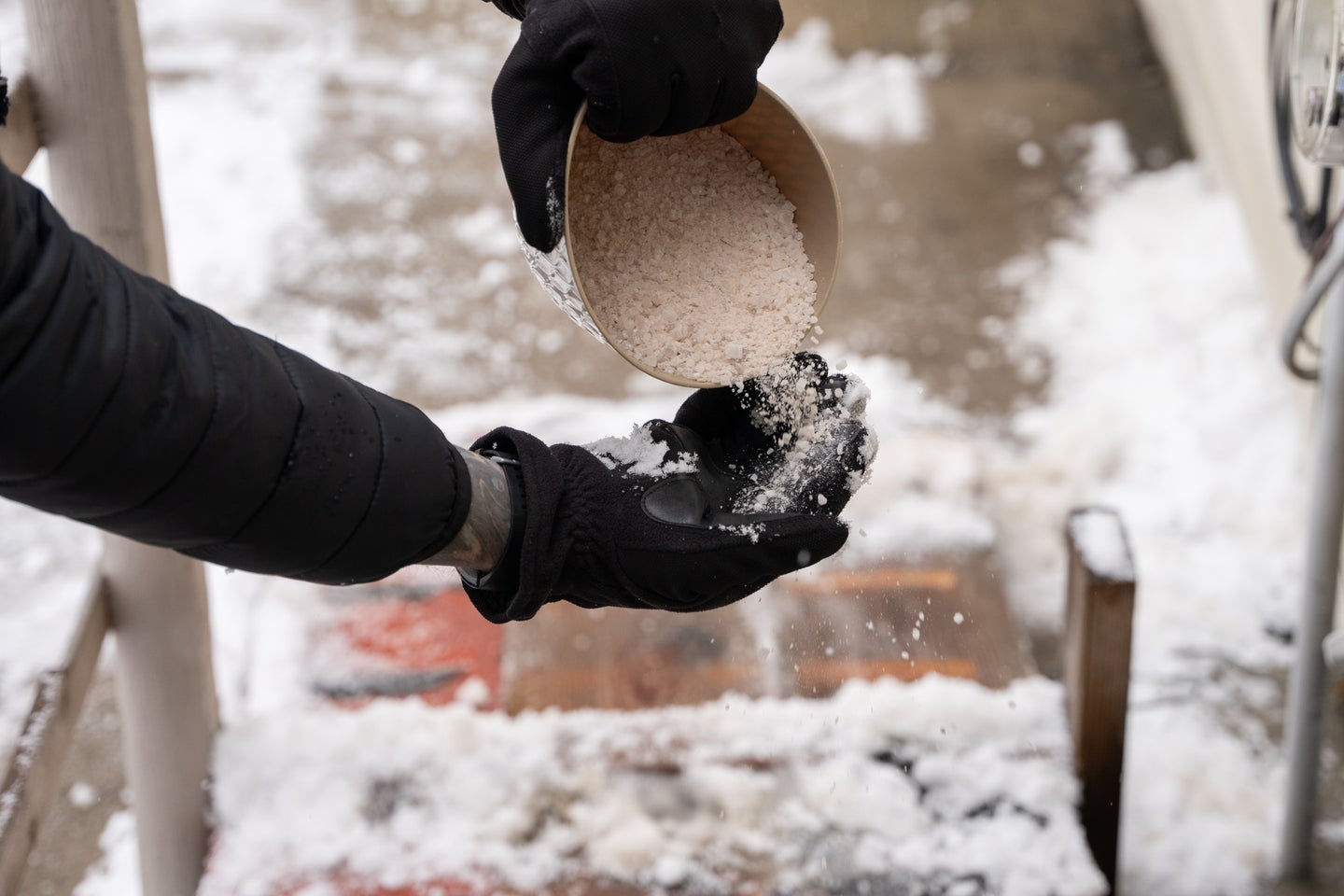 The point of rock salt and other deicers is to free up the ice from your driveway or walk, not to melt it down. Deposit Photos
SHARE

Whenever snow hits the pavement in the US, we throw salt on it.

The tradition started with state highway authorities after World War II, and has since been picked up by municipal plow trucks and homeowners. These days, Americans use 25 million tons of salt each year to deice roads and sidewalks after a blizzard or deep freeze. But are we spreading it correctly, and should we be spreading it at all?

Most store-bought versions of deicing salt, or rock salt, consist of plain old sodium chloride. That might seem harmless, given that humans consume it on a daily basis—but as it builds up in soil and water over time, it has the potential to turn nature toxic. The chlorides can spur heavy metals like lead to leach into groundwater, rivers, and more, says Xianming Shi, a professor of civil and environmental engineering at Washington State University. More directly, the salt seeps into wells and aquifers, making our drinking water more saline over decades.

Some states, like Rhode Island, have tried to mitigate the issue by mixing in sand with salt or pre-treating highways before a snowstorm. Shi has also worked with authorities in Alaska to implement alternative brining solutions. In 2019, he and his lab developed an additive from discarded grape, apple, and cherry skins that binds with ice when mixed in with rock salt. Though it doesn’t eliminate the use of chlorides, it does minimize it by as much as 30 percent. Their “green chemical” is now being licensed for production by a company in Massachusetts.

But for the ordinary person at home, the eco-friendly options are limited. “There are some ‘organic’ deicers that are chloride-free, but they’re much more expensive than what you’d regularly buy,” Shi says. Plus, there’s an important downside. Mixtures that sub in sugar or nitrogen for chlorides, like the ones made with beet juice, can have a different toxic effect on water: They feed algae and other microbes, leading to hypoxic conditions that harm fish and insects.

Shi’s advice? Be smart—and sparing—about rock salt use. “Homeowners’ practices are not well-informed,” he says. “They apply way too much [deicer].”

Essentially, the salt should break the bonds between the ice and the pavement to make it easier to shovel, plow, or run a snow blower. Many people throw gobs of sodium chloride on frozen patches, when all they need is a thin layer of crystals or liquid brine. “If you can see salt particles on your driveway or sidewalk, that’s too much,” Shi explains. He also mentions a saline pre-treatment as an option to reduce the use of other chemicals (by up to five to seven times).

Those who have a stream or open body water on their property should take extra care. Try not to treat the areas directly around it, and be safe with neighboring surfaces that could produce runoff. “You can directly impact that environment in a good or bad way,” Shi says. Cutting back on salt also prevents corrosion on cars, infrastructure, and puppy paws.

Of course, these are short-term solutions—but they’re all we have for the time being. “If you look at the trend [of chlorides in water], it’s almost impossible to reverse,” Shi says. “Basically in 50 years, our grandkids could be drinking saltwater.”

“It’s not just the responsibility of state transportation departments. Homeowners and commercial entities with big lots like Costco need to play a role too,” he says, “It will take a whole village.”