The Great Lakes are higher than they’ve ever been, and we’re not sure what will happen next

Lakeside living comes with a new premium: flooding and lots of uncertainty. 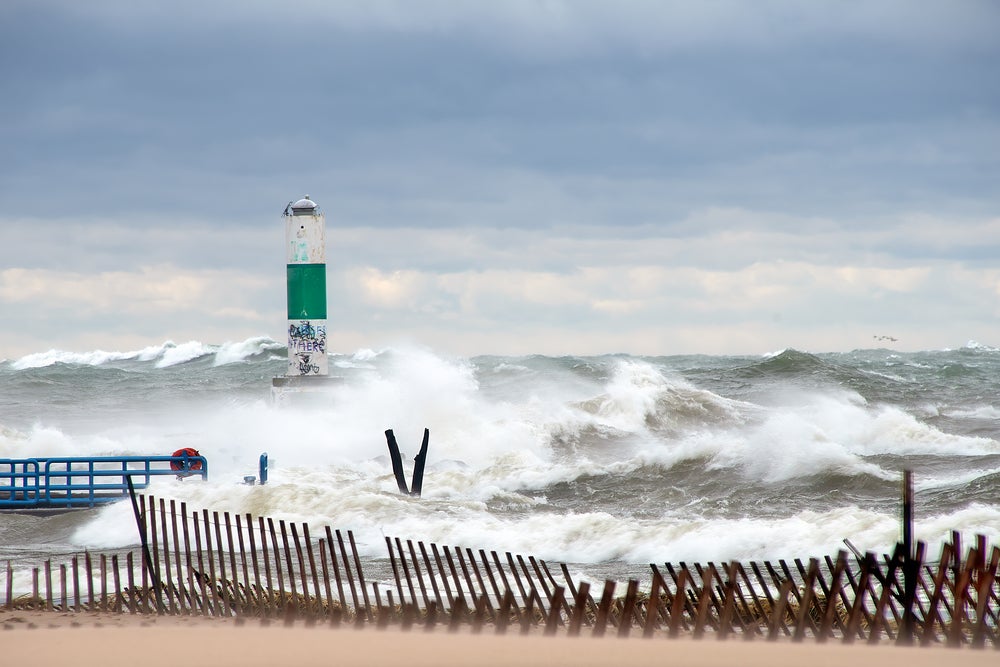 A storm on Lake Michigan isn't the same as a storm on the ocean: There are different atmospheric factors and water-flow patterns that determine its ferocity. Jentara/Deposit Photos
SHARE

A single road near Lake Superior connects Michigan’s Keweenaw Bay Indian Community to the rest of the state. During major rains, rocks and wood litter the route and cut off travel in and out. Over the summer, drivers have to take a 30-minute detour; in the winter, the trip can take more than two hours. Work crews eventually clear the path with plow-like machines, freeing the tribe’s movement.

Living at Superior’s southern edge, the Keweenaw Bay Indian Community (KBIC) manages close to 19 miles of its shoreline. They rely on it for tourism revenue, drinking water, and fish for the tribal hatchery. A full lake is good news for KBIC, but if the levels spill over, it could spell danger for the residents’ subsistence.

This precarious balance shifted toward disaster during the 2018 Father’s Day flood, when more than seven inches of rain pounded the area in just three hours. In the storm’s aftermath, fecal runoff plagued local beaches, teeing up an explosion of harmful E. coli bacteria. The Michigan Health Department closed several swimming spots on the state’s Upper Peninsula, but they didn’t offer to test the tribe’s domain. That led KBIC’s Water Resources Specialist Stephanie Cree to take matters into her own hands. After all, the health of Lake Superior is an essential measure when people’s livelihoods depend on it.

“A lot of the community relies on fish for food,” Cree says. “We have a lot of tribal and commercial fishermen who rely on fishing for income.”

Cree instituted weekly beach monitoring to check bacteria levels, soon shuttering two of the reservation’s beaches. As far as she knows, it was the first such closure in Keweenaw Bay’s modern history. And it likely won’t be the last, given that the region is becoming more unstable by the day.

Across the 5,241 miles of Great Lakes shoreline, tribes, cities, vacationers, and wildlife managers are grappling with devastating flooding and erosion. It’s a different story from the nation’s coasts, where rising seas are creeping inland at a steady pace. Instead, the five Great Lakes fluctuate naturally by season—though over the past four decades, they’ve bounced both above and below historic records. Experts suspect that climate change is partially driving these shifts, but because of the complex nature of the water, it’s hard to isolate human factors from the rest of the turbulence. That leaves states like Michigan with little room to prepare for the lakes’ next turn.

To understand how much the Great Lakes have seesawed, one needs to go back to 1860, when the U.S. Army Corps of Engineers started taking monthly averages of the water levels. Based on those measurements, the lakes have stayed within a modest six-foot range of their typical levels. But the pattern of spikes demands closer attention.

Since September 2014, the planet’s largest collection of freshwater has broken and re-broken most of its long-term records. Last June and July, Lakes Superior, Erie, Ontario, and “the sixth Great Lake,” St. Clair, all surged above century-old highs. Meanwhile, Lakes Michigan and Huron hit new peaks this April, after an unusually wet winter pushed their levels three feet above the monthly average.

Some of these patterns are inherent to the cycles that shape the Great Lakes, says Chin Wu, an engineer at the University of Wisconsin, who’s worked with the Army Corps of Engineers and National Oceanic and Atmospheric Administration (NOAA) to study the system. The basin’s levels usually increase in spring with heavy precipitation and runoff from snowmelt. They continue to ramp up through mid-summer, as hotter temperatures cause water molecules to expand somewhat, before dropping off in fall as cold air accelerates evaporation.

“The Great Lakes are very complex,” Wu says. “It’s not like the simple formula for ocean levels, which keep going up.”

The recent string of record highs relates directly to extreme ice cover from 2013, 2014, and 2015, says Greg Mann, science and operations officer at the NOAA National Weather Service Forecast Office. Competing atmospheric processes, like evaporation and precipitation, usually keep the Great Lakes system in equilibrium, he notes—but when one of those reactions doesn’t go as planned, the water builds up too quickly. That’s exactly what happened during the 2014 polar vortex, when the region froze over and evaporation took a hit. Months later, the ice thawed into the lakes, just as the heavy spring rains arrived.

The opposite is also true, Mann says: Reduced precipitation and low ice cover can speed up evaporation, causing levels to bottom out. In fact, before the recent stretch of highs, the Great Lakes experienced its longest sustained period of below-average waters. In spring of 2013, Lakes Huron and Michigan reached the nadir of a 15-year plunge, posing a challenge for industries like shipping and hydropower.

Less understood are the freak meteorological events that feed off already-dangerously high waters. Meteotsunamis will randomly materialize in the Great Lakes, lasting anywhere between a few minutes and two hours. The storm-driven waves usually top out at a foot, but they can still cause major damage; in 1954, an abnormally tall meteotsunami pounded Chicago’s shoreline and killed seven people.

Looking back on all the dramatic highs and lows of the past decade, it seems impossible to project the future of the tides. The best bet is to dig into data and predict a wide range of outcomes for each lake. Currently, researchers from NOAA and the Canadian Hydrographic Service are tracking the tiniest changes in water levels with gauge stations positioned throughout the five Great Lakes (there are 53 total in the US). The sensor-packed devices allow scientists to keep close tabs on the amount of water flowing in and out of the basin. That itself is a tall order: Lakes Michigan and Huron alone take in an average of 139 Olympic swimming pools’ worth of runoff and precipitation per minute.

From that data, experts can try to learn if climate change is gaming the Great Lakes system, though they still won’t be able to draw any solid correlations. Studies have already linked climate change to shifting local precipitation levels. The region’s annual rain and snow totals have shot up by 13.6 percent since 1951, and as of last October, the Great Lakes experienced its fifth wettest year in a row. The coming decades could bring even damper winters and springs.

What’s more, the region is losing swathes of frozen ground, much like the Arctic. Recent NOAA maps show that the basin’s total ice cover shrunk by 69 percent between 1973 and 2017—a trend that might link back to warmer water temperatures in summer. Less ice means more waves hitting against land, resulting in erosion on Chicago beaches and coastal hamlets. In January, a cottage in White River Township, Michigan, toppled over a bluff and collapsed in the waves, a tragedy that could signal the new normal for lakefront life.

All in all, the country’s longest freshwater coastline isn’t what it used to be. Some parts of Michigan’s shorefront are eroding at an average of a foot a year, and the state has spent millions of dollars restoring damage on campgrounds, dunes, and beaches.

There’s also a symbolic importance embedded in Michigan’s coasts. Locals take ownership of and advocate for the Great Lakes’ protection, says Nick Assendelft, public information officer at the Michigan Department of Environment, Great Lakes, and Energy. “It’s in the DNA of Michiganders to have a connection with water.”

Michigan officials are monitoring development in high-risk erosion areas, though only 10 percent of the state’s coastline currently falls under this protection, says Richard Norton, a professor of urban and regional planning at the University of Michigan. Meanwhile, some residents are trying to salvage their lakefront homes by installing rock or steel sea walls to guard against rising swells. These can cost property owners up to $150,000 depending on the material and property size, says Beth Foley, a Michigan real estate agent who specializes in waterfront homes. In particularly treacherous zones, people have even picked up their homes and dragged them several yards away from the lake.

Besides being impractically pricey, sea walls and other armoring measures can counteract themselves by redirecting waves in a way that accelerates erosion. Wu, the University of Wisconsin engineer, also says they eat into prime coastal habitat by churning up waters that displace sand from the shallows. With that in mind, researchers are seeking “soft” solutions that don’t simply cut communities off from the Great Lakes, including “living shorelines” made of natural materials such as flora, rocks, and oysters. The idea is far from new: Indigenous communities around the globe have traditionally used vegetation to fight erosion, and cities in Washington, North Carolina, New York, and Alabama are already putting the non-rigid buffers to use.

For the Keweenaw Bay Indian Community, hard and soft solutions work in tandem. The tribe hired a company to install boulders and a loose foundation of stones called rip rap around their gas station on Lake Superior. And for more than a decade, the natural resource department has led restoration efforts like seeding native grasses as a screen around local soils and wetlands. These measures also increase habitats for birds and butterflies, a win-win for the Superior ecosystem.

Ultimately, the stakes are high for KBIC. The tribe’s most valuable assets are based in and around the lake, both in the fisheries and the sands that hold centuries-old burial grounds and historically important plants. When the floodwaters spill onto the roads, they don’t just jeopardize the community’s economic well being—they threaten its cultural salience, too.

Moving forward, there’s no telling what the lake waters will do. They could wax and wane as they have over the past century, with slight deviations from global warming and regional cold snaps. says Eric Anderson, a physical oceanographer at NOAA’s Great Lakes Environmental Research Laboratory. But unlike the accelerating trajectory of sea-level rise, the Great Lakes levels probably won’t follow a clear path.

In the short term, the Army Corps of Engineers is forecasting a wide range of outcomes for each lake. Overall, they’re expecting a similar situation across the lakes for the next six months, says John Allis, chief of the Detroit District Great Lakes Hydraulics and Hydrology Office. “We’ll either be dealing with record highs or just below them.”

How to deal with those highs is a complex issue of its own. Take KBIC for example: The Father’s Day Flood propelled its natural resources department to organize a plan for future emergencies (a mandatory component to vie for federal disaster funding). Cree, their water expert, thinks nearby tribes may follow suit.

“This is all something new,” she says. “We haven’t had these types of issues before because storms are happening more frequently.”

And while the Army Corps of Engineers’ models may give communities a hint of what to expect, the future of the region can’t be determined by a curve on a graph. To really understand what’s happening with local water levels, Mann, the NOAA operations officer, says, people need to gain an appreciation for the intricacies of the Great Lakes. Warming and cooling don’t pull all the strings in the system; neither do natural cycles likes rain and evaporation. “Predicting outcomes with any certainty is nearly impossible,” Mann says. “I know that isn’t satisfying, but that is how things work.”

Correction: Due to an editing error, the house that collapsed in White River Township, Michigan, was originally attributed to Battle Creek, Michigan.