Dispatches From The Arctic: The Science And Geopolitics Of A Warming Arctic

“Let's face it. Sea level (rise) is going to eat our lunch.” 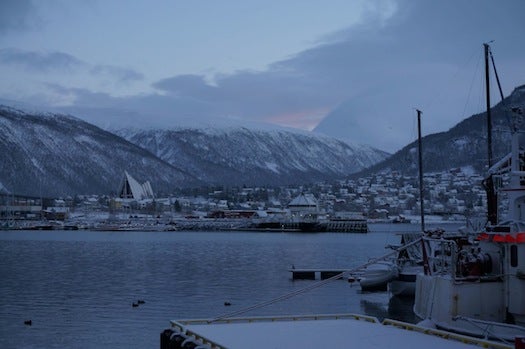 DISPATCHES FROM THE ARCTIC*

This series explores the science and implications of global warming in the North Atlantic Arctic. Boulder-based writer Susan Moran is filing live reports from the Arctic Frontiers conference in Tromsø, Norway.

In this coastal Arctic city of Tromso, Norway, where sunrise and sunset merge into a multi-hour winter glow, and where twenty-something women proudly roam the ice-coated streets under the sub-freezing black sky wearing stiletto heels and little else, nothing seems too bizarre. But I was still struck to see uniformed Navy generals, politicians and bureaucrats (from Russia, China, Norway, the United States, and many other countries), scientists, energy and fisheries industry executives, and environmentalists all converging at a university here to attend a conference called the Arctic Frontiers.

Perhaps no other topic is more politicized than climate change, so it makes sense that this “gateway to the Arctic” would host a conference on “Geopolitics and Marine Production in a Changing Arctic.” The gathering spans five days and covers issues ranging from the state of climate science in the Arctic Ocean, shifting fisheries politics as mackerel and cod swim northward to colder waters, and how indigenous coastal communities could reap the benefits–or suffer the failures–of mineral and oil and gas extraction. 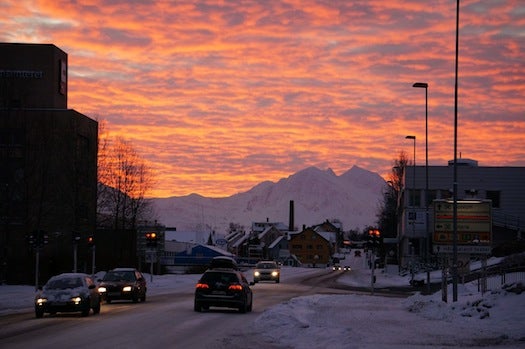 On the opening day, platitudes from politicians flowed as plentifully as strong coffee. But at least most of them–including China’s ambassador to Norway, Zhao Jun–professed up front that climate change is real. Some of them, particularly European politicians, nudged the United States to act more aggressively to acknowledge and combat climate change. Maybe they didn’t get a chance to hear President Obama make up for lost time by declaring in his inaugural address on Monday, “We will respond to the threat of climate change.”

The Arctic Ocean will be largely free of ice in summer in the next 30 to 40 years. Most of the science-centered talks come later in the week. But members of the Arctic Council, an intergovernmental body consisting of representatives of the eight states that hold Arctic territory plus six organizations representing indigenous communities in the region, announced their commitment to climate change research and education. They released a new report, called “Snow, Water, Ice and Permafrost in the Arctic.” It draws from a much larger report issued in 2011 by the Council’s Arctic Monitoring and Assessment Program, and it highlights several alarming developments in the Arctic while projecting an accelerated trajectory for the future.

Among the report’s projections:

-Air temperatures will continue to rise faster in the Arctic than elsewhere in the world, with models suggesting that temperatures could be 3 to 6 degrees Celsius higher than they are now by the end of the century.

-The snow season will shorten by as much as 20 percent over most of the Arctic, even though snow will get deeper in many places.

-Permafrost, a major carbon sink in the Arctic, will continue thawing.

-The thickness and extent of sea ice will continue to decline and the Arctic Ocean will be largely free of ice in summer in the next 30 to 40 years.

“That’s probably the take-home message, that things are accelerating, and that there are uncertainties about how much the acceleration will be, and that we don’t have the right models to describe these changes,” said Gustav Lind, Sweden’s Arctic ambassador who leads the two-year chairmanship of the Arctic Council. Canada will soon assume the chairmanship role.

Robert Corell, who was the lead scientists on a four-year research project under the Arctic Council, called the Arctic Climate Impact Assessment and completed in 2005, told me at a conference reception Sunday night the new report reflects how the Council, which has no regulatory authority, is becoming more proactive in trying to educate and influence governments about the regional and global impacts of climate change in the Arctic.

Susan Moran is a freelance journalist based in Boulder, Colo., covering energy development, climate science, agriculture, environmental health and other issues. She writes for the New York Times, The Economist, Nature and other publications. And she co-hosts a weekly science show on KGNU community radio, called “How On Earth.”

Arctic
dispatches from the arctic
tromso