Tired of Repetitive Arguing About Climate Change, Scientist Makes a Bot to Argue For Him

Getting into a climate change debate on Twitter could be even more exhausting than it sounds now that a software... 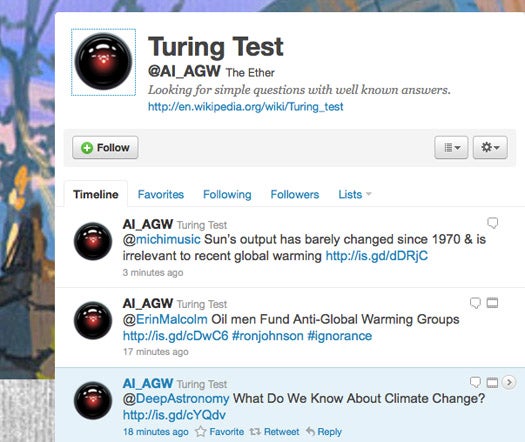 Getting into a climate change debate on Twitter could be even more exhausting than it sounds now that a software developer named Nigel Leck has automated the process. Tired of arguing with climate change deniers in 140 character quips, the programmer wrote a script to do it for him. Chatbot @AI_AGW scans Twitter every five minutes searching for hundreds of phrases that fit the usual denier argument paradigm. Then it serves them up some science.

Those responses are pulled from a database of hundreds of responses that the software matches up to the argument made by the original tweeter. Those who claim the entire solar system is warming are met with something like: “Sun’s output has barely changed since 1970 & is irrelevant to recent global warming” followed by a link to corresponding scientific research.

People on the other end of an argument don’t usually pick up on the fact that they are arguing with a program and will continue the argument. And AI_AGW continues to fire back responses. Even when the tweeter keeps throwing the same argument at the chatbot, it will respond with a variety of different arguments and links.

There are some issues to troubleshoot apparently. For one, the chatbot sometimes seizes on a false positive, firing off an argument to someone who is simply commenting on the weather. Part of this problem: sarcasm. When climate change believers post something clever but facetious AI_AGW sometimes reads it as serious climate change denialism and leaps into the fray. Leck does his best to apologize when the ‘bot picks a fight with someone who didn’t ask for it, but it’s nothing a sarcasm recognition algorithm can’t fix.