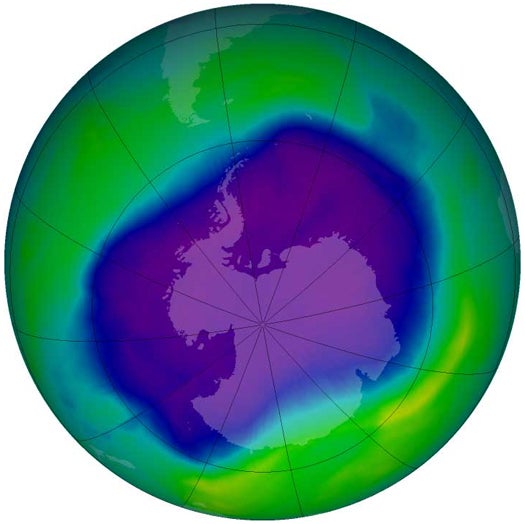 In 1985, scientists from the British Antarctic Survey found a giant hole in the ozone layer of Earth’s atmosphere over the South Pole. This discovery prompted a largely successful international effort to ban CFCs, the chemicals largely responsible for man-made thinning of the ozone layer.

Unfortunately, a new analysis from Scientific Committee on Antarctic Research (SCAR) suggests that stopping ozone depletion may actually increase global warming and speed up sea level rise. This discovery pits two important environmental missions against each other, while highlighting the complexity of our effect on the planet.

SCAR’s findings indicate that the extra radiation allowed through the atmosphere by the depleted ozone above Antarctica created wind patterns that cooled the eastern, more densely ice-covered, section of the continent. Those weather patterns partly protected Antarctic ice from the ravages of global warming.

Now, as the hole in the atmosphere heals, those wind patterns will shift, fully subjecting the Antarctic ice to the effects climate change. According to SCAR, that means a rise in sea levels up to 4.6 feet greater than earlier predictions.

Although often confused in the mind of the public, and in news reports about the environment, climate change and ozone depletion are largely unrelated phenomena.

Atmospheric ozone, a chemical consisting of three oxygen molecules, protects animal life from cancer-causing UV radiation (hence the worry over its disappearance). Man-made chemicals like certain aerosol sprays and refrigerator coolants chemically react with ozone, creating new compounds that don’t block out the radiation. While some of those chemicals are also greenhouse gases, their contribution to global warming is insignificant when compared with other greenhouse gases like carbon dioxide, methane, and water vapor.

The campaign to eliminate ozone depleting chemicals, starting with the 1978 ban enacted by the US, Canada, and Norway, and the subsequent 1989 Montreal Protocol banning ozone-depleting chemicals internationally, were some of the biggest triumphs of the environmental movement in the last century. Today, both acts serve as inspirations and templates for subsequent treaties and legislation that attempt to regulate greenhouse gas emissions.

The SCAR report’s revelation that fixing one pressing environmental problem may accelerate another dangerous problem puts efforts to prevent rapid environmental change in a bit of a pickle. As the leaders of the world’s nations prepare to hash out future environmental agreements, revelations like this can’t help make me wonder how today’s solutions might become tomorrows concerns.